Each year’s February issue of Perspectives tries to evoke memories of the most recent annual meeting—January 5–8 in Denver, in this case—through as many conference-inspired news stories, essays, and photographs as can fit into 40 pages. The annual meeting has evolved radically to incorporate innovative session formats, a broadening spectrum of research topics and methodologies, opportunities to exchange ideas about teaching, and most importantly, a far more diverse representation of our community. 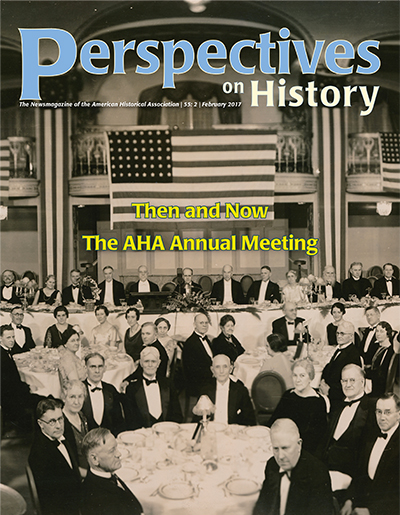 The deep past of the annual meeting shows a markedly different reality, reflecting the history of exclusivity going back to the Association’s founding in 1884—an era when academic disciplines coalesced to exclude people not considered professionals. The AHA can’t shy away from this history if it’s to move forward in its mission to “advancing history and historical thinking for the benefit of all.”

So for 2017’s February issue, we gesture to the past, acknowledging where we came from and thinking about where we might still go. We asked longtime attendee Roy Ritchie, the renowned former research director of the Huntington Library, to share memories of the first annual meeting he attended (as a UCLA graduate student) and to assess the meeting’s current trajectory. He more than obliged: “How the Minds Have Met” is a personal reflection on how the annual meeting has become more democratic, how AHA Program Committees have functioned, and how politics have affected trends in research. The positive changes go much further than no-smoking policies, says Ritchie.

This year’s AHA annual meeting was the first one held in Denver, and the conference wasn’t short on drama, as those who braved the unseasonable weather can attest. To provide context for our usual smorgasbord of photographer Marc Monaghan’s shots of historians taking care of historian business, I sketched out some AHA17 phenomena. Highlights include an interview with the historian/archivist of the National Western Stock Show and Rodeo, which happened at the same time as the annual meeting. For a true behind-the-scenes take on the annual meeting, see Kritika Agarwal’s profile of meeting coordinator Debbie Doyle on AHA Today, too. Keep checking back for even more photos on the AHA Facebook page.

Other highlights of the February issue include two News stories inspired by two sessions (descriptions here and here) at the annual meeting. From Sadie Bergen comes “Getting Warmer: Historians on Climate Change and the Anthropocene,” and Kritika Agarwal presents “Historians as Expert Witnesses: Can Scholarship Help Save the Voting Rights Act?” Both stories are more than timely; they show that what historians do matters tremendously in public life. Trying to protect our planet’s biosphere from even more destruction, climate scientists and environmental historians are working together in fruitful ways. Historians also help geologists debate the merits of designating the Anthropocene as an official era. Historians have also provided lawyers the expert testimony they need to defend the right to vote in various court cases. Only historians, says Peyton McCrary, who recently retired from the Civil Rights Division of the US Department of Justice, have the requisite skills to assemble and analyze primary sources that can prove discriminatory intent behind laws challenged in court. In light of the controversial confirmation of Senator Jeff Sessions as United States attorney general, we would do well to consider the implications of expert testimony in the future.

AHA executive director James Grossman devotes this month’s column to exploring what the next few years might mean for the Association. The AHA received a great deal of attention for our recent statement condemning President Trump’s executive order on travel restrictions. Adapting his 2017 report to the AHA Council, Grossman details the accomplishments of the organization over the past year but ponders how the AHA might respond to the many requests for action we will undoubtedly receive in the future. The February issue also reprints the AHA’s recent statement on the right to nonviolent political action, approved at the annual meeting.

A final story inspired by an annual meeting session (described here) is AHA director of scholarly communication and digital initiatives Seth Denbo’s Viewpoints article about the question of how the discipline apportions credit for collaborative work among historians. We recognize other scholars in our footnotes and credit editors and peer reviewers in our acknowledgements, writes Denbo, so why does the model of single-authored scholarship still reign supreme? The provocative essay continues a debate many of us are having but are quite a long way from resolving.

For the many historians out there who have daydreamed about time travel or can’t get enough of Doctor Who, we enlisted the Omohundro Institute’s Karin Wulf to scrutinize the NBC show Timeless. This adventure series features a with-it historian offering expertise on great personages and advice on the ethics of changing history when one knows the outcome. Is Timeless a resource for those who need an excuse to procrastinate? Should PhD hopefuls be tested on the authenticity of period-costume fibers before they teach? Actually, Wulf does not answer these questions. But what she does write, we hope, is timeless.

There’s even more in February’s Perspectives. Please dive in, let us know what you think, and become a member of the AHA if you’re not already. And be sure to get your AHA18 proposals in by February 15. See you next year in Washington, DC.