“A woman is not a man; in many jobs she is a substitute—like plastic instead of metal—she has special characteristics that lend themselves to new and sometimes much superior uses.”

This is not, you can probably guess, a contemporary account of the advantages of employing women, but a World War II–era pamphlet, titled “You Are Going to Employ Women,” designed to prepare male supervisors for the influx of women into industry. The document currently sits alongside a number of artifacts on display in a new exhibit at the National Archives and Records Administration (NARA) that demonstrates the rough, and in many ways unequal, road to independence many Americans faced (although the scholar in me must point out the curators are never quite clear about how they define independence).

NARA recently unveiled this powerful new permanent exhibit, Records of Rights, along with the new David M. Rubenstein gallery space (Rubenstein recently received the Roosevelt-Wilson Award from the AHA).The exhibit strikes a balance between traditional forms of museum exhibition and experimentation with new technology and types of communication.

The curators divided the exhibit into three parts, with particular attention to the experience of African Americans, women, and immigrants, along with consideration of the fluidity of experiences between the groups. “Bending Toward Freedom” examines “how our nation and individual citizens struggled to reconcile the conflict between the promise of freedom and the realities of slavery and racism.” The “Yearning to Breathe Free” section “explores the notion of America as a nation of immigrants and the enduring debates on the rights of newcomers,” and “Remembering the Ladies“chronicles women’s efforts to gain the full rights of citizens and achieve economic self­determination.”

The first document to greet visitors is one of the four remaining copies of the Magna Carta (on permanent loan from David M. Rubenstein and the only copy available in the United States), dimly lit in a soft yellow glow and offset by two large touch screens offering visitors key information on the text, translations, and the ability to zoom in on a digital reproduction of the document. Positioning the Magna Carta at the entrance of the exhibit presents it as the origin of English law and the inspiration for the American founding fathers’ considerations of government and law after independence. 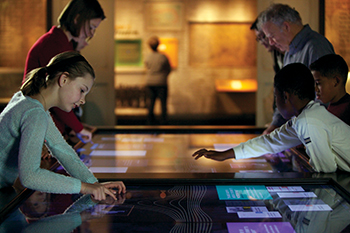 While priceless artifacts adorn the outer periphery of the exhibit, the center of the floor is dominated by a 17­-foot interactive touch­screen table (aptly titled “A Place at the Table”) that allows exhibit visitors to sort through more than 300 digital documents not represented in the physical exhibit, post a comment, or tag a document; giant screens that enclose the table allow visitors to share their feedback. The digital display table is innovative not only because of its technology, but also for the distinctive documents that were chosen; many relate to contemporary issues concerning the rights of schoolchildren, the LGBTQ community, and Native Americans, and constitutional issues concerning workplace rights not represented in the physical exhibit. The table does not sit in isolation in the corner of the room but is instead positioned directly in the middle of the rotunda, with the “founding documents,” as the exhibit calls them, encircling the table. This layout creates an opportunity for visitors to view contemporary struggles through the lens of the past.

Reviews for the exhibit have been mixed. The Washington Post praised NARA for charting a different course and offering an exhibit that showcases the past with a considerate eye toward the future. The New York Times, however, was more critical; Edward Rothstein criticized curators for acknowledging the “debated issues” surrounding each of the documents but neglecting to incorporate those conversations into the exhibit. Rothstein suggested that curators could have explored the ways in which the concept of “rights” has changed or taken a comparative approach by including the struggles of other nations.

If you cannot make it to DC to view the exhibit and play with the interactive table, NARA has developed an online exhibit with similar functionality (but different categories of rights).