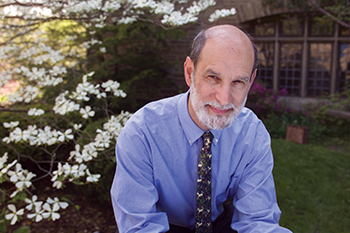 Michael Kammen, Newton C. Farr Professor of American History and Culture Emeritus at Cornell University, died on November 29, 2013. Kammen was born on October 25, 1936, in Rochester, New York, grew up in Washington, DC, and attended The George Washington University, from which he received his BA in 1958. He completed his PhD under Bernard Bailyn at Harvard in 1964 and became assistant professor of history at Cornell in 1965.

The trajectory of Kammen’s scholarship was unusual. He began as a historian of early America with a special interest in the politics of the British Empire. He wrote two books on the subject, A Rope of Sand: The Colonial Agents, British Politics, and the American Revolution (1968) and Empire and Interest: The American Colonies and the Politics of Mercantilism (1970). Between the two he published Deputyes and Libertyes: The Origins of Representative Government in Colonial America (1969). At first, he mainly taught early American history and supervised graduate students in the field.

But Michael’s imagination was too great and his curiosity too omnivorous to be limited to early American history. Fascinated by the career and historical imagination of his predecessor at Cornell, Carl Becker, he edited a superb edition of Becker’s letters: What Is the Good of History? (1973) and teased one of his grad students that after completing a PhD at Cornell, the student, like his mentor, would still be asking Becker’s question.

At that same time, as was his habit throughout his scholarly life, he had several major projects underway simultaneously, and the Becker volume appeared almost simultaneously with People of Paradox: An Inquiry Concerning the Origins of American Civilization (1972), an elegantly audacious book for a 36­year­old. A beautifully composed volume, People ranged over the entire history of early America to confront the problem of American exceptionalism in a stunningly original way. The book won the Pulitzer Prize in 1973 and sealed Kammen’s reputation for lush and stirring prose and the creative framing of historical questions. People of Paradox also revealed a lifelong trait: an unfailing eye for the little­known but telling quotation or anecdote. The book marked his emergence as a historian of American culture whose scholarship would not be contained by the 17th and 18th centuries.

Several more books on early American subjects soon appeared, but Michael began to turn in a new direction as well, embarking on a series on American historical memory. He began with the Revolution (A Season of Youth, 1978) and then moved on to the Constitution (A Machine That Would Go of Itself, 1986). Both books were remarkable examples of the scholar’s craft, exhibiting not only complete control of the history of the Revolution and of the making of the Constitution but also mastery of how those histories had been remembered in subsequent decades and centuries. The books were not interpretations of the Revolution and Constitution at all, in other words, but rather excursions into the long history of core American ideas and values from the 18th century to the present.

All the while, a blizzard of articles and reviews issued forth from Kammen’s aerie in Ithaca, published in newspapers, magazines, and scholarly journals on subjects that ranged across the whole of American social, political, and cultural history. Michael also had a penchant for publishing edited volumes of documents that he had employed in writing his major books. These companion volumes proved wonderful tools for other scholars and their students.

Michael’s multivolume project on memory reached its pinnacle with the publication of Mystic Chords of Memory: The Transformation of Tradition in American Culture (1991). A volume of vast sweep and breathtakingly comprehensive research, Mystic Chords signaled a new direction for Kammen’s scholarship, one that his friends had seen coming but which surprised the broader scholarly world: a deep dive into the history of American art. It was a natural direction for Michael to pursue. He was a collector himself, and his own books were physically beautiful, including important images linked to the themes he was addressing. But now he began to write about art and art criticism with the same unique and quirky perspective that had made his earlier work so provocative. Meadows of Memory: Images of Time and Tradition in American Culture (1992) thus opened another chapter in Kammen’s intellectual life.

A new flood of books flowed from his pen: a biography of Gilbert Seldes, a gorgeous book about the artist Robert Gwathmey, an absorbing and beautiful examination of the four seasons in American culture, a wide-­ranging book on American tastes and culture in the 20th century, a fascinating examination of controversies about public art in America, a charming little volume about the reburial of significant Americans, and several collections of essays of such astounding range that it seemed impossible that all of this marvelous prose and creativity could have come from one person.

Behind all of this astonishing productivity, and the astonishing pre-­Google filing system that supported it, stood an even more astonishing man—a brilliant and devoted teacher of generations of Cornell graduates and undergraduates, who traveled the country and the world. Michael’s curiosity, enthusiasm, and generosity were his distinguishing marks: friends and graduate students looked forward to his postcards (and later his e-­mails), to his travelogues of the places he went and the people he met, to the bulging envelopes that would arrive stuffed with clippings, photos, and bibliographic suggestions.

Michael Kammen wore his success lightly. He deservedly won dozens of honors and prizes (including the AHA’s Award for Scholarly Distinction), but he was the most ingenuous and unpretentious of men, driven by his own internal genius and curiosities rather than by the fleeting rewards of conventional academic ambition. And his devotion to his family trumped everything else. His love for Carol and their two sons, Daniel and Douglas, and for his daughters­in-law and grandchildren was complete. He leaves behind not only 30 or so books and hundreds of crystalline essays and reviews but a legacy of humanity, warmth, and humor that all who knew him seek to emulate.