Last summer in Paris I saw a new, very intelligent biopic about Hannah Arendt. I came to it without any particular expectations and certainly without any plan to convert my film-­going experience into a Perspectives column. But as I pondered the film afterward, I was struck by its relevance to the AHA’s membership, for it is about, at least in part, the gap that separates the disciplinary scholar from the public intellectual and the potential perils of crossing over.

The film has since been released in the United States to mixed, even polarized, reviews. That I found it riveting probably owes something to the symbolic power that Arendt has long exercised over me. When I worked in New York publishing in the late 1960s after graduating from college, I heard that Arendt was teaching at the New School for Social Research and wrote to her asking for permission to audit. Permission was granted, and after four years at Harvard­Radcliffe (as we called it then), during which I never saw a woman at a lectern, I was treated to the inspiring, consciousness-­raising spectacle of a Frau Professor held in great esteem by her students and even waited upon by a deferential male assistant. Since Arendt’s classes at the New School figure prominently in this film—we frequently see shots of the facade of the building on lower Fifth Avenue as well as of the steeply terraced lecture hall in which I once sat—it was probably inevitable that the film would speak to me. The film is also remarkable for the sheer amount of time it devotes to showing Arendt absorbed in thought, thus validating female cogitation as a recognized activity in our culture. But Arendt as feminist heroine is not my theme here. 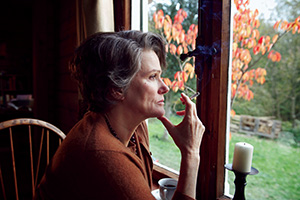 The film opens in 1961, when Arendt, played by the immensely talented German actress Barbara Sukowa, learns of the Israeli capture of the Nazi henchman Adolf Eichmann in Argentina and of his imminent trial in Jerusalem. For reasons that are not entirely clear, she decides that she should, in effect, turn public historian and cover the trial for the New Yorker magazine. We see her composing a letter on a manual typewriter to the magazine’s editor, William Shawn, setting forth her credentials: she is a Jewish refugee from Nazi Germany, and although she was briefly interned in a concentration camp in occupied France, she left the land of Hitler before seeing the Nazis in full command. The Eichmann trial, we infer, represents unfinished business for her, and her philosophical mind presumably equips her with the intellectual power necessary to interpret it. Over the strenuous objections of a staff member at the New Yorker, who points out that philosophers don’t meet deadlines, Shawn succumbs to Arendt’s blandishments and gives her the assignment.

The next scenes show her en route to Israel and reunited there with her beloved German friend Kurt whom she has not seen for decades, a fellow member of—ironically in the context of this story—her Zionist youth group. But the pleasure that comes from renewing old personal ties in the Jewish state is marred by her reactions to the trial, which she dutifully attends each day. She detests the theatricality of the prosecutors, with their talk of the six million martyrs who will not rest in their graves until justice is done to Eichmann, and she finds it unsettling that the defendant, who in her view embodies radical evil, is not demonic but is instead, as she puts it in English several times in this multilingual film, “a nobody.”

While not denying the fact of his deeds, Eichmann denies responsibility for them; he had, he says, sworn an oath to Hitler and was thus simply obliged to do as he was told. Footage from the black-­and­white newsreels of the trial, skillfully woven into von Trotta’s color film, shows Eichmann to be a small, unprepossessing man with a twitching, runny nose and large, dark-­framed glasses perched on a rat-­like face; we understand viscerally Arendt’s sense of the disturbing incongruity between the man himself and the enormity of his historical role. But even if we know what conclusions Arendt is about to draw, we are probably not prepared for the way the whole trial becomes for her an essentially philosophical conundrum. Its immediate and concrete context—the new Jewish state with its large population of emotionally raw Holocaust survivors—slips from her view.

Soon Arendt is back in her apartment on the Upper West Side of Manhattan, laden with cartons of trial transcripts, which she sorts and studies. Writing her New Yorker piece does not come easily (as Shawn’s colleague had predicted). Arendt’s mentality and work ethic could not be further from that of the journalist or the reporter on the beat. An ephemeral account of the events prepared in a timely fashion will not satisfy her. She needs, by disciplinary temperament, to wrest a pure nugget of truth from what she has just witnessed. Hence the shots of her engaged in thought. We see her napping in the afternoon, exhausted from her mental struggle with the intractable material. Eventually, but entirely on her own schedule and according to her own rhythms, Arendt produces the manuscript. Shawn pronounces it “brilliant” and decides that the New Yorker will publish it in five installments.

The articles are a succès de scandale. The New York intelligentsia promptly turns on Arendt; an envelope from “the nice old man downstairs” delivered by her doorman contains a piece of hate mail; her phone rings constantly with similar messages from anonymous members of the public; her old friend Kurt, now dying, turns his back on her. Sensing her increasing isolation, Arendt worries that she will be deported from the United States.

What has Arendt done to earn this obloquy? Two aspects of her account incense her readership. The first, summed up in her now-­famous phrase “the banality of evil,” is her depiction of Eichmann not as the titanic, hate-­filled monster that he was expected to be but as a bland cog in a machine. The second, even more explosive, is her assertion, based on evidence introduced in the trial, that leaders of the Jewish councils negotiated with the Nazis about who and how many would be sent for extermination. Arendt is thus regarded as blaming the Jews for abetting their own destruction. She is accused of anti-­Semitism, of being a self-­hating Jew.

The film offers Arendt the opportunity to vindicate herself, and she does so eloquently. In its tense climactic scene, she replies to her critics at an open meeting at the New School. Arendt now makes clear that the Eichmann trial has been for her the occasion to interrogate and historicize the category of evil. It has shown her that the greatest evil—­a new type of evil that is becoming common in the modern era—­is not based on selfish motives but is instead committed “by persons who refuse to be persons,” who renounce all intention, initiative, and even thought, the last characterized as “that silent dialogue between me and myself” and “the single most defining quality of human life.” Responding to a hostile question from the floor about her statements concerning the complicity of the Jewish councils, Arendt reveals why this inflammatory material—­which Shawn tried to get her to cut from the published articles—­attracted her so powerfully. It bolstered her central argument by illustrating the dangerous tendency of the abnegation of personhood to spread from the Nazis to others, including their Jewish victims. Arendt had thus conceived her account of the Eichmann trial as nothing less than a defense of thought, and she concludes with the hope that, in the future, “thinking will give people the strength to prevent catastrophes when the chips are down.”

The position that Arendt articulates in this scene is profound and compelling; few filmgoers will doubt its value and importance. But still, the film suggests, attempting to give voice to it in a series of magazine articles was, on Arendt’s part, a colossal rhetorical failure and maybe a moral failure as well. She has ignored her audience and its personal stake in her subject matter. When, still in Israel, she begins to spin out her ideas about Eichmann as “a nobody,” too inchoate even to be an anti­Semite, the film shows us, through their body language, how disturbing Kurt and his family find this analysis; it also shows Arendt oblivious to their discomfort. When, in a different register, Shawn suggests that she omit some ancient Greek phrases from her article, Arendt retorts that his readers should learn Greek. Arendt’s close colleague Hans Jonas, whose friendship she loses as a result of her foray into public history, puts the charge concisely: “You turn a trial into a philosophy lesson.” Or, as he warns her earlier in the film, “You can’t write like this for theNew Yorker. It’s too abstract.”

For us the lesson is that the vocation of historian (or philosopher) is not identical to that of public historian. Subtle and complex issues that can be properly addressed in academic writing, which unfolds in slow time, may be blunted and deformed in other media. We historians want and need both academic and public audiences. But, this brooding film implies, the two cannot always be safely collapsed into one.

—Jan Goldstein is president of the AHA.