What happens in Washington can often feel remote, and when an agency’s local impact isn’t clear, it’s easy for opponents to paint that agency as out of touch, a pet project of the elites, or frivolous. Opponents of the National Endowment for the Humanities (NEH) have used this strategy effectively, and there is a risk that their vision of the NEH might eclipse all the important educational and cultural work that it does, every day, in communities across the nation.

Wielding their caricature, opponents of the NEH have long sought to eliminate the endowment. The House Budget Committee, for example, last year wrote, “Federal subsidies for the National Endowment for the Arts, the National Endowment for the Humanities, and the Corporation for Public Broadcasting can no longer be justified,” in part because “they are generally enjoyed by people of higher­income levels, making them a wealth transfer from poorer to wealthier citizens.”

While the NEH’s opponents have not succeeded in eliminating its funding (or that of the NEA and the Corporation for Public Broadcasting), they have severely limited its budget and eroded its capacity over many years. In fact, funding for the National Endowment for the Humanities is now at its lowest level in constant dollars since 1971 (see accompanying chart). 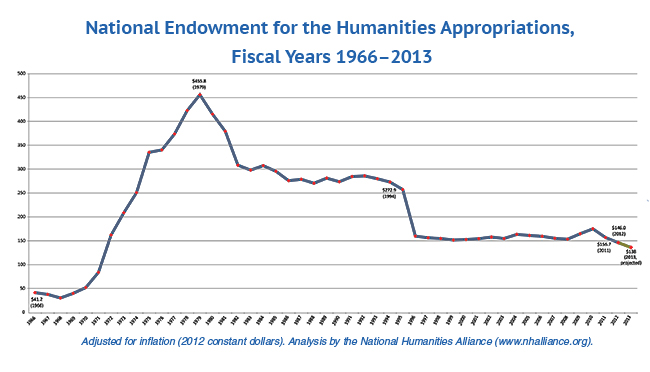 The most recent assault on the NEH has come at a time when the overall environment for the humanities is particularly challenging, due to the perceived lack of employment options for humanities majors and the resulting efforts to guide students and resources away from humanities departments at state universities. We’ve already seen these proposals applauded in Wisconsin, Florida, Texas, and North Carolina. As members of Congress and their staffs contemplate future funding levels for NEH, these challenges and their portrayal in the news media reinforce the sense among many of them that humanities funding is unnecessary, frivolous, and an indulgence of the wealthy. The wide circulation of this narrow conception of the value of the humanities makes elected officials less likely to support funding for NEH.

In order to begin to rebuild NEH’s funding, we have to deal with this broader context. Fortunately, there is already considerable energy behind this effort as a result of the Commission for the Humanities and Social Sciences’ report, The Heart of the Matter. Commissioned by a bipartisan group of representatives and senators, it calls for renewed attention to the critical role that the humanities play in fostering “a more vibrant nation.”

But the report’s most important contribution might be its call for humanities organizations—universities, museums, state humanities councils, libraries, K–12 schools—to “embrace a new commitment to collaboration and a new sense of mutual obligation” in thinking creatively about how they can contribute to their communities. This call to action is important because the best way for humanists to foster “a more vibrant nation” is not by talking about the humanities in broad terms, but by doing their work in specific places. Close to home, humanists can increase the impact of the humanities by forging innovative collaborations between higher education institutions and K–12 schools, for example. In this way, they can foster critical skills and knowledge that can increase opportunity for those who are not currently being adequately served.

This direction makes good sense from an advocacy perspective, as it allows us to demonstrate the value of the humanities as opposed to asserting their value in more abstract terms. While we need to make arguments on a national level about what the humanities have to offer, the most effective advocacy for federal funding will also demonstrate impact in particular places. Elected officials are, after all, elected to serve communities, and they have little incentive to support programs that do not have a tangible impact on their districts. Together, humanities organizations can demonstrate and increase this impact.

To this end, the National Humanities Alliance, in partnership with the Federation of State Humanities Councils, has launched Humanities Working Groups for Community Impact, an initiative that aims to bring together humanities organizations and elected officials in 50 congressional districts to increase the visibility of high-­quality programs, inspire collaboration and innovation, enlist the help of elected officials, and foster a shared focus on serving their local communities.

This initiative is outward-­looking, providing an escape from inward­focused debates about the health of the humanities. While it is essential that our humanities infrastructure is vital, too great a focus on the means, as opposed to the ends, makes the humanities appear as a special interest with a set of needs as opposed to an active and essential contributor to the welfare of individuals and communities. With a focus on relevance and impact, our arguments for increased resources will be in support of goals about which many outside the humanities already care. This increases our chances of persuading elected officials and the public that the humanities are worthy of support.

Many individuals and organizations are already doing the work we wish to promote. For example, state humanities councils work with many college and university professors with great results, and numerous higher education institutions are involved in their local schools. Those who are already participating in work that is place­based and community-focused can seek out organizations that may be able to increase the reach and impact of their work.

Those who are not currently working in their local communities can start now. They can begin looking for ways to make their work relevant to the needs and interests of those in their community. And all can become advocates by involving elected officials in their projects. By doing so, they will make it harder for opponents of funding to caricature the humanities, and they will make it more likely that elected officials will support funding for humanities research, preservation, teaching, and programming the next time they have the chance.