How Long to the PhD?

One of the recurring questions we hear from doctoral programs and doctoral students is, "Just how long does it really take to get a PhD?" The answer, it appears, is around eight years.

As we noted in the January 2006 issue of Perspectives ("A Statistical Snapshot of History PhDs: 2004"), published information from the federal Survey of Earned Doctorates offers two rather unusual measures of the time spent earning the degree—the time since the baccalaureate degree, and the years spent registered for courses after the baccalaureate degree. For history, the former has hovered around 11 years, while the latter was a bit over 9 years.

Of course, for many directors of graduate studies and doctoral students, this particular measure is of little use for assessing how much time someone should (or will) spend in a doctoral degree program. So the AHA staff asked the National Opinion Research Center, which administers and tabulates the survey, to look at some of its unpublished data for a more precise figure.

As expected, the actual time spent in specific doctoral programs is much lower than the published figures. Among new history PhD recipients in 2004, the median amount of time spent in a particular program was 8 years. This included 3.5 years on coursework and exam preparation, and 4 years on the dissertation.

There was surprisingly little variation between the various geographic subfields on these questions. New European history PhDs reported the least time spent in coursework—with a median of just three years among those who received the PhD since 2001 (Figure 1). This compares to four years or more among students who received PhDs in African and Latin American history in 2004. It should be noted, however, that we have only one year of data on those fields, which could cause some skewing. 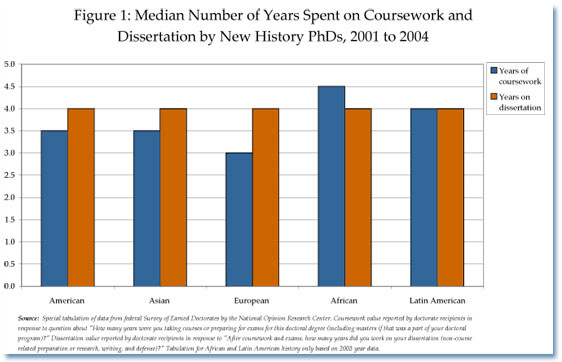 It is a bit surprising to find that the median time spent on the dissertation is identical in each of the geographic field specializations at four years. Given the variations in language requirements and travel to distant archives, we would have expected some variation between the fields, but the median has been steady in each field over the past four years.

The only points of variation occurred in the more specific field of the history of science, which had a median of 3.5 years spent on the dissertation, and the "general history" category, which popped up to a median of 5 years in 2004, when a number of African and Latin American historians migrated into their own categories.

The data from the federal survey does not indicate whether the students already earned credits toward the degree in an earlier program, and whether the coursework was taken on a full- or part-time basis. Nevertheless, the data provides a better measure of the actual time spent by students in history doctoral programs before they receive the PhD degree.

—Robert Townsend is AHA’s assistant director for research and publications.