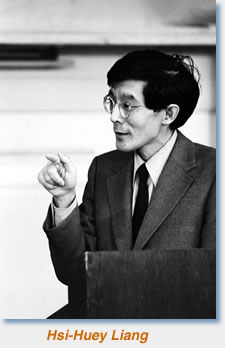 The son of the Chinese diplomat, Lone Liang, Hsi-Huey Liang was born in Germany on April 18, 1929, and spent his early years in Berlin, Prague, and Bucharest, where he attended French and German schools. During World War II, when his family returned to China, he attended high school in Chungking where he experienced the Sino-Japanese struggle first hand. Afterward, he returned to Europe, completing his secondary studies in Switzerland and Great Britain and receiving his BA degree from Cambridge University.

Liang's next adventure began in 1951 when he came to America to study at Yale University with Hajo Holborn. His doctoral dissertation was a study of Berlin workers during the second empire. Liang's empathy with these Berliners, their language and humor as well as the details of their daily lives, shone through his massive text.

Liang's next research project, The Berlin Police in the Weimar Republic (1970), scrutinized how a key part of Prussian officialdom faced the political and social unrest of the 1920s. Moving on to diplomatic and international history, Liang, using the papers of General Alexander von Falkenhausen, wrote The Sino-German Connection (1978), which linked the history of his two homelands during the interwar period. He then embarked on his magnum opus, The Rise of Modern Police and the European State System (1992), another huge study of international policing and politics based on archival sources in Austria, France, Germany, Switzerland, and Russia.

Keen to share his personal historical insights, Liang published the memoir, Berlin Before the Wall: A Foreign Student's Diary with Sketches (1990). His last book, Encounters in Berlin and Prague: An Academic Autobiography, which merged his life story with the history of central Europe, will be published in Prague in 2005. In honor of his four grandchildren, Liang also wrote two children's histories, one on modern Europe, the other on modern China, which incorporated his own experiences. Some of his 600 drawings and illustrated histories will be on exhibition at Vassar College in the fall of 2005.

Hsi-Huey Liang was a brilliant teacher. His lectures, beautifully crafted, carried his listeners on a mesmerizing journey of action and reflection. As an advisor, he provided rigorous training in research, writing, and historical analysis. At Bard College, he created a broad, demanding program in modern European political and diplomatic history, giving special attention to German and Czech history. At Vassar he added Russian history to his teaching repertoire. An avid traveler, Liang led Vassar student trips to Russia in 1988 and to Berlin and Prague in 1990.

Hsi-Huey Liang will be deeply missed by his colleagues and by all the students he inspired with his probing questions, vivid anecdotes, stirring insights, and modest demeanor. Here was the complete historian, who sought the handprints of ordinary people in the past, understood the power of human connection, and recognized the permeability of international frontiers.