The Age of Planetary Revolution

Remembering the Future in Science Fiction

The year is 2350. The solar system maintains a fragile political balance, with Earth’s Martian colony now an independent republic locked in an armed standoff with its former overlord. The scattered mining settlements of the asteroid belt are still struggling under the thumbs of both inner planets. This is the starting point for The Expanse (2011–22), a series of novels (and now a TV show) by Daniel Abraham and Ty Franck, writing together as James S. A. Corey. It is also part of a long-standing science fiction tradition in which writers have set stories in a common framework of future solar system history. 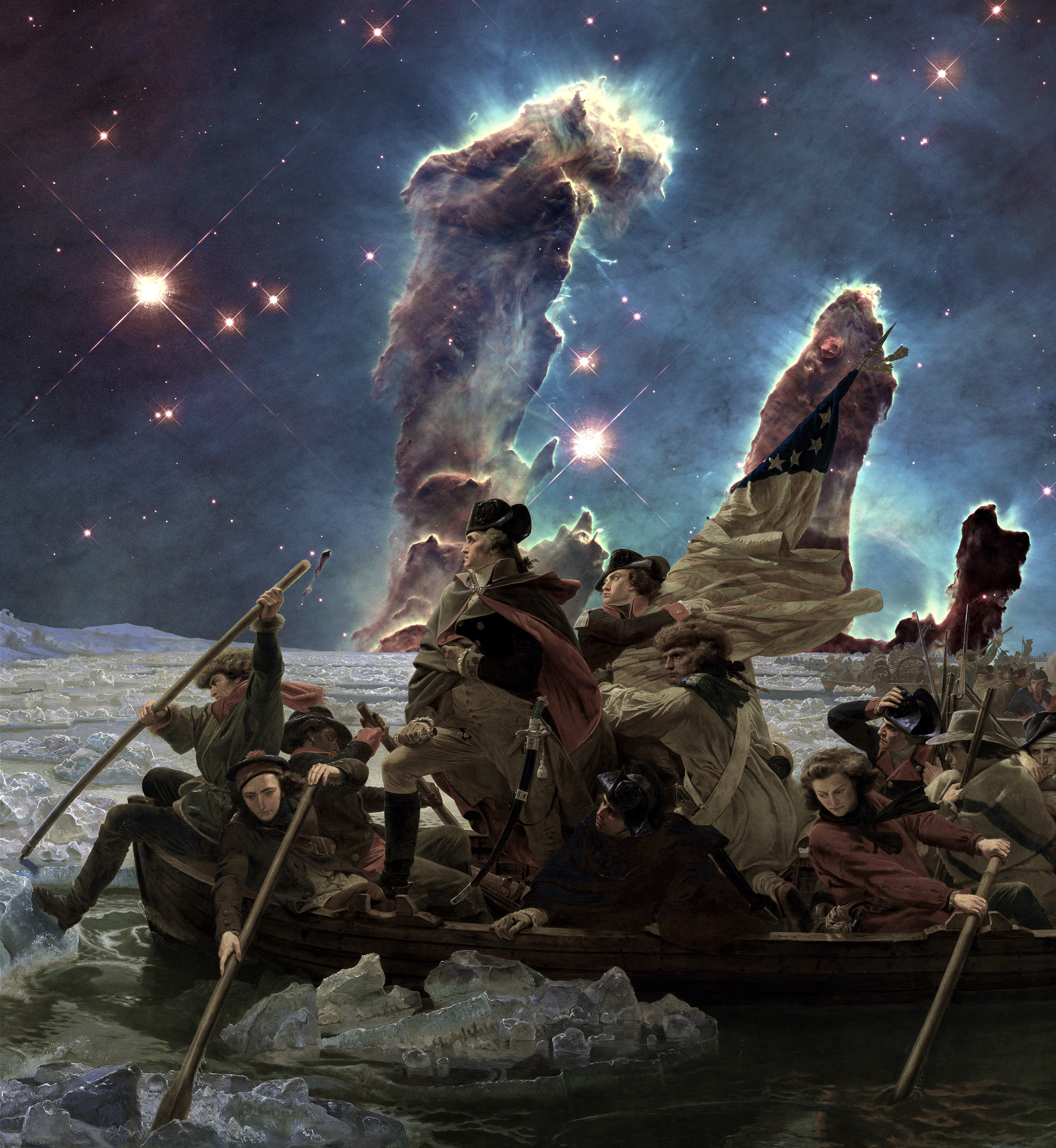 That shared future begins with an age of exploration. The first decades of perilous voyages from Earth open the way for settler colonies on the moon, Mars, Venus, large asteroids, and moons of the outer planets. Cultural divergence and economic tensions follow, and then there are successful rebellions against imperial Earth that define a distinct period of interplanetary politics.

These science fiction futures depend on the ways that their creators understand the past. As British writer Ken MacLeod put it, “History is the trade secret of science fiction, and theories of history are its invisible engine.” Writers often draw on specific historical events and interpretations and write them forward. Isaac Asimov reimagined the decline of the Roman Empire, Ada Palmer structured four novels around the political ideas of the Enlightenment, and AnnaLinden Weller (writing as Arkady Martine) reinscribed the Byzantine frontier on galactic imperialism. The national independence movements that first swept the Americas, then parts of Europe, and then the European empires in Asia and Africa provide one of the most popular of such templates. When I was studying for PhD exams in the late 1960s, a go-to reference was R. R. Palmer’s The Age of the Democratic Revolution: A Political History of Europe and America, 1760–1800 (1959, 1964). Looking at the world of science fiction, a historian of the future might be similarly inspired to write The Age of the Planetary Revolution: A Political History of the Solar System, 2075–2350.

Writers often draw on specific historical events and interpretations and write them forward.

This Age of Planetary Revolution is a consensus future drawn from history, one that writers of science fiction have used and modified in dialogue with their predecessors. Some delve deeply into the independence movements themselves. Others assume that their well-read readers, familiar with this shared future, will nod knowingly at passing references to an earlier planetary independence movement. The Age of Planetary Revolution has been a usable future history for writers whose politics range from hard conservative to confirmed socialist. It is a story that reaches a rough end point when the independence struggles have succeeded and the mother planet and former colonies enter a new period of solar-system-wide diplomacy and war. This future has its own history.

Writing in the technology-oriented “golden age” of American science fiction in the 1940s, 1950s, and early 1960s, Robert Heinlein espoused a sort of “don’t tread on me” patriotism that resonated with Cold War Americanism as well as his personal libertarian bent. In his novel The Moon Is a Harsh Mistress (1966), the former penal colony on the moon is in its third generation. Three million Loonies are fed up with the heavy-handed Lunar Authority and the onerous terms it imposes on trade with the Federated Nations of Earth. They want to throw off the colonial yoke, protesting, organizing, and declaring independence . . . on July 4, 2076. They win their revolution by bombarding Earth with carefully targeted rocks, and Luna Free State can shape its own future.

Heinlein explicitly used the American Revolution as the default model for planetary rebellions not only in The Moon Is a Harsh Mistress but also in Between Planets (1951), a young adult novel that features a teenage hero who is stranded on Venus when that planet rebels against Earth. Here, Heinlein even interrupts the action to allow a Venusian officer to lecture young Don Harvey about the rebel strategy that followed from interpretations of history common among Heinlein’s contemporaries. The 13 American colonies won independence because Britain was busy with European rivals, the officer says, not because the colonists had enough military capacity on their own. In the same way, Venus will rely on internal conflicts to undermine Earth’s willingness to fight for a distant poverty-stricken colony. Meanwhile, Earth forces may seize the few Venusian cities—the equivalents of Philadelphia and New York—but never the countryside, and Venusians can wait them out.

The next generation of authors, like Greg Bear, Pamela Sargent, and Kim Stanley Robinson, had their interpretations of the Age of Planetary Revolution shaped by the Cold and Vietnam Wars, the social and political activism of the 1960s and 1970s, and the new frustrations of postcolonial democracy. Heinlein’s books were science fiction thrillers in which readers expect the future American good guys to win. In contrast, these younger writers imagined planetary independence struggles as more nuanced and complex. Revolutions can fail. Those that succeed require patient politics to forge a stable new nation.

Bear wrote Moving Mars (1993) “to go against some of the conclusions in The Moon Is a Harsh Mistress.” To do so, he expands the temporal bounds of Heinlein’s history. Trouble builds when Earth tries to reassert control over semiautonomous Martian settlers, echoing British efforts to tax and control its colonies after 1763. The core of the novel is the internal politics of an independence movement led by a young woman with a passion for government, as opposed to Heinlein’s focus on Europe. Growing economic pressure from Earth and failed compromises lead to a declaration of independence and a constitutional convention in which the youthful protagonist helps to craft a Federal Republic of Mars.

Political life is also at the heart of Kim Stanley Robinson’s sweeping trilogy about settling and terraforming Mars, this time supplemented by postcolonial realities. Red Mars (1992) pivots on political revolutions not against governments but against multiplanetary corporations backed by the military power of Earth. Robinson uses two structuring narratives from 19th- and 20th-century history to talk about the failures of utopias both capitalist and socialist. This history of the future is messier than Bear’s or Heinlein’s, more aware that history is not a story of progress. A first Martian revolution is briefly successful in 2061 but then collapses before more powerful Earth forces. A second attempt succeeds in 2127 when Earth is distracted by climate catastrophe. In Green Mars (1994) and Blue Mars (1996), the heroes are the state makers and architects of a viable government who try to learn from the past. A constitutional convention sets the tone for Blue Mars and functions as the intellectual climax of the trilogy, bringing issues of political economy together with environmental and scientific choices raised by the physical transformation of the planet. The debates, where women play key roles as dealmakers, allow Robinson to highlight the merits of democratic political interchange over feats of derring-do, just as historians had moved from a focus on military to political history.

Around the same time, Pamela Sargent addressed a similar struggle with less optimism. There is no successful constitutional convention in her multigenerational story of the future of Venus. The idealistic colonists who are working to terraform the planet in Venus of Dreams (1986) and Venus of Shadows (1988) discover that autonomy from Earth is impossible. An effort to force independence through a Heinlein-style coup fails because the Venus colonists are divided and deeply dependent on supplies and technology from Earth. They achieve concessions but remain colonials.

The idea that the Age of Planetary Revolution will lead to a tense new era of interplanetary rivalry is now a logical extension of the consensus future.

The television series Babylon 5 (1993–98) likewise complicates the independence narrative with moral ambiguity. A subplot involves a Martian rebellion against a repressive Earth in the 2260s, but the rebels are not Heinlein’s clean-cut founding fathers. They’re morally compromised people who use desperate tactics in a dirty war, clear effects of the Vietnam era on the writers’ understanding of warfare, resistance, and rebellion.

And so we arrive back at The Expanse. This future explicitly spans the transition from the era of independence movements to the following era of solar system diplomacy. Mars has successfully rebelled against Earth, but Belters are still fighting for independence (and among themselves); the Mars–Earth standoff dominates interplanetary politics. The clean-cut American Revolution has given way to a new era of great power politics, with Earth and Mars locked in their own cold war and scheming for influence in the “third world” of the Belt. And with this third world comes terrorism. Echoing Heinlein but with the lens of Sargent and others, rogue Belters ram asteroids into Earth with vastly more devastating effects than the surgical strikes in The Moon Is a Harsh Mistress.

As The Expanse suggests, the idea that the Age of Planetary Revolution will lead to a tense new era of interplanetary rivalry is now a logical extension of the consensus future. Perhaps it will be analyzed by a future version of A. J. P. Taylor’s The Struggle for Mastery in Europe. The Struggle for Mastery in the Solar System will be assigned reading, and patterns from our past will continue to recur in the history of the future.