In 1968, approximately two hundred students at Bucks County Community College (BCCC) in Pennsylvania, most of whom were probably straight, gathered in the college’s main courtyard. They were there to protest the college president’s decision to cancel a student-organized and student-funded lecture by a leading gay rights activist from New York. This was one of the largest demonstrations in support of LGBTQ+ rights before the 1969 Stonewall rebellion in New York City and one of only two known pre-Stonewall LGBTQ+ protests on a college campus. In 2021, the same year that the 1968 protest was rediscovered, BCCC appointed its first African American, second female, and first gay president. These are among the many historically significant stories featured in a new traveling exhibit sponsored by the Pennsylvania LGBT History Network. 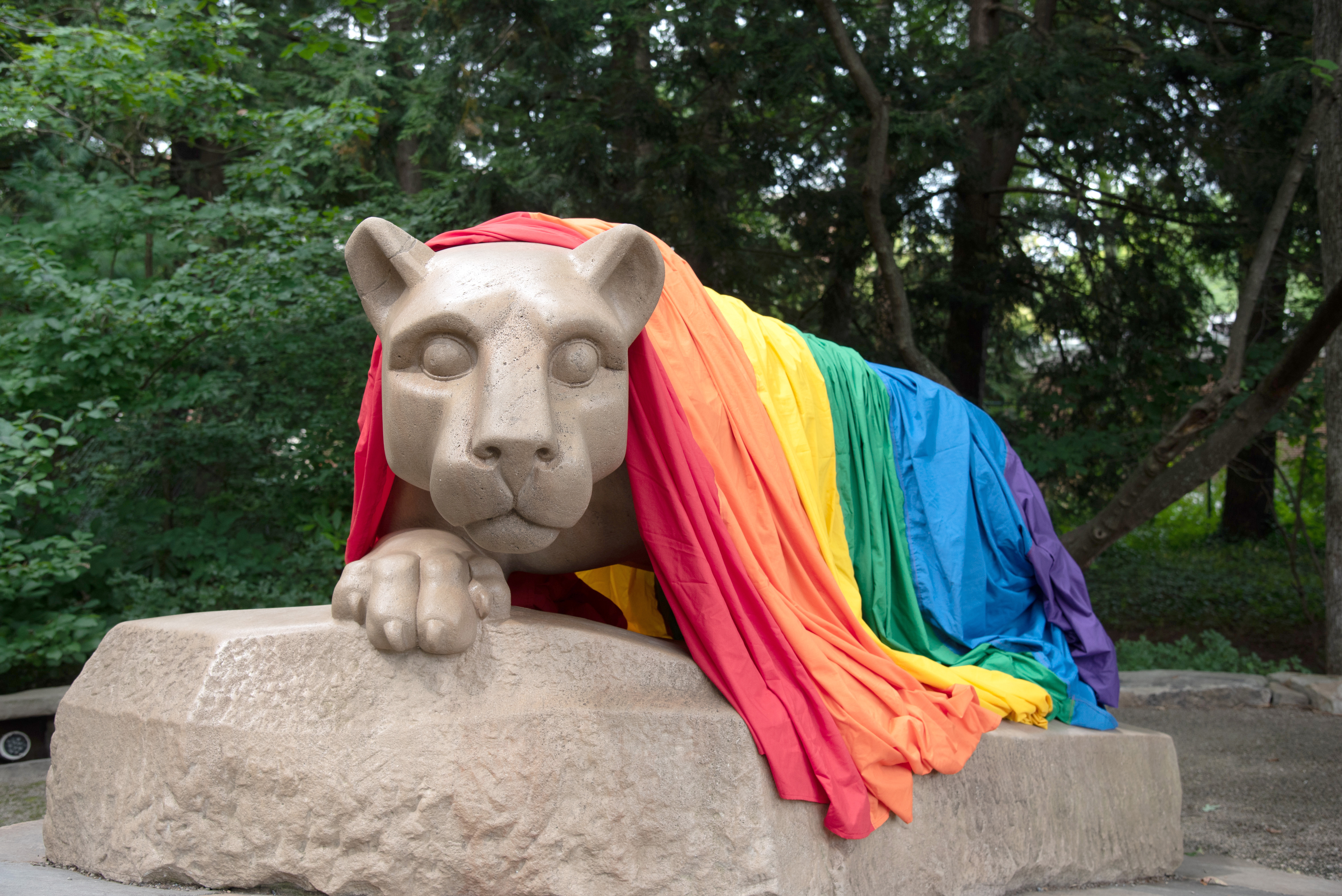 In January 2023, Out on Campus: A History of LGBTQ+ Activism at Pennsylvania Colleges and Universities will be on display at the William Way LGBT Community Center in Philadelphia. Produced by an 11-person collaborative research team, the exhibit will be just a short walk from the AHA annual meeting headquarters. Out on Campus provides excellent opportunities for learning about LGBTQ+ history, thinking about public history partnerships, and reflecting on higher education’s roles and responsibilities in social justice struggles.

In the last several decades, LGBTQ+ historians have launched a large number of projects on the queer histories of colleges and universities. In the 1970s and 1980s, women’s historians such as Leila J. Rupp, Nancy Sahli, Carroll Smith-Rosenberg, and Martha Vicinus published work on the history of same-sex intimacies at women’s colleges; this was followed by case studies of Stanford University by Gerard Koskovich, Cornell University by Genny Beemyn, Columbia University by David Eisenbach, and the University of Kansas by Beth Bailey. Building on these works, more recent scholarship, including regional studies by Jess Clawson (Florida), Patrick Dilley (Midwest), and David Reichard (California), has concentrated on repressive and liberatory policies and practices, support for and opposition to student and faculty organizing, and oppressive and emancipatory knowledge production.

Out on Campus is the third major traveling exhibit produced by the Pennsylvania LGBT History Network. The network was founded in 2016 by Barry Loveland, who worked for three decades as the Pennsylvania Historical and Museum Commission’s chief of architecture and historic preservation. The network also has submitted nominations to the commission for state historical markers and encouraged nominations to the National Park Service for listings on the National Register of Historic Places; conducted an LGBTQ+ history workshop for educators; and created Pennsylvania’s first annual statewide LGBTQ+ History Prize for National History Day in 2022.

One noteworthy aspect is the exhibit’s production by a diverse and interdisciplinary team.

The network’s first exhibit, The Long Road to LGBTQ+ Equality in Pennsylvania, commemorated the 50th anniversary of New York City’s Stonewall riots in 2019. The second, With Open Heart and Open Arms: LGBTQ+ Cuban Refugees and the LGBTQ+ Community’s Response to the Mariel Boatlift of 1980, was curated by John Anderies, archivist of the John J. Wilcox, Jr. Archives at the William Way LGBT Community Center. These exhibits have been displayed at more than 60 locations and are available digitally. Out on Campus premiered at the Historic Harrisburg Resource Center in August and is scheduled for visits to nine Pennsylvania college and university campuses, along with the William Way LGBT Community Center.

One noteworthy aspect is the exhibit’s production by a diverse and interdisciplinary research team that included faculty, librarians, administrators, staff, students, alumni, and public historians affiliated with eight institutions and organizations. (I served as a historical consultant, wrote the introduction, and produced the text for BCCC, which was based on my 2021 essay for the OutHistory website.) Another accomplishment is the diversity of institutions included in the exhibit, which features colleges and universities that were and are urban, suburban, and rural; public and private; religious and secular; single sex and coeducational; and historically Black and predominantly white. It covers the western, central, and eastern parts of the state and encompasses two-year community colleges, four-year undergraduate institutions, and universities that offered undergraduate, graduate, and professional degrees.

My introduction sets the stage by arguing that “Pennsylvania was at the forefront of LGBTQ+ activism in the 1960s—home to the most widely circulating homophile movement magazine (Drum), site of multiple LGBTQ+ rights demonstrations at Independence Hall and Dewey’s restaurant, and generator of influential groups such as the Janus Society, Homosexual Law Reform Society, and Homophile Action League.” This leadership tradition continued in the 1970s, “when the state contributed greatly to the rise of gay liberation, lesbian feminism, bisexual activism, and transgender organizing.” In 1975, Pennsylvania governor Milton Shapp issued a groundbreaking executive order that committed his administration “to work towards ending discrimination against persons solely because of their affectional or sexual preference.” Shapp also banned discrimination based on sexual orientation in state employment, which applied to 14 public universities in the Pennsylvania State System of Higher Education (PASSHE); Pennsylvania was the first state to take this step. In another first, Shapp established the Pennsylvania Council for Sexual Minorities in 1976. Two years later, the council extended the ban on discrimination based on sexual orientation to include PASSHE students, the first state university system in the nation to do so. Across the 1970s, students and faculty at multiple state colleges and universities fought to have newly established LGBTQ+ campus organizations recognized and funded by their institutions. They also fought to improve the handling of LGBTQ+ topics in classes and programs; support LGBTQ+ studies research and teaching; and reduce anti-LGBTQ+ abuse, harassment, and violence.

After two introductory panels, the exhibit explores one women’s college (Bryn Mawr) and two historically Black universities (Lincoln and Cheyney). The Bryn Mawr panel discusses the college’s controversial late 19th- and early 20th-century president M. Carey Thomas before turning to the formation of the Gay People’s Alliance in 1975. The panel on Lincoln and Cheyney introduces early 20th-century students Langston Hughes and Bayard Rustin before focusing on the rise of LGBTQ+ activism on these campuses in the early 21st century. The next two panels, covering Lafayette College (hyperbolically labeled the most homophobic campus in America by the Princeton Review in the 1990s) and BCCC, begin with repressive developments in the 1960s but conclude with more hopeful stories. The Lafayette panel highlights the experiences of a closeted African American gay student, while the BCCC one focuses on the 1968 protest. The Lafayette student later became the first openly gay member of the college’s board of trustees; BCCC’s new president and her wife joined the campus community in 2021.

The seventh and eighth panels focus on the University of Pennsylvania and Pennsylvania State University, where LGBTQ+ student and faculty organizing began in 1970 and 1971. Penn State initially declined to recognize Homophiles of Penn State but relented after students filed a lawsuit. The University of Pennsylvania, where Japanese American gay liberationist Kiyoshi Kuromiya was an early gay student leader, later established one of the earliest and best-funded LGBTQ+ college or university centers, which was recently named for its longtime director Robert Schoenberg. The University of Pittsburgh and Lehigh University, where LGBTQ+ student and faculty organizing began in 1972, are highlighted in the next two panels. The exhibit concludes with panels on Shippensburg University, where LGBTQ+ organizing began in 1974, and Harrisburg Area Community College, whose students elected (as far as current research has been able to determine) the country’s first out trans student body president in 2002.

The exhibit is careful to emphasize the ongoing nature of LGBTQ+ struggles.

In some respects, Out on Campus presents a conventional progress narrative, emphasizing the repressive dimensions of Pennsylvania colleges and universities in the more distant past and the successes of LGBTQ+ activism in more recent decades. The exhibit, however, is careful to convey the ongoing nature of LGBTQ+ struggles. As the exhibit introduction explains, “Today, Pennsylvania’s colleges and universities have much more to do to strengthen their commitments to education, equity, and empowerment for LGBTQ+ students. There would be no better way to do this than to support initiatives like this one that explore, examine, and excavate the history of LGBTQ+ struggles in higher education.”

Out on Campus implicitly asks all of us who are affiliated with colleges and universities to reflect more deeply on the roles our institutions have played in supporting and undermining the growth and development of our LGBTQ+ students, faculty, administrators, and staff. This is especially important at a moment when many states and many educational institutions are adopting anti-LGBTQ+ policies and supporting gender and sexual censorship. In recent years, some postsecondary institutions have engaged in important work that has explored and exposed their historical relationships to African American slavery, Native American genocide, and unethical scientific research on people of color, poor people, incarcerated people, and people with disabilities. As this work continues, colleges and universities should consider sponsoring and supporting research and reconciliation projects on higher education’s queer and antiqueer histories. Out on Campus provides a useful model for those that are interested in doing so.

AHA annual meeting attendees can learn more and visit the exhibit at a session titled “Out on Campus: A History of LGBTQ+ Activism at Pennsylvania Colleges and Universities” on Friday, January 6, 2023, from 3:30 to 5:00 p.m. at the William Way LGBT Community Center (1315 Spruce Street). The exhibit will also be available for viewing at the center on Friday and Saturday, January 5 to 6, from 12:00 to 5:00 p.m.

Marc Stein is the Jamie and Phyllis Pasker Professor of History at San Francisco State University.