Opposition to Militarization in Nevada

Since the onset of World War II, the US Armed Forces found a home in the Desert Southwest. With vast expanses of lightly populated, barely vegetated land—much of it already overseen by the federal government—states including New Mexico, Nevada, Arizona, and Utah became hosts between 1940 and 1970 to some of the largest and most important military installations in the Department of Defense’s (DOD) “base structure.” 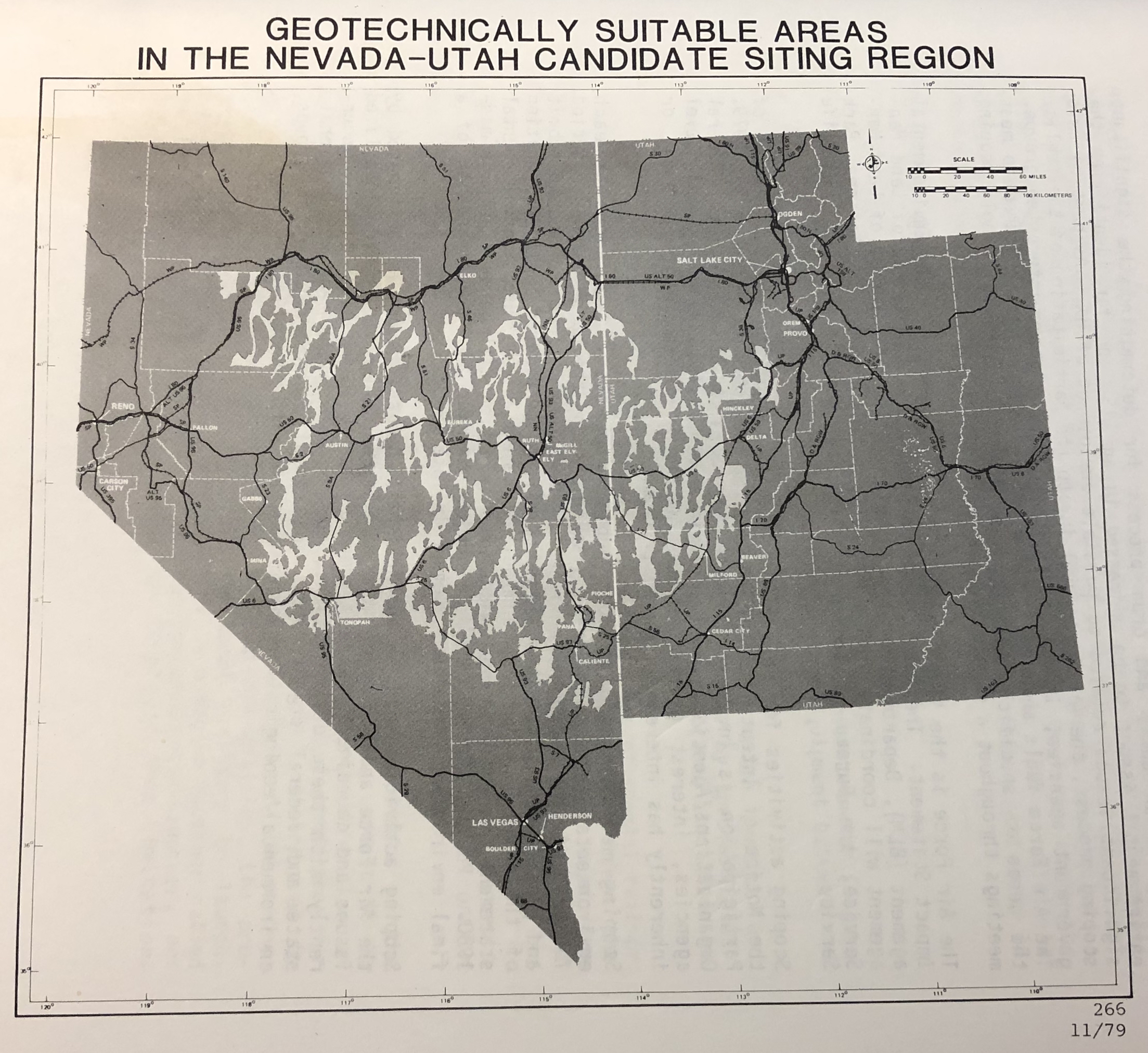 The Air Force and Interior Department determined that desert valleys in Nevada and Utah were the best place to store America’s nuclearized arsenal of MX missiles, as shown in this 1979 map from the agencies’ joint report to the Environmental Protection Agency, “The MX System and the Environment.” Courtesy University of Nevada, Reno, Special Collections.

In the mid-20th century, Nevada in particular came to rely upon defense dollars to generate profits from what many Americans considered wastelands. Powerful politicians, including Democratic senators Pat McCarran (1933–54) and Howard Cannon (1959–83), ensured a warm welcome for militarization in the state. Nevada is now home to Nellis Air Force Base, Hawthorne Army Depot, Fallon Naval Air Station, and the former Nevada Test Site, where nearly 1,000 nuclear weapons were detonated between 1951 and 1992.

By the 1970s, however, many Nevadans had had enough of the bombs in their backyard. With the postwar transformation of Las Vegas into a multicultural metropolis, the state’s electorate had become more progressive. But more significantly, DOD plans for the state were growing more audacious as Cold War tensions rose anew, and Nevadans—newcomers and old-timers alike—felt the federal government was abusing their trust.

In 1979, controversy ensued when President Jimmy Carter proposed a bill that would locate America’s nuclear arsenal, a collection of 200 intercontinental ballistic missiles, on a massive complex straddling the Nevada–Utah border, a project officially named the “Missile Experimental Basing Program,” but known to many simply as “the MX.” The conservative Cannon, who was initially pro-MX, championed the project for its “infusion of jobs and capital spending.” One letter to the editor of a local newspaper agreed with the senator, arguing that hosting the MX was a “small price to pay for democracy.”

The scheme would require fencing off 25,000 square miles of land from public use—an area five times the size of Connecticut.

But many Nevadans balked at the plan’s sheer size. One economist estimated the scheme would require fencing off 25,000 square miles of land from public (and bovine) use—an area five times the size of Connecticut. In addition to its footprint, it would have been one of the largest construction projects in human history, consuming as much as 100 billion gallons of water over its lifespan, “enough to supply Las Vegas for almost six years.”

Most importantly for nearby residents, the MX would have made the region into a “bullseye for attack,” as one newspaper put it. Strategically located in the remote desert to absorb an initial strike by the Soviet Union, Cold War defense theorists called it America’s “nuclear sponge.”

For these reasons, in addition to the urban environmentalists and pacifists one might expect, MX opposition first emerged out of two perhaps surprising strands of grassroots activism: Native American treaty rights movements and the Sagebrush Rebellion, a loose collective of states’ rights ranchers. What united them in this “unlikely alliance,” as one scholar has described it, was a concern for the future of the land they loved.

Native Numu (Northern Paiute), Newe (Western Shoshone), and Nuwuvi (Southern Paiute) people who live in the Great Basin and Mojave Desert, many of them ranchers like their settler neighbors, have objected to any law that would restrict their rights to return to traditional territories to hunt, gather, and perform ceremonies. These rights were enshrined in treaties signed by their ancestors between 1855 and 1868. When antinuclear demonstrations erupted at the gates of the Nevada Test Site in the spring of 1985, the Western Shoshone National Council wrote passports granting permission for non-Native visitors to trespass on land ostensibly belonging to the US federal government. Shoshones claimed the same land under the 1863 Treaty of Ruby Valley, arguing it was the American military that was trespassing on Newe Segobia, the Newe homeland.

American Indian activists were instrumental in defeating the MX too. Many already had been mobilizing in a similar vein against the Bureau of Land Management (BLM), which oversees roughly two-thirds of Nevada. BLM officials had been aggressively prosecuting two Shoshone ranchers and sisters, Mary and Carrie Dann, who refused to pay grazing fees, claiming “aboriginal title” to the range. Their supporters were eager to join the anti-MX scene just as the Danns’ case was making its way to the US Supreme Court. These activists saw the two battles as connected through treaty land rights. In October 1979, Dann supporters at the Western Shoshone Sacred Lands Association (WSSLA) filed a lawsuit against the United States for violating the Ruby Valley Treaty in its MX proposal. “This is the only portion of earth that we belong to,” said WSSLA representative Glenn Wasson in the Las Vegas Review-Journal.

Some of the MX’s staunchest critics were also some of Reagan’s biggest supporters: white, rural, working-class westerners.

Carter’s successor, Ronald Reagan, ultimately axed the MX in October 1981, and the project was never built. Despite the new president’s storied support for defense spending, some of the MX’s staunchest critics were also some of Reagan’s biggest supporters: white, rural, working-class westerners who had come to see such proposals, even for the sake of national defense, as land grabs. “We don’t like the BLM controls,” wrote one couple from Pioche, Nevada, to Governor Robert List. “Now to top it all off we are told the missile range is going to take the rest” of the area’s “good farm and ranch lands from production and off from our tax rolls.”

Rural MX opponents found their biggest mouthpiece in Reagan’s “first friend,” Republican senator Paul Laxalt (1974–87). The two had cultivated a close relationship with each other as western governors in the late 1960s. “Count me in as a [Sagebrush] Rebel,” Reagan declared on the campaign trail. When he got into office, he followed through. His October announcement came just two weeks after a reportedly bitter meeting with Laxalt and Utah senator Jake Garn.

Although Reagan brought an end to the MX controversy, Nevada’s uniquely intimate relationship with the military has continued into the 21st century. Indeed, Reagan supported the militarization of the Great Basin in other ways throughout his time in office. When the Cold War ended, much of the existing base structure remained. In 2010, the test site rebranded as the Nevada National Security Site. In 2017, the Air Force proposed an expansion to the Nevada Test and Training Range near Nellis, which would have closed off part of the neighboring Desert National Wildlife Refuge. And the construction of Yucca Mountain Nuclear Waste Repository, first proposed in a bill in Congress in 1982, remains a legislative possibility in 2022.

Since the MX episode, the relationship between Nevadans and the federal government has only become more contentious. Nevadans appreciate the economic boost that defense dollars have brought to their state for nearly a century. But, if resistance to recent proposals is any indication, most now oppose the treatment of their backyard as bombing ranges and toxic waste dumps. Everyone from Nevada’s most famous politician, the late former Senate majority leader Harry Reid, to Nevada’s most infamous rancher, Cliven Bundy, objects to being America’s “nuclear sponge.” The history of militarization in the West has made for “unlikely alliances” indeed.

Taylor Rose is a PhD candidate at Yale University and held the AHA Fellowship in Aerospace History in 2020–21.