A New Found Religion? The Field Surges among AHA Members

Specialists in religious history recently surpassed all other topical categories in our annual look at AHA members, raising interesting questions about what is attracting fresh interest in the field. 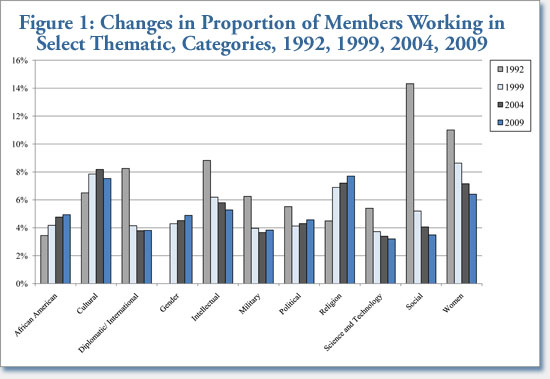 Demographically, the composition of the members who selected the topic is modestly different from the general membership in ways that may reinforce the recent growth of interest in religion, as the average age of those selecting the history of religion is slightly younger than the membership as a whole (more than half had received their highest degrees since 2000). Given that, it is not surprising that the members selecting the subject were more likely to be at an early stage in their careers—either doctoral students or employed at the assistant and associate professor level. Almost 40 percent of the religion specialists were in one of those categories, as compared to 32.6 percent of the membership as a whole.

The topic was slightly more prevalent among members studying early European and recent U.S. history, but the subject was taken up by at least a few members specializing in every continent and time period (Figure 2). 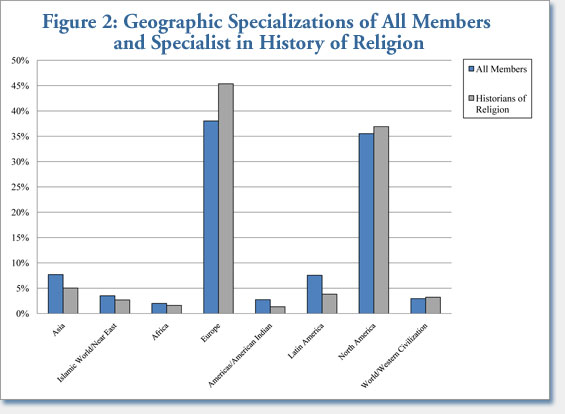 While the number of members indicating a research interest in the history of religion is now over 7.7 percent, the faculty listings in the Directory of History Departments, Historical Organizations, and Historians show a lower level of interest. Just 3.1 percent of the full-time faculty in the latest Directory have “religion” among their specializations, though this is significantly higher than it had been in 1990 (2.2 percent) and more than double the proportion in 1975 (1.4 percent).

This difference can be at least partially attributed to the differences between the two data sources. The Directory information is submitted by departments, and the field specializations are entirely open-ended—not limited to one of the 248 specialties in the AHA taxonomy. Nevertheless, the 553 history faculty listed in the Directory as specializing in the field were significantly fewer than the numbers in fields that religion has surpassed in the AHA membership database, including “social” (1,605), “cultural” (991), and “political” history (725).

Curious about the trend and the difference between the membership and the Directory listings, AHA staff contacted a number of members specializing in the field, and asked them about why they selected the subject, and why the field seemed to be enjoying a significant resurgence in recent years. We received helpful replies from 204 members.

A number of the respondents reiterated that the disparity with the Directory was partially due to the lack of alternative categories in the AHA taxonomy, as some noted that the absence of preferred labels (such as church history and historical theology) had forced them to accept religion as the closest alternative. Other respondents observed that while they write and teach history, they are actually employed outside of the traditional history departments that list in the Directory—in religious studies programs, seminaries, or interdisciplinary departments.

The respondents expressed wide differences about what fit under the label of the history of religion, embracing a variety of disciplinary approaches and methods—ranging from institution-focused church histories to a variety of theoretical and critical approaches. The specialists in the field also described a wide range of differing opinions about their personal relations to the subject itself—ranging from devoutly religious (in a wide variety of faiths) to the decidedly atheist.

But in general, they all seemed to agree that regardless of one’s personal beliefs, the subject itself had earned increasing attention over the past decade. Jon Butler (Yale Univ.) observed, “I think the category has become more popular because historians realize that the world is aflame with faith, yet our traditional ways of dealing with modern history especially can’t explain how or why. In short, the ‘secularization thesis’ appears to have failed and so we need to find ways to explain how and why it didn’t die as so much written history suggests.”

Among the respondents, four possible explanations came up again and again. The most common observation was that the rise of more activist (and in some cases “militant”) forms of religion—particularly their influence on the political Right and the events of September 11, 2001—had drawn new attention to religion as a force for change in human activity.

A significant number of the respondents also described the renewed attention to religion as an extension of the methods and interests of social and cultural history—noting a growing interest that extended back to E.P. Thompson. A number of the specialists noted that social historians had highlighted the interests of common people and cultural historians had supplied the tools for studying the influence of religion, but until recently, much of the work treated religion as aberrant. There was a perception that this left a significant opening for new research that treated religion on its own terms.

William Taylor (Univ. of California at Berkeley) encapsulated the observations of a number of respondents on this point, noting that he had come to the subject because it was so prevalent in the documentary evidence. “I came to recognize that [expressions of faith] were woven into just about every aspect of life, not separate subjects I could leave for another time or someone else. My ongoing research and writing about religious matters continues to be carried out in this spirit—not as a field apart, but as integral to my reckonings with how people then understood their lives and acted upon those convictions.”

Perhaps connected to this, a number of other members noted that the subject was also benefiting from a “historical turn” in a number of related fields—ranging from traditional religious and theological studies to disciplines such as anthropology—as well as the growth in postcolonial studies. Some of the members identified with these other fields—and in many cases earned their degrees in those fields—but found themselves increasingly identifying their work with the history discipline.

Finally, a number of respondents reported growing student demand for classes on the history of religion. Jeanne Kilde (Univ. of Minnesota) noted that “students in the late 1990s began coming to class with questions about religion,” due to its influence on recent elections, growing attention in the media, and an increase in public displays of religion. Lisa Bailey (Univ. of Auckland) added, “My classes on the history of religion are packed with students of all kinds of backgrounds and beliefs, who wish to understand why religion is such a cause for conflict in the modern world (and who are surprised to find that this is nothing new).”

In addition to the historiographic and professional considerations, a few respondents noted a more pragmatic reason—an increase in the number of foundations offering funds to support research in this area. The Templeton Foundation and Lilly Endowment were noted as the primary sources, but a few members noted an increase in the number of interdisciplinary appointments and endowed chairs as another reasonable cause for interest in the field.

Not surprisingly, perhaps, a number of members assumed that a significant part of the growth came from increasing attention to the rise of militant Islamic movements, but there is little evidence of this. Just 2.7 percent of the members who selected the history of religion were working on some aspect of the history of Islam—essentially unchanged from a decade ago.

As the ebb and flow of interest in fields such as cultural and social history suggest, this recent trend may also change. But for the moment at least, historians of religion seem very enthusiastic about the prospects for their area of the discipline.

—Robert Townsend, the AHA’s assistant director for research and publications, has been tracking and analyzing data about the profession in general and AHA membership in particular for several years.