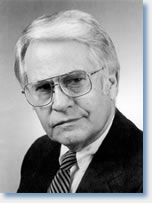 James C. Olson, accomplished historian and highly regarded university administrator, died on August 17, 2005, at the age of 88. A native of Bradgate, Iowa, Olson earned his AB in history from Morningside College in 1938, and his MA and PhD from the University of Nebraska in 1939 and 1942, respectively. Both institutions, and Chonnam National University in Korea, later conferred honorary degrees on him. He was a member of Phi Beta Kappa.

During World War II Olson served as a historian in the United States Army Air Force in the Pacific. In 1946 he was appointed director of the Nebraska State Historical Society, a position he held for 10 years. He also began teaching at the University of Nebraska at Lincoln, where he would become Regents Professor of History, chair of the Department of History, dean of the Graduate College, director of Graduate Program Development, and vice chancellor for Graduate Studies and Research.

Although his work varied, James C. Olson was best known as a historian of the American West. His first of several books, J. Sterling Morton (1942), which grew out of his dissertation, focused on the Nebraska resident and early leader in the American environmental movement, whose work led to the creation of Arbor Day.

In 1955, Olson published History of Nebraska, which helped set the standard for modern state and local histories. He elaborated on his understanding of that standard in his 1964 presidential address to the American Association for State and Local History. In that address, which was subsequently published under the title The Role of Local History, Olson allowed that state or local histories were not highly regarded among professional historians. If this were to change, he argued they would have to be more than antiquarian compilations of information of interest only to state and local readers. They would have to meet the highest professional standards, placing state and local histories into the larger context of national, even international, events. With co-author Ronald Naugle, History of Nebraska was reissued in a third edition in 1997.

In 1965 Olson ventured into Native American history with his publication of Red Cloud and the Sioux Problem, which, as the title suggests, was not only a biography of one of the best known Native Americans, but also an examination of the history of Native American–Anglo-American relations. He framed his history in the following manner: "Stripped to its essentials, the problem was the ancient one that always arose when one people attempted to dispossess another of their lands," but for which "no satisfactory solution" had yet been found (p. 3).

James Olson published two books on university administration: Higher Education: A Short Look Ahead (1979) and Serving the University of Missouri: A Memoir of Campus and System Administration (1993). His memoir, however, was not to be his last publication. Upon leaving the university presidency, Olson plunged into yet another book project, which appeared in 2003. Stuart Symington: A Life is the definitive biography of one of the nation's most influential political leaders of the 20th century—first Secretary of the United States Air Force, four-term senator from Missouri, and holder of six major presidential appointments. In 2005, shortly before his death, in recognition of this book, the University of Missouri Curators presented Olson with its Award for Scholarly Excellence.

Olson served on numerous national, state, and local boards, including his chairmanship of the Board of the Harry S Truman Library Institute, the Department of the Army Historical Advisory Committee, the Missouri Arts Council, and the Mid-America Arts Alliance. He served on the executive committee, and as secretary, of the Organization of American Historians, as well as on the editorial board of American Heritage.

Olson leaves behind two daughters and a wife of over 60 years, Vera Farrington Olson, with whom he co-authored four books, three for young readers on Nebraska history and, in 1988, on the sesquicentennial of the University of Missouri, The University of Missouri: An Illustrated History. In his foreword to Red Cloud, he gave "special thanks" to his wife and daughters, to whom he dedicated the book, "for cheerfully accepting the fact that vacations are times for visiting libraries, Indian reservations, and abandoned forts."

In 1997, University of Missouri president emeritus Mel George described James Olson as "a decent human being with good academic values and good personal values, who deals with people with integrity and humor." At his memorial, friends and colleagues described Olson as having "the patience for leadership and a passion for history."