The Status of Women and Minorities in the History Profession

The AHA tracks and keeps a wide array of data about the profession, but the most frequent inquiry we receive is about the status of women and minorities in the profession, particularly relative to recent trends in PhD production and employment.

As most of our inquirers are aware, there is a significant disparity between the profession and the general population that begins on the supply side. As Figures 1 and 2 reflect, women and minorities account for a relatively small portion of the profession, both in terms of the current cohort of history PhDs and the new PhDs being produced annually. 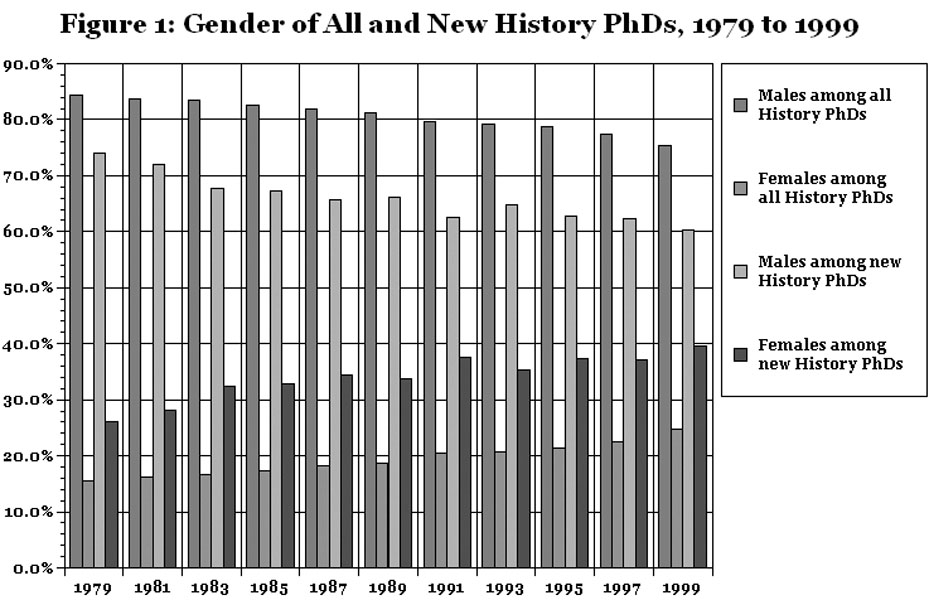 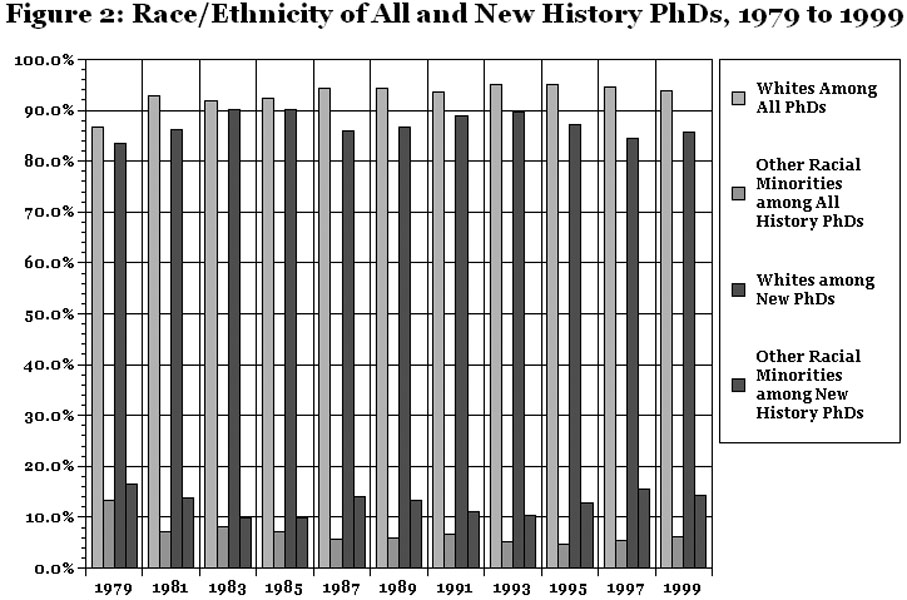 It may be unrealistic to expect the profession to reflect the demographics of the American population, where 51 percent of the population are female and 41 percent are members of a racial or ethnic minority, but it is worth noting that the representation of women and minorities in history lags well behind most of the other humanities and social science fields as well.3 As Figures 3 and 4 indicate, only the field of political science has produced a smaller proportion of women among recent cohorts of new PhDs. And only English has consistently lagged behind in the production of new minority PhDs.

A Glance Backward: Trends since 1979

An important factor in the relatively low number of women and minorities in the profession is their traditionally small proportion among new doctorates in history. As indicated in Figure 1, women accounted for just 15.6 percent of the cohort of history PhDs in 1979, and their numbers have risen only slowly since then. The proportion of racial and ethnic minorities stood at 13.3 percent among history PhDs in 1979 and declined in almost every subsequent survey (Figure 2). 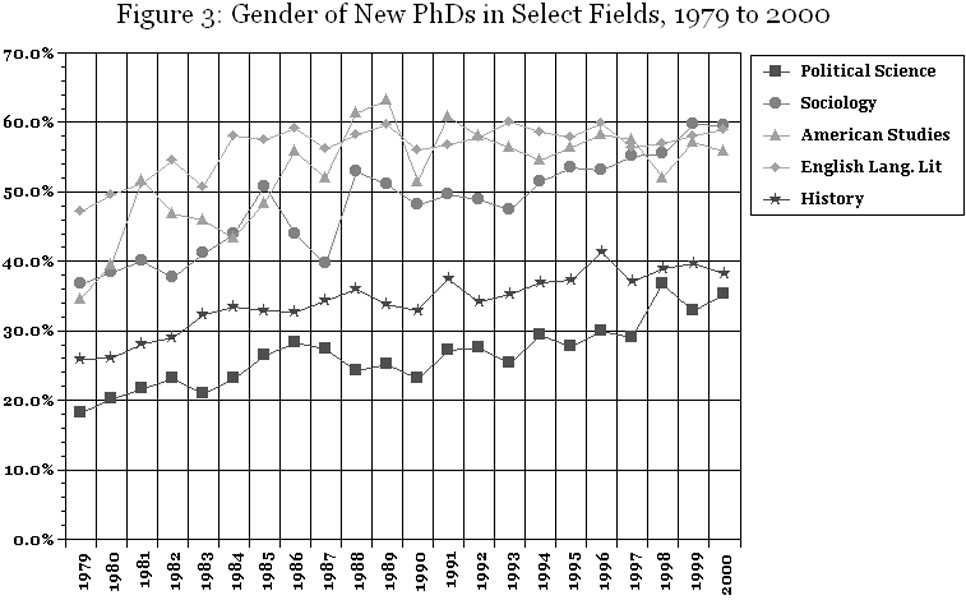 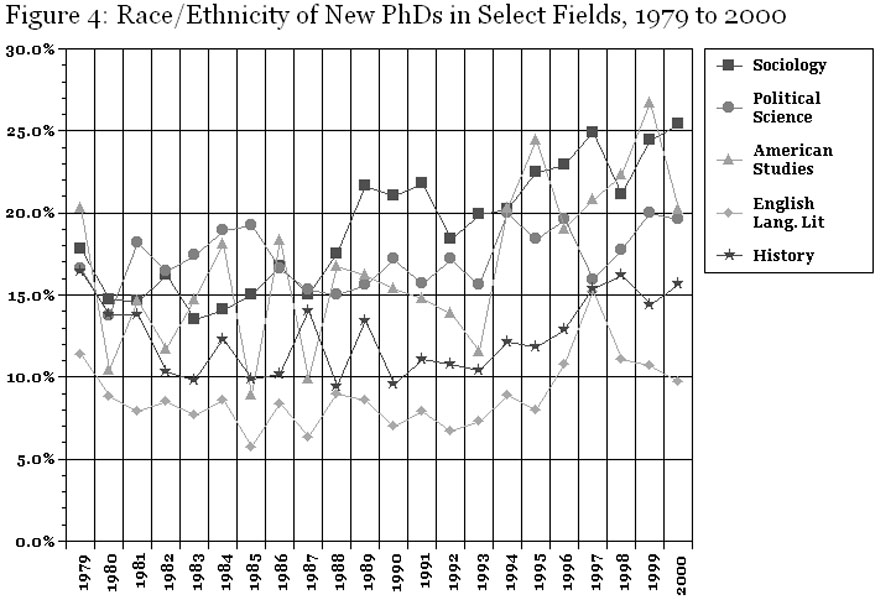 Members of racial and ethnic minorities comprised 10.2 percent of the faculty in the AHA survey, but no comparable information was collected on their salaries, ranks, or success in the tenure process.

Eight years later (in 1988), the National Survey of Postsecondary Faculty (NSOPF) found that the proportion of women in history faculties had grown to 17.1 percent. However, they were still lagging in hiring, as they comprised 18.2 percent of all history PhDs that year. And their gains at the top of the professional ladder remained minimal, as women comprised 8.2 percent of the history faculty at the full professor level and 14.2 percent of the faculty at the associate professor level. However, affirmative action programs provided a slight advantage to women at the entry level, where they comprised 38.9 percent assistant professors and 37.3 percent lecturers and instructors, which was slightly better than their numbers in cohorts of new history PhDs, at that time hovering around 34 percent.

The survey suggested that the proportion of racial and ethnic minorities teaching history was significantly smaller than it had been just a few years before (reflecting their diminishing numbers in the field, as indicated in Figure 2), representing just under 5 percent of the teaching faculty.5

The State of Women and Minorities in History Today

Recent efforts to bring more women and minority faculty into history faculties have translated into a modest advantage for women and minorities in the academic job market. As a result, the most recent National Survey of Postsecondary Faculty found that racial and ethnic minorities comprised just under 14 percent of history faculty, while women comprised 27 percent—somewhat more than their proportions among all history PhDs.6 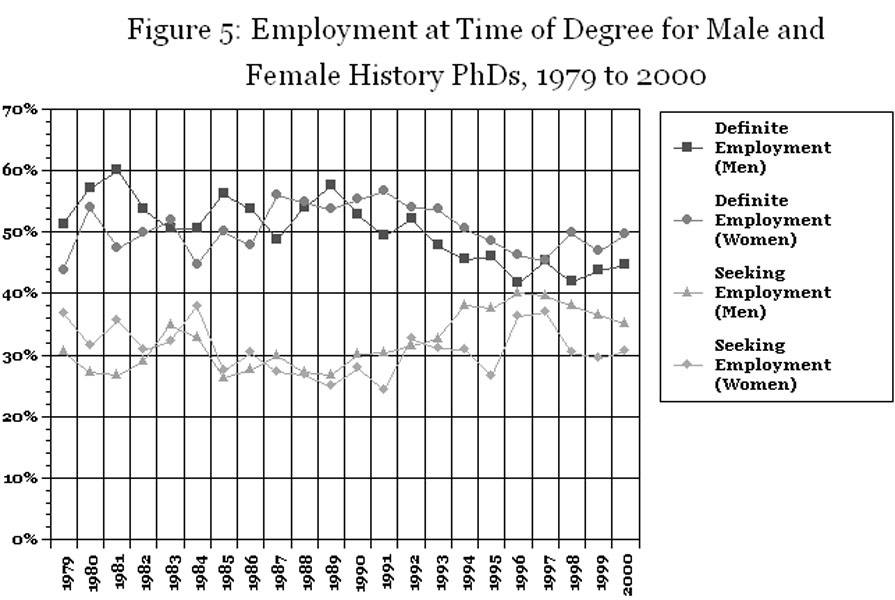 However, at the time of the 1998 survey, this advantage was still largely evident only at the profession's entry level. Women comprised 55 percent and racial and ethnic minorities represented 18 percent of the history faculty at the assistant professor level (well above their recent representation among new history PhDs). This created a sharp demographic disparity between the profession's upper and lower ranks. At the full professor level, men comprised 82 percent and whites comprised 91 percent of those teaching history.

Scarcity appears to translate into a slight financial advantage for racial and ethnic minorities when negotiating salaries. In 1998, the average salary for African American historians was $39,779 and $35,762 for Hispanic Americans, as compared to $35,558 for white Americans.

However, the recent advantages for women on the job market do not seem to have translated into equal success in terms of salary. Women earned an average of $35,388 compared to $35,924 for their male counterparts in 1998. This disparity appears to start at the entry level, as female assistant professors earn an average of $37,377 compared to $38,743 for male assistant professors. (The large numbers of part-time faculty pulled down the overall averages.)

—Robert B. Townsend is AHA assistant director for publications, information systems, and research.

2. Following the National Research Council's methodology, this counts everyone who received a history PhD in the United States under the age of 75.

3. Data from the U.S. Census Bureau at http://quickfacts.census.gov/qfd/states/00000.html.