Worries about employment opportunities for history PhDs aren’t new. Much ink has been spilled, often in the AHA’s own publications, bemoaning declining career prospects (read: tenure-track jobs) for history PhDs and auguring ill for the discipline. Moreover, it’s long been clear to the AHA that addressing the concerns of new and recent PhDs is imperative for all of us, not just professionally but ethically. After years of graduate study, often accompanied by opportunity and financial costs, new PhDs should not feel they must choose between the values that brought them to doctoral programs and reasonable compensation.

As historians, we know that context matters and that transparency in evidence lends nuance to any conversation. And often transparency requires data, publicly accessible and clearly presented. Until relatively recently, many graduate programs declined to track where their alumni ended up. Those that did often counted only those who secured academic employment, compounding the invisibility of careers outside the professoriate and reinforcing the idea that PhDs who did not become professors were failures. Though this perception is changing, it persists in our community, not only among students but among faculty, who are responsible for making sure they earn their degrees in the first place. Keeping track only of those graduates “placed” into academic careers is akin to saying the others don’t count.

This is where the AHA is poised to help. We don’t control the number of academic jobs posted or the number of PhDs awarded. But we do believe that every person with a history PhD counts, no matter what career path they follow.

Today, we’re releasing the final version of Where Historians Work, an interactive database that shows current employment data for all history PhDs earned in 2004–13—more than 8,500 of them—from every PhD-granting program in the United States. Where Historians Work allows users to see broad trends in PhD employment and to assess how such factors as gender, field of study, and degree-granting institution influence career outcomes. This tool helps answer long-standing questions about the discipline and, we hope, will prompt new conversations about where historical work happens, what it means to “do” history, and ultimately what it means to be a historian.

Where Historians Work is now the fullest picture of PhD careers in any discipline and attests to the wide variety of careers historians settle in to—on and off the tenure track, within and beyond the professoriate. The database’s interactive features allow users to talk about both the wide “diaspora” of historians and the minute patterns that shape individual stories. We hope to hear about users’ discoveries, but we also want to share a few of our own findings.

When You Earned Your Degree Is Important

It’s well known that the onset of the Great Recession in 2008 was disastrous for the academic job market, but its full effects on the career paths of history PhDs have been unclear. The 10-year cohort represented in Where Historians Work is split evenly by the Great Recession, which we can now see significantly changed the landscape of academic employment. Before and after the recession, roughly the same percentage of PhDs found work as faculty, but the academic jobs for those who graduated after 2008 were more likely to be off the tenure track. In 2017, when we gathered our data, about 55 percent of the 2004–08 cohort were working on the tenure track (at both 4-year and 2-year schools), and about 12 percent were in non-tenure-track jobs. But for those earning their degrees in 2009–13, about 46 percent were working on the tenure track, while about 20 percent were in non-tenure-track jobs. This long-term trend highlights the importance of advocating for stable, well-compensated employment for non-tenure-track historians in addition to pushing for the creation of tenure-track lines.

But So Is Your Program

Where Historians Work allows users to select single or multiple departments to compare the broad employment outcomes of programs’ graduates over time (fig. 1). It is no revelation that graduates of certain institutions stand a greater chance of finding tenure-track positions, particularly at research universities, but employment rates across sectors vary by department, too. These findings confirm previous research from the AHA (in The Many Careers of History PhDs) and additional studies. But Where Historians Work also lets users explore the career paths of graduates of particular PhD programs. This level of detail is granular enough to let students and faculty in specific departments define success by metrics appropriate to a program’s purpose and goals, but it also creates a holistic picture of what history PhDs actually do. These data encourage transparency in our discipline on many scales: among departments, within departments, even between students and advisers.

Fig. 1: Where Historians Work allows users to select individual or multiple departments to analyze the kinds of academic jobs their PhDs find.

The data in Where Historians Work show that gender has surprisingly little impact on broad patterns of career outcomes for historians with PhDs (fig. 2). Anecdotal evidence has long posited that women are more likely to be shunted out of the professoriate or into non-tenure-track positions, but Where Historians Work suggests otherwise. In the entire data set, PhDs were employed beyond the professoriate at a rate of 23.4 percent, on the tenure track at 50.8 percent, and in non-tenure-track positions at 16.2 percent. For women, those rates were 24.4 percent, 50.6 percent, and 15.3 percent, respectively. For men, the rates were 22.7 percent, 50.9 percent, and 16.8 percent. Additionally, gender seems to make a negligible impact on employment outside the professoriate. Employment rates in the nonprofit, government, private, and higher education administrative sectors show almost no variation by gender.

Fig. 2: Broad employment patterns for women differ little from those of men.

This does not mean that gender plays no role in the professional experiences of women. Such issues as compensation, tenure decisions, sexual harassment, parental leave policies, and more subtle forms of discrimination held back women historians for years before #MeToo and certainly will continue to do so as long as the status quo holds. But across sectors in our data set, men and women secured their positions at approximately the same rates. Parity may yet lead to equity.

As the AHA encourages PhDs to consider a broad range of careers, we often hear that there are fewer options beyond the academy for historians who don’t specialize in the United States (or a few other fields). Superficially, the data seem to indicate that there are many more jobs beyond the professoriate for Americanists: 28 percent of US historians (and 26 percent of historians of science) work outside the academy, compared to just 10 percent of historians of the Middle East or Asia, and 13 percent of Africanists. These numbers, however, are closely tied to how many tenure-track jobs are available in different fields: approximately 7 in 10 historians specializing in the Middle East, Asia, or Africa are employed in tenure-track positions at 4-year institutions, compared to only 4 in 10 US historians. This suggests that field of study made a difference in tenure-track prospects in 2004–13 and that far fewer historians in these fields decided to pursue other opportunities.

Job candidates are supposed to tailor cover letters to fit an institution, not just because institutions differ but because the jobs do, too. In like fashion, Where Historians Work emphasizes that jobs within the professoriate are highly varied. Like all the other jobs cataloged in Where Historians Work, the graduates of different programs find jobs teaching at different rates.

Women are not more likely than men to be shunted out of the professoriate or into non-tenure-track positions.

Despite ongoing erosions in academic hiring, two-thirds of history PhDs become faculty at postsecondary institutions. Yet less than 20 percent of them work on the tenure track at R1 universities, the job most have been prepared to do—and to want. Where Historians Work, however, shows that most faculty work at institutions that have teaching, not research, as their core mission. If one purpose of history PhD programs is to prepare future generations of faculty, our data suggests that learning to teach ought to be an essential component of graduate education; learning to think of oneself as being a teacher is important as well.

PhDs Have Agency, Too 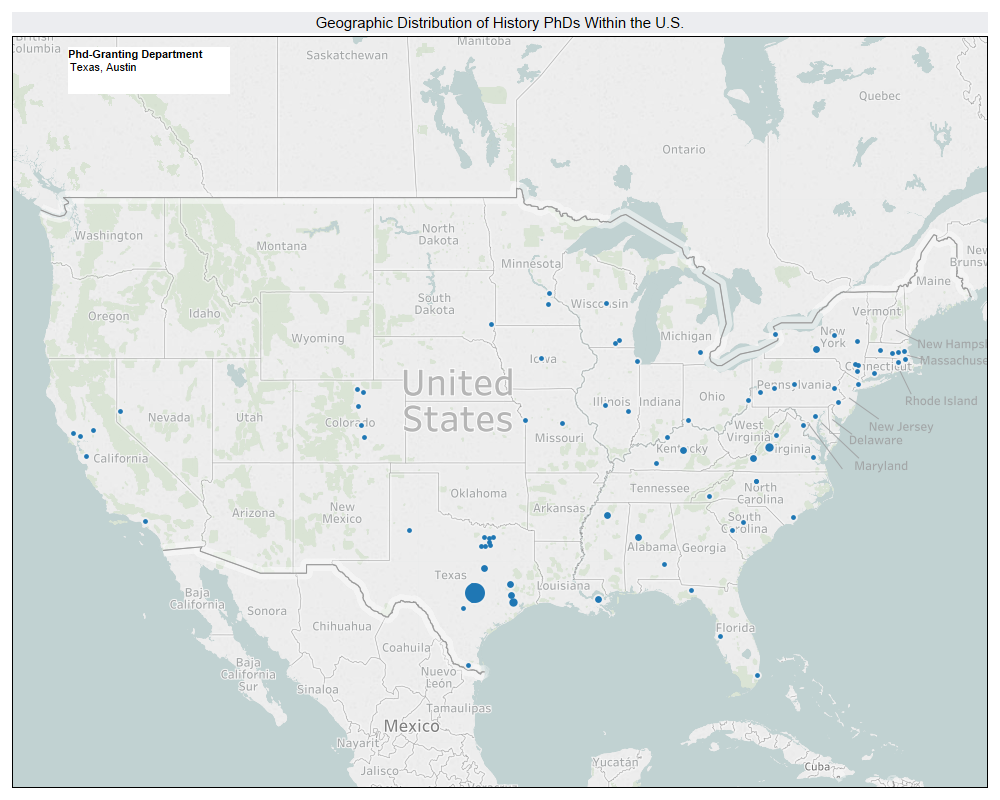 Fig. 3: As with many programs, PhDs from the University of Texas at Austin find jobs across the country but seem to concentrate in their home state.

Where Historians Work documents outcomes but nevertheless raises important questions about the motivations of the 8,515 individuals who compose the data set. One of the best ways to see this is through the geographical dispersion of history PhDs (fig. 3). Nationally, history PhDs are distributed in roughly the same way as the rest of the population. Yet graduates of many programs remain clustered in the cities or regions where they earned their degree, while other programs’ graduates seem to scatter. Where Historians Work cannot tell us why this is so, but it suggests that students make decisions about which doctoral programs to attend and which job markets to enter based on factors that may include regional or family ties. Geographical data may also indicate that today’s PhDs are not necessarily heeding the “be ready to move anywhere” dictum and are instead making decisions based at least in part on where they want to live.

Where Historians Work tells many stories. In addition to the clear decline of tenure-track job lines, it provides evidence that there are, in fact, many doors open to historians. These stories are familiar ones, but we can now see them in the context of national data and in relation to the smaller-scale stories that programs, people, and professions have to tell.

Seeking quantitative data on the career landscape of history PhDs signals a commitment to the importance of rigorous historical thinking. The AHA is dedicated to the promotion of history and historical thinking in all areas of life, including the discipline in all its forms and historians in all their variety. Now that we can enumerate a fuller array of outcomes, we should be able to ask better questions about how all PhDs are prepared for the work they will do.

Emily Swafford is director of academic and professional affairs at the AHA. Dylan Ruediger is the AHA’s coordinator, Career Diversity for Historians and institutional research.