Five Myths about Denver, Host City to the 2017 Annual Meeting

For the duration of the next thousand words, consider me your tour guide through the Mile High City. The majority of you will fly into Denver International Airport (DIA) so we’ll begin there, tackling myth number one in the process: that crisscrossing this great city requires a car. It does not. Downtown Denver is eminently walkable—the Brookings Institution grades it the nation’s fourth most walkable downtown—with a cannily expanding system of public transport ready to take you those places your own legs cannot.

Renting a car at the airport is easy enough but by no means necessary. Instead, take the Denver Regional Transportation District’s A Line ($9 and 37 minutes each way) from DIA to Union Station. The jewel in the crown of a thriving Lower Downtown (LoDo), Union Station is less than a mile from the annual meeting hotels and a not-to-miss destination in its own right, particularly for historians. The station’s soaring ceilings and terrazzo floors, its vintage shuffleboard tables and inviting leather sofas, all conspire to give its bustling interior the feel of an earlier era—one of sumptuous train travel through an expansive Old West. Exit the station through the front doors, turn right onto Wynkoop Street (named for Edward Wanshaer Wynkoop: Civil War officer in the First Colorado Volunteer Cavalry and one of the city’s founders) and walk a half block to the 16th Street Mall, where you can take a free shuttle 10 short stops to the Marriott; 11 stops to the Hyatt; or 14 stops to the Sheraton. The Mall Shuttle runs the length of downtown Denver—a mile and a half from LoDo to the State Capitol. 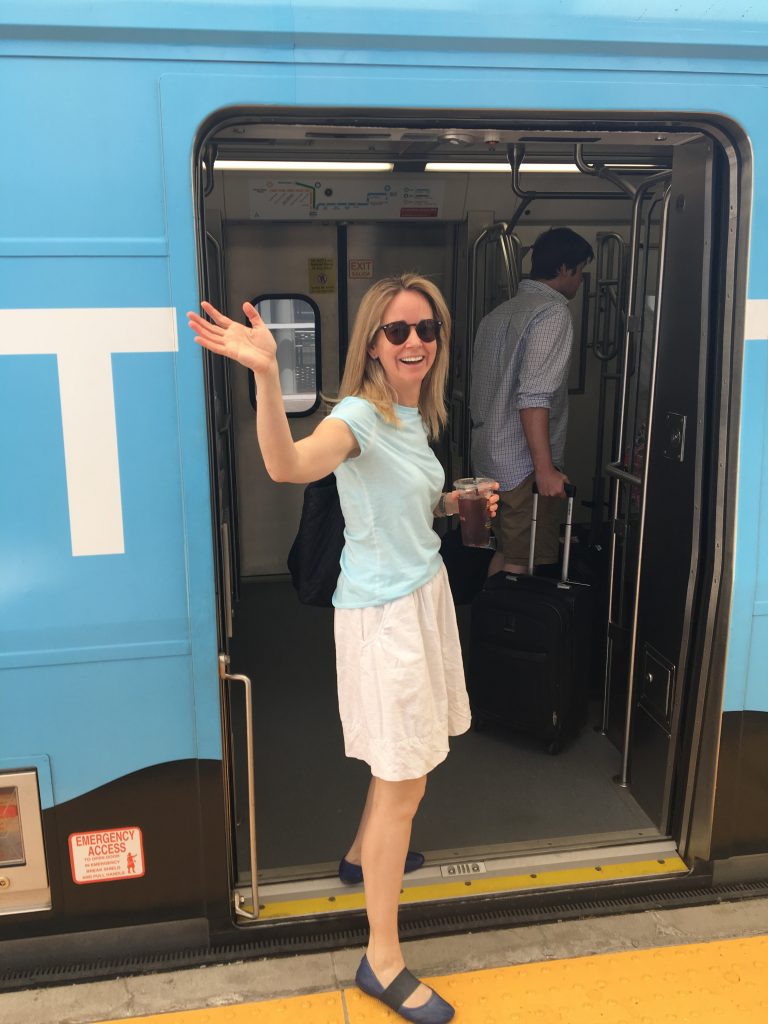 The author, boarding the train from Union Station to DIA. Credit: Sarah Fenton

But if Union Station seduces you then stay awhile and begin dismantling myth number two: that the food in Denver is, well, nothing to write home about. Terminal Bar serves Colorado craft beers from the station’s original ticket windows. You can stop for a quick and buzzy breakfast at the deceptively named Snooze; pick up lunch provisions at the Mercantile; or settle into the station’s mezzanine level as the sun sets over the Rockies to sample the oysters at Stoic & Genuine. Amble north to 18th Street for the Wynkoop Brewery—opened by Colorado’s current Governor, John Hickenlooper, in 1988—which keeps a rotating selection of 20 local beers on tap and old Hickenlooper campaign paraphernalia on the walls. On nearby Larimer Street, Biker Jim serves up gourmet hotdogs made from rattlesnake, reindeer, or wild boar, with sides of charred tahini cauliflower or deep fried pickles. Over the past decade, Denver chefs have applied distinctly local twists to a variety of international traditions, from the charcuterie at Eat + Drink Denver, to the Hamachi jalapeno sashimi at Sushi Sasa, the Korean hot fried chicken sliders at Cholon, or the Colorado quinoa at The Kitchen, Denver—all of them within walking distance of the annual meeting hotels. Denverites believe they have some of their nation’s best Mexican food and walkable examples abound, from Tamayo to Machete to Mexico City.

Denver’s surprising varieties of food hints at something greater: a stubbornly ingrained image—and myth number three—of a place comprised entirely of smiling, dimwitted white guys on skis. Denver is neither in the mountains nor notably white (though if you’ve been away awhile, it does seem smiley). The largest city within a 600-mile radius, it’s been the region’s cultural capital for over a century. Its population has more than doubled since 1960 and remains 31 percent Hispanic or Latino. It is the most educated city in the United States, with a greater percentage of high school and college graduates than any major metropolitan area. Downtown Denver is home to the University of Colorado’s Auraria Campus; combined with two other colleges, it houses over 30,000 students on land adjacent to the annual meeting hotels.

Which brings us to myth number four: the sense that Colorado’s many marvels are exclusively natural rather than cultural or structural. Au contraire. The 16th St. Mall, where you’ll hop on and off that free shuttle? It was designed by I.M. Pei in a repeating granite pattern of red, white, and gray to resemble the skin of a diamondback. Anchoring the city’s neighboring cultural district is an extension to the Denver Art Museum (DAM) that, when it opened in 2006, became Daniel Libeskind’s first design built in the United States (the museum’s North Building was designed by Gio Ponti in 1971). Stand outside the museum and compare Libeskind’s weighty construction to the building next door, a disarmingly playful pastiche intended by architect Michael Graves to reflect the skyline laid out around it. This is the downtown branch of the Denver Public Library, the largest library you’ll find between Los Angeles and Chicago and a welcoming space to get some serious work done—should that be on your schedule. The Blair Caldwell African American Research Library, in the historically rich Five Points neighborhood, also requires a visit, as does the History Colorado Center. And should I fail to mention the Clyfford Still Museum, next door to the DAM, my mother may well disown me and for good reason: it’s magnificent. 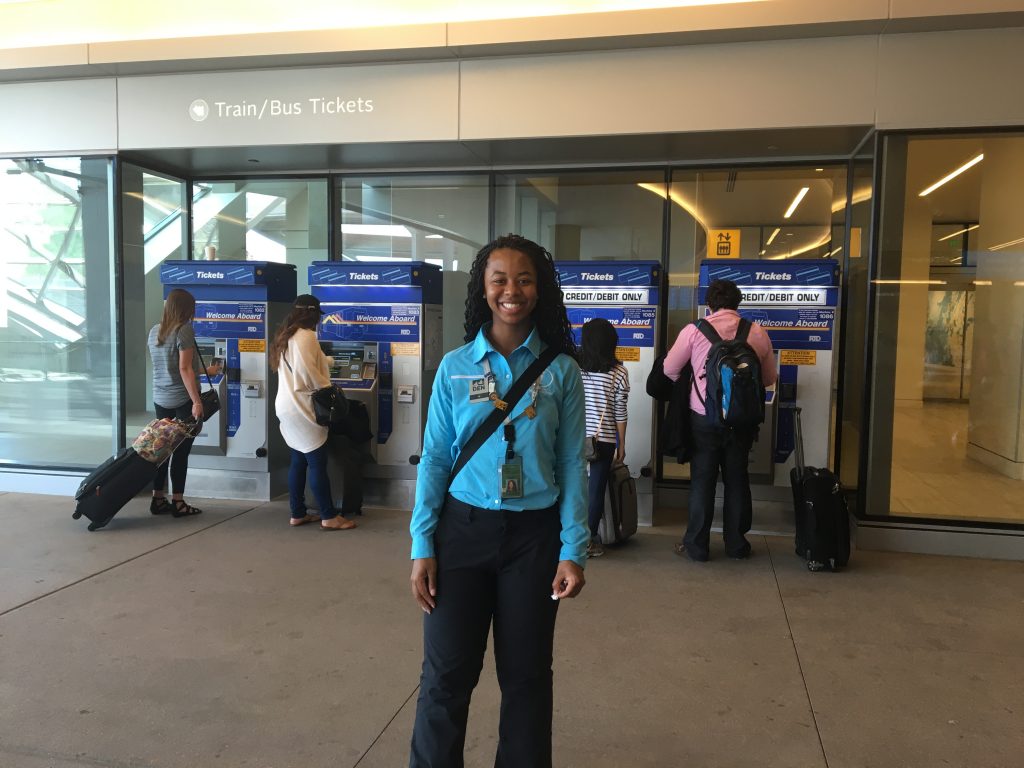 Finally, to myth number five, which my fellow AHA editors might wish I’d addressed first: inclement weather. This myth is simply too elementary to be of much interest, meriting no more than the facts. Denver sees the sun at least 300 days a year and records more annual hours of sun than San Diego or Miami Beach. Winters are mild, hitting a daily average high of 45 degrees and keeping the city well warmer than, say, Boston or St. Louis. I grew up in Denver before attending college in New York and graduate school in Chicago—years when I positively longed for Colorado winters. And look: having just completed a book about New York and living now in London, I am not immune to the charms of older, bigger cities with wetter winters and fewer smiles. But Denver remains my first love: the friendliness and approachability that characterize Coloradans reveals something deeper and more sustaining than mere affability. Its “olden days” are (historically speaking) quite recent, and that youthfulness is invigorating. To be sure, the Old West is easily summoned from Denver’s brick-fronted Lower Downtown—which offers one of the greatest concentrations of preserved Victorian buildings and warehouses in the United States—but this isn’t the polite past of Merchant Ivory or Jane Austen. Denver has an air of unfinished business, of stories untold. So come on, all you historians! Just remember to pack your sunglasses.