Roman Vows to the God Mercury, Preserved in Silver: The Berthouville Treasure on Exhibit in the United States

In antiquity, Roman generals gathered up objects made from precious metals and melted them down to pay their troops. Since most silver artifacts from antiquity met such a fate, the objects found in 1830 by a farmer plowing a field in the village of Berthouville, France, are considered a major treasure. The objects recently underwent extensive conservation at the Getty Villa, where conservators Susan Lansing Maish and Eduardo Sanchez spent many hours examining the pieces through a microscope and treating them using a variety of methods, including cleaning, steaming, fumigating, and soaking in mild solvents. In the cleaning process, Maish uncovered details, gilding, and hidden inscriptions. After the conservation work was completed, the Berthouville Treasure was on exhibit at the Getty Villa and will be traveling around the United States through 2017. 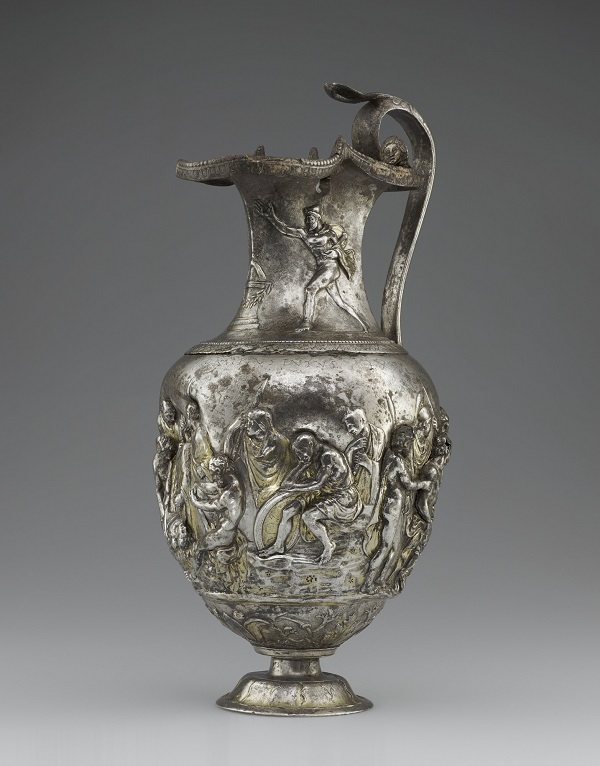 When the Getty’s senior photographer Tahnee Cracchiola saw the cup with centaurs dedicated to the god Mercury, it brought tears to her eyes. The well-to-do Roman Quintus Dominitius Tutus dedicated nine vessels, including several cups, two pitchers, and a beaker weighing a total of 8,722 grams to the god. “Mercury was much more important in Gaul than in Rome. He fulfilled the role of messenger to the gods, but he was also the god of agriculture, craft, money, commerce,” Kenneth Lapatin, curator of the exhibit Ancient Luxury and the Roman Silver Treasure from Berthouville, said in a phone interview. “Caesar commented that Mercury was especially venerated by the Gauls. That’s why there’s this shrine and other shrines to him. Of course, it’s much nicer to give the god a ritual vessel with his image on it than a bag of coins or a lump of gold or silver. The major dedicators, who offered pounds and pounds of precious metal, were relatively quite wealthy. People who might have dedicated a small cup had some surplus income, but they were not super rich.”

Before taking silver items to the temple, it’s possible that Quintus had placed some of them in his dining room to serve as conversation starters at his banquets. “In the case of the Trojan War pitchers, they feature interlocking narratives,” Lapatin said. When guests gathered around the dinner table, the host would share the scenes on the pitchers with them, and a discussion of what they depicted would ensue. Guests might raise such questions as “What does it mean to be a hero?” and “What is virtue?” “We know from literature that possessing such vessels, understanding the myths, and being able to discuss them were highly prized cultural skills,” Lapatin said.

“These pitchers have complex scenes,” he emphasized. For example, one pitcher depicts “Achilles dragging the body of Hector on one side, and Achilles with his foot pierced by an arrow on the other. Contrast those images with those of Achilles mourning Patroclus, and Priam ransoming the body of Hector and Achilles on the other pitcher. The ancients loved these juxtapositions. The two sides of each pitcher are talking to each other, and the two pitchers are talking crosswise to each other. Odysseus, depicted on the neck of each, is not the great war hero, but the crafty, shifty hero, and he’s involved in scenes of betrayal and sacrilege.” The images depicted on the pitchers form a “meditation on what it is to be a hero, how you should keep your promises, how you make peace with your enemies. These ideas are encapsulated and epitomized” in the scenes on the pitchers.

Although Quintus dedicated several beautiful pieces of silver to Mercury, he was not necessarily an especially religious man. “Ancient religion was more transactional than modern religion,” Lapatin continued. “Gifts were given to the gods in hopes of future return, or you made a promise and you’re paying the god back. The more you dedicate, the greater your chances of success.”

Other men and women, freeborn and freed slaves alike, dedicated silver items at the same shrine in rural Normandy. “To have a silver cup or bowl, you didn’t have to be rich. You had to be well-to-do,” Lapatin said. “It’s difficult to translate that into modern terms of rich, middle class, or poor. But if you were poor you didn’t have silver to dedicate.” 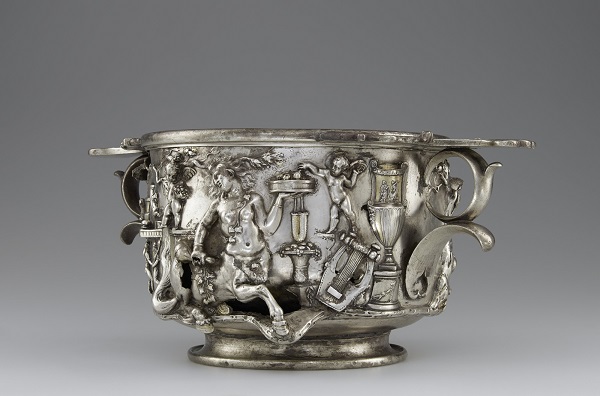 In fact, many items bear inscribed dedications. One beaker reads “MERC AVG Q. DOMITIVS TVTVS V.S.L.M.” (To Augustan Mercury, Quintus Dominitius Tutus dedicated this willingly in fulfillment of his vow as is deserved.)

Lapatin points out that while the objects, dedicated by different individuals, are of varying quality, the craftsmanship of several is masterful, ranking among the best Roman silver to survive to this day. “The techniques aren’t a mystery, but we can’t make these today. We don’t have the market. We haven’t been trained since we were five years old.”

“The Berthouville Treasure has been known since 1830 and was fully published in 1916, but it has been sitting in a small museum for almost 180 years, and people lost track of it,” according to Lapatin. “We know from ancient literature and Roman frescoes how important silver was in so many aspects of social and religious and economic life. This collection is a great opportunity to show people how stunning the craftsmanship is and aspects of its ancient and modern history.”

The Berthouville Treasure will be on display in San Francisco’s Legion of Honor from September 19, 2015, to January 10, 2016, after which it will travel to Kansas City, Houston, and Atlanta.