This summer, I opted to swap Chicago’s mild heat for the scorching Bermudan sun. The 18th-century Bermudan sun, to be more precise. Without leaving my desk in the Digital History Lab at the University of Rochester, I’ve explored the streets and structures of 1770s St. George’s, the oldest continuously inhabited English town in the New World. Neither Bermuda nor the British Empire lies within my area of expertise. In fact, the dissertation I’m wrapping up right now is about the city of São Paulo, Brazil, around the turn of the 20th century. So what is a historian of modern Latin America doing with Bermuda?

The Department of History at the University of Chicago would call it making history work. With the support of the Andrew W. Mellon Foundation and as part of the American Historical Association’s Career Diversity for Historians initiative, the department is funding for the first time this year two Making History Work Summer Internships. The internships, designed and competitively proposed by graduate students, offer recipients the opportunity to prepare for careers outside the professoriate without putting their degree on hold.

With that aim in mind, I proposed to join the Virtual St. George’s team at the University of Rochester. Virtual St. George’s is the brainchild of Michael Jarvis, a historian of the Atlantic world and the director of the Digital Media Studies Program at Rochester. UNESCO finds the real St. George’s remarkable for its surviving specimens of military engineering, but Professor Jarvis saw another opportunity in the well-preserved city: to bring history to (digital) life. As its name implies, the aim of the project is to recreate historical St. George’s in the form of an interactive simulation. Or, in digital humanities lingo, to game history. With a broad audience in mind, the final form of Virtual St. George’s will enable players to better understand the sights, sounds, and interactions once possible within Bermuda’s first permanent English settlement. 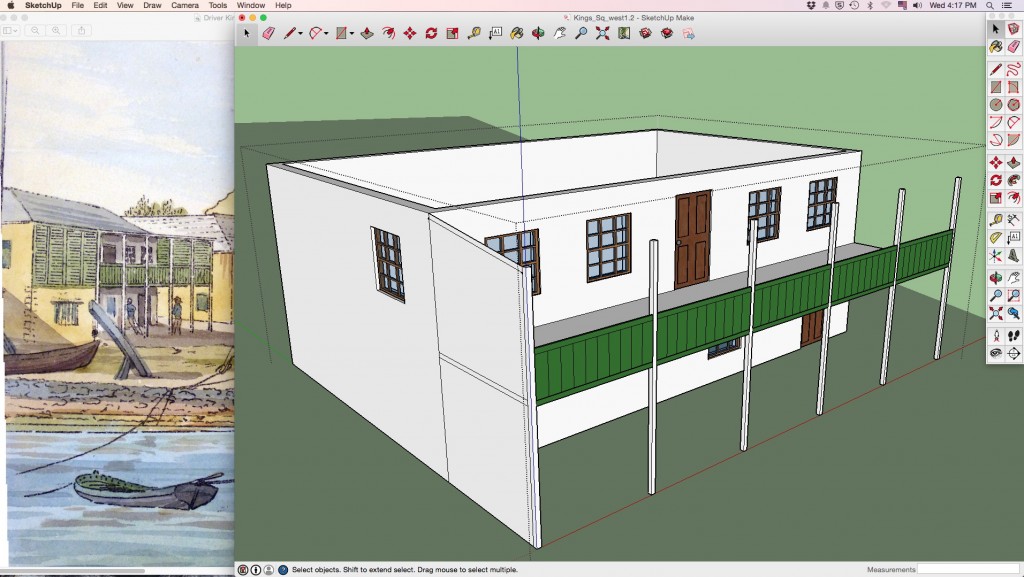 Virtual exploration requires a setting, and so for now we’re modeling the built environment of St. George’s. My task, specifically, consists of constructing in three-dimensional, digital form the exteriors of residential and commercial buildings from the 1770s. I do so using a program called SketchUp, although the final product will be exported into Unity, a game-building platform. To determine the dimensions and design of my models, I rely on a combination of maps and watercolors, the latter of which were painted around 1820 by Thomas Driver for military purposes. Thanks to Bermudan preservation efforts, I’m also able to snag the footprints of existing buildings so that I can better estimate a structure’s size and location. Satellite images from Google Earth are also helpful, and SketchUp works with Google Earth so that I can precisely geolocate each model. Admittedly, this method doesn’t result in perfectly accurate reproductions, but it’s sufficient for building the backdrop to a historical game.

I should take that back: if there’s anything that modeling teaches you, it’s that space is much more than a backdrop. In fact, that’s part of the point of Virtual St. George’s. Once the project is completed, players will be confined to the range of opportunities and limitations possible within the built and natural environments of the tropical port town. Of course, other factors—an avatar’s skin color or sex, the political climate—will also enter the equation, but all scenarios will need to take into account the setting we are constructing. These scenarios will undoubtedly fail to capture the complexities of history. Indeed, the juxtaposition of game and history should serve as a warning against falling into the pit of determinism (for more on the study of history through games, a good place to start is Play the Past or the edited volume Playing with the Past). Still, as Henri Lefebvre and contributors to the “spatial turn” since have argued, the role of space in shaping social practices and perceptions can’t be ignored. We—historians, game designers, players—also shouldn’t ignore the ways in which the built environment is, in turn, the product of a society’s needs and beliefs.

And that’s where I, the historian of Latin America, step in. My dissertation examines theaters to understand how an urban public was forged in rapidly growing São Paulo. Central to my analysis is space itself: I analyze architectural plans, maps, construction permits, and other sources in order to understand how the establishment of over 200 auditoriums altered who participated in São Paulo’s public life and in what ways. Despite the distance in space and time between São Paulo and St. George’s, the process of virtually recreating the latter is enhancing my capacity for imagining and grasping how Paulistanos experienced the transition to urbanity. After spending hours modeling a particularly tricky element, for example, I can’t help but wonder about the materials, labor, and economic exchanges involved in a building’s construction. 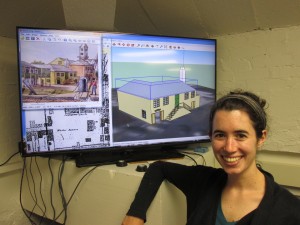 And, yep, sometimes I do get stuck for hours. I’ve always had a knack for spatial visualization (LEGOs were my favorite toy as a kid), but modeling relies on software, and every software has its logic. My internship has pushed my computer literacy in new directions, as well as helped me dust the cobwebs off of all that math I once knew (the length of the hypotenuse in a 30º-60º-90º triangle, anyone?). I’ve also found myself outside my comfort zone in terms of project management: Virtual St. George’s requires that I regularly rely on colleagues who range from undergraduate students to staff members at Rochester’s Digital Humanities Center. In the process, I’m learning a lot about collaboration and the social architecture of a university, not to mention the physical architecture of the British Empire. I’m also discovering how to communicate history to a wide audience in what, for me, is an entirely new medium. In all of these ways, I’m building what the AHA calls my “intellectual self-confidence,” my ability to quickly process information and apply my expertise to new situations. To sum it up, I’m making history work: utilizing and expanding my knowledge, skills, and curiosity as a historian and as a professional. Who knew so much could be learned under the Bermudan sun?

Aiala Levy is wrapping up her PhD in Latin American history at the University of Chicago. Her work on urban development and the arts in São Paulo, Brazil, can be found in Planning Perspectives, Istor, and on her website, www.aialalevy.com.

As we’ve written about previously, graduate school can offer a variety of opportunities for history students to apply their unique skills while completing their degrees. What kinds of experiences have you had to explore new work environments while in school? Let us know by leaving a comment below.