Historian of the US 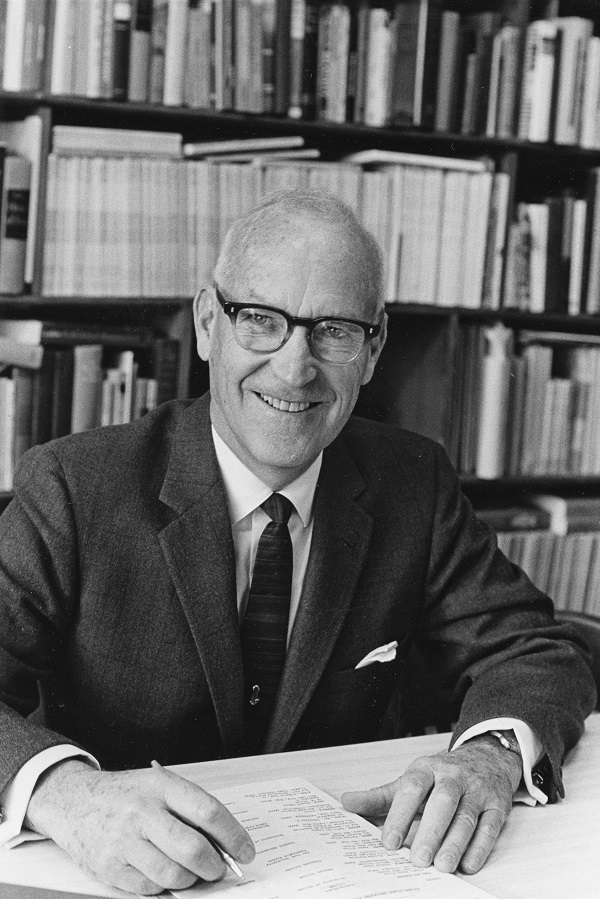 Distinguished Stanford professor of American history George Harmon Knoles passed away on August 27, 2014, at the age of 107. George Knoles was born in Los Angeles on February 20, 1907, to Tully and Emily Knoles, the fifth of eight children; Theodore Roosevelt was president in the year of his birth.

George's father, Tully, moved the family to San Jose in 1920, where he served as president of the University of the Pacific, which was relocated to Stockton, California, in 1924. An educational pioneer, Tully Knoles remained president of the University of the Pacific for 27 years.George Knoles received his BA in 1928 and MA degree in 1930 from the University of the Pacific. He married Amandalee Barker, a student at the University of the Pacific, in 1930. They would have two daughters, Anne Knoles Nitzan and Alice Laurane Knoles Simmons. In 1935, Knoles joined the Stanford faculty as an instructor in history and worked simultaneously on his PhD, which he received in 1939 from Stanford. In World War II, he served as a lieutenant in the navy. He compiled his naval histories and recollections after the war. He returned from active duty to resume teaching at Stanford in 1946 and rose through the academic ranks to become the chair of the history department and the Margaret Byrne Professor of American History before his retirement in 1972.During the war Knoles spent time in the Pacific. He returned to Japan to teach at the University of Tokyo during several summers of the 1950s as part of the Stanford Study Abroad program, and again in 1971 as a Senior Fulbright Scholar. He hoped to rekindle the friendship between Japan and the United States that had existed before the war. He also taught as a visiting professor at UCLA and the University of Wyoming while on leave from Stanford. Through Stanford's Study Abroad program, Knoles traveled with his family to England, France, Germany, and Austria in the 1960s, and he taught in England and France.

During his time abroad, Knoles encouraged international peace and understanding through educational and cultural exchanges, and sustained enduring friendships with foreign colleagues and students he met and entertained during his overseas travels.

When they returned to the United States, Knoles and his wife participated in the social life of Stanford University; George served as a field judge during Stanford Track Meets, and Amandalee served as president of the Stanford Faculty Women's Club. Knoles was a sought-after speaker for alumni events and enjoyed attending receptions for visiting dignitaries with his wife.

Knoles wrote numerous journal articles and published several books, includingThe Presidential Campaign and the Election of 1892, The Jazz Age Revisited: British Criticism of American Civilization During the 1920s, and The New United States: A History Since 1896. Knoles coedited Readings in Western Civilization  first published in 1951 with colleague Rixford K. Synder; the book was widely used in university Western civilization courses throughout the United States, including at Stanford. A series of papers written by Knoles and three other scholars who presented at a Stanford conference for the Institute of American History held in March 1963 were published in book form as Crises of the Union, 1860-1861. Papers from another conference held in 1970 were compiled and published by the California Historical Society as Essays and Assays: California History Reappraised. His book Responsibilities of Power, 1900-1929 appeared in 1967. Knoles wrote a new introduction to British author G. K. Chesterton's What I Saw in America for its republication in 1968. As a specialist in American social, cultural, and intellectual history, Knoles often wrote on British travelers in America and British appraisals of the United States. In the introduction to his Jazz Age Revisited, Knoles suggested that contemporary Americans "can make use of the perspectives and insights of foreign observers in their efforts to come to terms with their own culture." Knoles's analysis of British travel commentary continued the work of Allan Nevins's American Social History as Recorded by British Travelers (1923) and offered a guide for the United States in world leadership. For him, foreign travel commentary provided a mirror for Americans.

Knoles was a vital department member. He compiled the bibliography of David Potter's works that appeared in Potter's posthumous publication Freedom and Its Limitations, edited by Don E. Fehrenbacher, in 1976.

Knoles was widely admired as hardworking, diligent, and rather formal but with a wry sense of humor; he spent long hours in his office, counseling students and writing letters of recommendation. He wanted his students to succeed, to find excellent jobs in reputable universities, and to enjoy a well-rounded life, one of the famed hallmarks of the Stanford philosophy. He donated his professional and personal papers (1920-1994) to Stanford University; they are located in the Green Library's Department of Special Collections and University Archives (call number SC0328). This collection includes lecture notes, syllabi, manuscripts, photographs, committee minutes, royalty statements, and correspondence with scholars such as Thomas A. Bailey, Allan Nevins, Frank Friedel, John F. Kennedy, Rixford K. Snyder, E. E. Robinson, Arnold J. Toynbee, Gordon Wright, and Max Savelle, among many others. The collection also includes his naval logs and war records and his World War II letters home. Knoles hosted a special reception at his home for famed visiting British historian Arnold Toynbee in the spring of 1965; he invited all of the Stanford history graduate students, greeting every student at the door. This kind gesture of inclusive invitation was typical of Knoles's generosity and enthusiasm for his students to do well and have all possible academic scholarly advantages while studying at Stanford. Knoles led both colleagues and students by his competent example of a long life well lived.