As Shatha Almutawa reports in the September issue of Perspectives on History, a humble French farmer’s 1830s discovery of a trove of Roman silver artifacts has been carefully restored by conservators at the Getty Villa. Here, art conservator Susan Lansing Maish takes us behind the scenes of efforts to restore and interpret this priceless treasure.

Editor’s note: This interview has been edited and condensed for length. 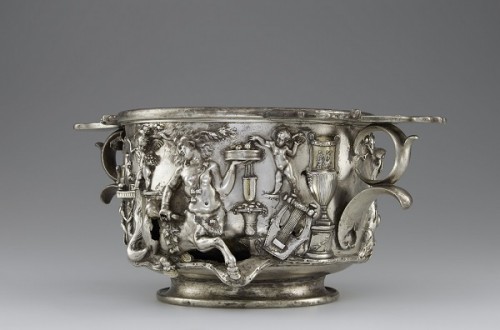 A treasure of Roman silver—found by a farmer in Normandy in 1830 and owned by the Bibliothèque Nationale de France—has recently been conserved at the Getty Villa. It will be on exhibit at the San Francisco Fine Arts Museum from September 19, 2015, to January 10, 2016, before traveling to several US venues and returning finally to France. Here we interview Susan Lansing Maish, one of two conservators working on the Berthouville Treasure.

Tell us about your experience working on the Berthouville Treasure.

The artifacts arrived at the Getty covered with dark coatings of grime and tarnish. Many were simple in shape, but a number exhibited high relief or repousse. Sometimes I couldn’t identify the imagery until removing the extraneous materials, exposing amazing little animals, whimsical flowers, wreaths, hair ornamentation, and other surprising details. And the gold! We knew that many of the pieces had gilding but could not see the full extent until removing all the grime. Later analysis revealed that about 25 objects contained gold that was applied using a technique called mercury amalgam, or fire gilding.

What was your favorite piece in the collection?

A beaker depicting images of the Isthmian Games (a seated Zeus figure, an athlete, a younger woman, a palm tree) with gilding in unusual designs (a checker-boarded stool and leopard-like spotted background). We examined it under the microscope and took digital photographs, but still don’t understand how they created the patterned motifs. That’s why it’s so intriguing.

I worked on the piece very slowly, using only solvents. Cleaning the artifacts revealed stories of how they’d changed since their discovery in 1830, enabling us to piece together a historical record. Highly detailed renderings (called heliograuvres) made of the beaker in 1916, for instance, reveal a now-missing head on the winged horse, Pegasus—though my search through the loose fragments accompanying the treasure failed to turn up anything resembling a horse’s head.

Tell us about another piece that you enjoyed working on.

The smaller statuette of Mercury had a historic wax sculpture—made by a well-known artist of the 1830s, Alexis Joseph Depaulis, to hold the fragments in place—that had discolored with age. Historic descriptions indicate that the wax would have been lighter than it appears today. We could see the metal armature inside, using an x-ray, but could not safely lighten the wax surfaces.

I also discovered hidden traces of gold in the statuette’s drapery; we now suspect the entire tunic was once gold. The conservation treatment employed by my colleague Eduardo Sanchez and I improved the pieces visually while protecting them from tarnish and other pollutants, preserving historic and archaeological evidence for future research.

Walk us through the conservation of an item.

We keep notes on everything we do, preparing thorough documentation for every object. We note all materials used, so that French curators and future conservators will know what we’ve done to each piece. Everything is transparent.

We began with a thorough visual examination of every object, looking for weaknesses and breaks. Archeological silver is a fragile material, with cracks and micro fissures. We handle it with great care and spend considerable time writing condition reports. Highly detailed photographs taken by Tahnee Cracchiola, from our imaging service department, allow us to enhance images on the computer.

We radiographed the more complicated pieces to better understand manufacturing details, and found hidden inscriptions on the liners of two large Centaur cups. Another conservator, Jeffrey Maish, saw a shadow on the x-ray that I could not; he enlarged the image and found letters that the Getty curator for the Berthouville, Kenneth Lapatin, identified as weight measurements for the inner cups.

What was one of the discoveries you made?

I was cleaning a small leaf decoration on the handle of one of two cantharos cups when I realized that a section of one handle felt different, more porous. I knew there was a lone leaf among the fragments, so Lynn Lee of the Getty Conservation Institute analyzed them all. The leaf that felt different is not the same alloy as the two others; the lone, separate leaf is. Scientific testing had confirmed my gut observation.

Do you usually know the history behind the pieces you work on?

Rarely. The wonderful thing about this project: we know exactly when and where these objects were found and by whom; they’d been studied in 1916 and again in the 1980s. I’ve never worked with a collection so rich in art historical information.

Does knowing the history influence your experience with it?

It didn’t influence how I treated the objects from a material standpoint, but it made them more interesting. Cleaning silver can be tedious—we put music on high volume, talk and clean. As I worked, I thought about how these objects were found and the people who used them. With all our pieces we try to find parallels, looking for similar objects in other collections, doing historic research.

As a conservator, this is the best project I’ve worked on. Good collaboration, a wealth of information, and time—Eduardo Sanchez and I had three and a half years to research and treat the objects. In some ways we only touched the tip of the iceberg, but it’s time to move on.

Did you have notes from earlier restorations?

We had limited information on the 19th-century restorations, but pieced together what we could. The French curators, Mathilde Avisseau-Broustet and Cecile Colonna, provided records from the 1960s and 1980s—much of it in French, which we translated with help from Google and some fluent interns. A few of the better-known vessels had been published in art historical and scientific journals.

Does your work end after the objects are on exhibit?

I visit the objects periodically to see how they’re doing and how visitors respond to them. The exhibition has been well received. We followed best conservation practices; all the objects have a protective coating and display cases to minimize pollutants. They arrived in crates sufficient for a one-time trip overseas, but for years of travel around the US, our team constructed environmentally protective boxes; every fragment has a well-sealed container. Either Eduardo or I will accompany the objects to each venue to help mount their exhibitions.

What else would you like to tell us about the exhibit?

I would like to thank the extraordinary team of dedicated professionals who helped the project succeed—from the art movers, registrars, designers, photographers, conservators, packing team, scientists, writers, editors, curators, educators, colleagues at other institutions, web designers, interns, and communications staff. And to our incredible curators—Kenneth Lapatin, Mathilde Avisseau-Broustet, and Cecile Colonna—who trusted our judgment and supported our conservation choices for these unique artifacts.

Read our article about this exhibit, and curator Ken Lapatin’s thoughts on the silver pieces, in the September Perspectives.