Beyond our Borders: Sharing the Undocumented Past with the Public

By now, two full years into graduate training and with two research summers under my belt, I have conducted a good number of oral histories. All are challenging in their own way, but the most emotionally challenging by far has been the one I conducted with my father this past summer. Though he is now an elderly US citizen—he became naturalized at the age of 70 when I was deployed overseas because he thought that if his son was serving this country, he ought to pledge allegiance to it too—he was undocumented for decades, and stories of brutality, pain, and even death abound in his testimony. Nothing hit me, though, like what he had to say about his experiences with the border patrol.

Stranded and homeless immigrants living near the US-Mexico border. Picture taken during a research trip in the summer of 2014.

I expected to hear horror stories about his encounters with la migra, but nothing of the sort emerged from our conversation. In fact, his memories of the green-and-white-clad men are bittersweet and not just bitter, often stories of being saved from certain death by a border patrol agent. A slightly different story hit an emotional nerve for me, however. He told me about one time when a raid resulted in his arrest and subsequent deportation. Nothing was particularly striking about this one instance, one of many times he was deported—“I’ve lost count of the times I was sent back,” he said—until the agent in charge led him across the border, back to Mexico. “He looked at me with compassion,” my father said, “gave me a big hug, and told me, ‘I hope you can fix your papers soon so you never have to go through this again.’” This was a story of the sort that makes history so powerful for me, so viscerally human.

There were other, more troubling stories, of course—episodes of inhumanity, carelessness, and negligence committed by border agents. But most immigrants don’t have much negative to say about the border patrol, and often say that they understood they “were simply doing their job.” Many times, immigrants remember thinking of the border patrol simultaneously with fear and gratitude, with anger and relief. They were hunters, cold representatives of an unjust system; they were saviors in the desert, bringing aid when death was nearly certain. They were careless and negligent people who caused tremendous suffering; they were reluctant enforcers of a line they recognized as artificial.

Revelations like these constantly remind historians that we do not always find what we expect to find. Indeed, historical work constantly subverts our expectations. One thing I have learned to always expect, however, is finding glimpses of humanity even in the darkest of episodes. These glimpses, like the border patrol agent who was touched by his captive’s pain, remind us that studying the past—and using various source bases—can help illuminate the tremendous complexity of historical and contemporary questions. As historians, we use these anecdotes to make claims and arguments about the past, but we also often treat them as more than academic exercises. We hope to engage with the public, and to tell stories and ask questions that contribute to more informed, more civil, and more empathetic public debates. 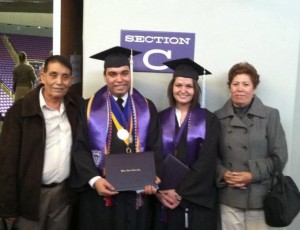 Eladio Bobadilla, with his parents, Benjamin and Lucina , and his wife, Timaree, at the couple’s graduation from Weber State University in 2012.

This blog series, of which I was honored to be a part, is but one example of how social media and the Internet can help us do that—to reach beyond academic circles. For allowing me to make a small contribution to this effort, I am truly grateful to the American Historical Association. This has been a wonderful opportunity to showcase a bit of my work, to explain some of the things I do as a historian, and to hear from people in the profession as well as those outside academia who crave learning about the past, the people who will no doubt keep history alive and relevant for generations to come.