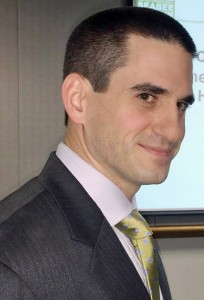 Frank A Blazich Jr. is a historian at the Naval History and Heritage Command, Washington Navy Yard, and a volunteer chief historian at the Civil Air Patrol National Headquarters, Maxwell Air Force Base. He lives in Washington, DC, and has been a member since 2010.

My late father provided the inspiration for my pursuit of history. A draftee and disabled combat veteran of the Vietnam War, my father went on to earn his doctorate in horticultural science and a distinguished 33-year career in academia. When home away from his laboratory, history filled his spare time. From collecting artifacts to building his library to traveling to museums and historic sites, I joined him on this journey at a young age. A love of history became a common bond between us and something which constantly brought us together. While passions over subject matter produced a few heated discussions, nary a week went by when we did not discuss a book, article, or something he found on eBay and had to have. The pursuit of history as a career became preordained, a subconscious movement shared by father and son.

On a professional level, I am writing a book on the history of the US Sixth Fleet, a chronology of the US Navy in World War I, and finalizing edits for a retired colleague on antisubmarine warfare from World War II to the mid-1950s. For my volunteer history, I am researching and writing an article reexamining the World War II claims of the Civil Air Patrol’s coastal patrol service, developing a chronology for the corporation’s 75th anniversary, and overseeing the establishment of a formal archive and storage facility for the corporation’s records and artifacts. At home with my remaining free time, I am finalizing the publication of an edited World War II prisoner of war memoir, revising my dissertation for submission to an interested university press, drafting a few book reviews, and trying to keep all my disparate topics organized with what little time remains!

They have evolved rather than changed. I tend to gravitate to ignored topics or those which I stumble on in the course of research for a different project.

One of the most impressive works I have read of late is Adam Tooze’s Wages of Destruction: The Making and Breaking of the Nazi Economy.Even if military history is not of interest, the book’s quality of research, rich analysis, and meticulous dismantling of the mythology surrounding the Third Reich make it a masterpiece of the historian’s craft.

The varied research topics of myself and the profession provide a kaleidoscopic perspective on past and present which constantly stimulates my mind and soul.

As a public historian, I am grateful for the efforts of the AHA to protect funding for public history initiatives and public education nationwide. Furthermore, the American Historical Review and Perspectives always bring to my attention the latest scholarship and developments in the field which I might otherwise have missed in the course of my own projects.

All my other passions are rooted in history! Two areas which I greatly enjoy are collecting and restoring antique phonographs from the early twentieth century and gardening. The latter stems from my parents but I find a day working out in the yard or immersed in nature to be rejuvenating to the spirit. As to the former, there is something wondrous in restoring a century’s old mechanical device and bringing forth the sounds of a bygone era.