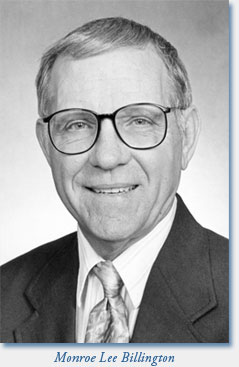 His books include Thomas P. Gore: The Blind Senator from Oklahoma (1967), The American South: A Brief History (1971), The Political South in the Twentieth Century (1975), Southern Politics since the Civil War (1984), and New Mexico's Buffalo Soldiers, 1866–1900 (1991). He published 15 books and more than 80 articles, reviews, essays, and chapters on a wide range of topics including agriculture, religion, segregation, and politics. Billington was a generous professor committed to his students, his colleagues, his community through Rotary and other organizations, and to the teaching of history. He is survived by his wife Wilma, his children Marion, Mari, and Melinda, and his stepchildren Randall, Richard, Rosemary, and Ruthann. Donations can be made to the Monroe Billington Award in the history department at New Mexico State University.