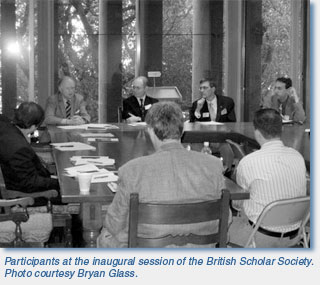 The British Scholar Society, a new society composed of scholars with an interest in British history from a global perspective was launched in fall 2007 with an inaugural conference at the Harry Ransom Center on the campus of the University of Texas at Austin. This marked the first face-to-face meeting of the society. Martin Wiener of Rice University delivered the inaugural address. The next conference will be held in affiliation with British Studies at the University of Texas at Austin on 20–21 of February 2009. Linda Colley, from Princeton University, will be the 2009 keynote speaker. The location of the annual meeting in Austin has been a tremendous resource. Between British Studies and the Department of History, the University of Texas constitutes the largest center for the study of Britain and the British Empire outside the United Kingdom.

The British Scholar Society hopes to serve the global academic community with its annual conference, journal, and web site (www.britishscholar.org). At the moment, most British history societies are still limited by nationality in membership and scope. The increased global interconnections of the academic world—including the international job market—make it necessary to cultivate a global community.

The British Scholar Society draws its members from every part of the world. It also fosters a sense of a close-knit community by emphasizing the "society" part of its name. Organizers of the first conference made a special effort to create an environment where attendees would have the opportunity to meet each other personally and discuss ideas informally at gatherings in local coffeeshops, restaurants, and pubs, including dinner with live classical music (and some period costumes) at the home of the founding member and general editor, Bryan Glass.

The society also publishes the British Scholar Journal. The journal will be published bi-annually on archival quality acid free paper and will be available free online for non-subscribers after a six month waiting period. Institutions and individuals in developing nations will be given free online access without the waiting period in order to foster a global community of scholars interested in modern British history. Headed by Wm. Roger Louis, past president of the AHA, the advisory board for the journal includes Jeremy Black, Terri Givens, Jose Harris, A. G. Hopkins, Kevin Kenny, Brian Levack, Philippa Levine, P. J. Marshall, David McIntyre, Gail Minault, and Kenneth Morgan. The journal is publishing its first volume in September, and it will feature articles focusing on the global dimensions of British history since 1688. Gregory Barton, a historian of environmental and imperial history, is the editor.

The society is also planning on launching a book series to publish monographs and anthologies on Britain and the world. British Scholar Journal's Associate Editor James Onley, director of the Gulf Studies Program at the University of Exeter, will share editorial responsibilities for the book series with Gregory Barton. Negotiations are currently under way with an academic publisher to launch one or more new volumes per year.

The society's web site features book reviews of recent publications, a free monthly newsletter with information about the activities of the society, details about the journal, and interviews with British historians. These monthly interviews include discussions of new directions in British history, personal biographies of historians, and anecdotes and advice for students and professors.

—Brett Bennett is a PhD student in history at the University of Texas at Austin.