An Unlikely Source of Local Policy Knowledge, History Undergraduates Take the Lead with a Unique Curriculum

Editor’s Note: A version of this essay was previously published at the National History Center blog.

On a May night in downtown York, Pennsylvania, two blocks from City Hall, I sat quietly as seven of my York College of Pennsylvania undergraduate students addressed politicians and community leaders on the histories of poverty in our community and of past policy responses that had attempted (and often failed) to alleviate this deep-rooted problem. Speaking for 90 minutes on subtopics they had researched over the course of a semester, these students together unfolded several key facets of the history of poverty policy in York. The audience responded with rapt attention, as student research informed and energized attendees, including the mayor, the city council president, the local constituent services director for the area’s US representative, and the CEO of York County’s official Community Action Agency. Following their prepared remarks, students handled difficult, thought-provoking audience questions with comfort and skill. Each student stood a little taller later that night as they mingled with local policy makers and college faculty. In the process, they celebrated their hard work—work that might tangibly contribute to a community in which they now felt increasingly invested. 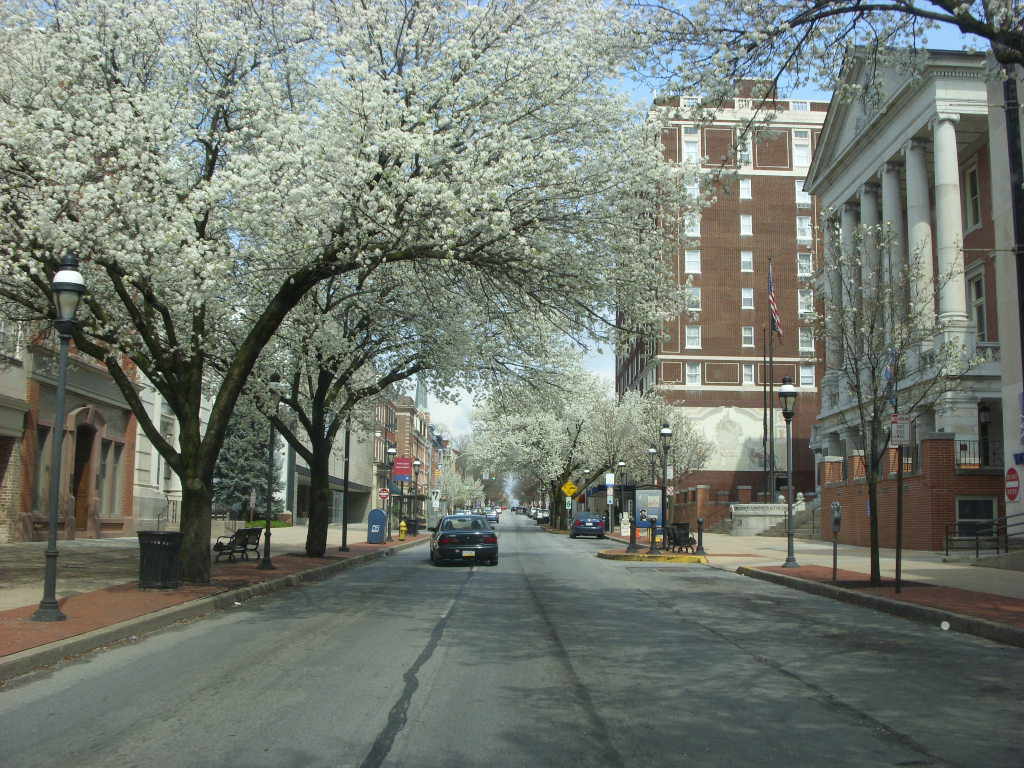 York’s diversity, community spirit, and public and philanthropic support are encouraging revitalization and community-building efforts too, and many of these are tied directly to understanding and facing York’s past. Doug Kerr/Wikimedia Commons/CC BY-SA 2.0

The group had traveled quite a distance from our first meeting in January. At the outset, the students had little idea where they would direct their energies and widely varying experiences with history research, policy analysis, and local community engagement. Guiding these students from that starting point to the final briefing event was perhaps the most demanding and fulfilling teaching experience of my nine years at York College. In this new Policy and History in York course, modeled on the National History Center’s congressional briefings, I challenged students to conduct the research necessary to become experts on the history of federal, state, and local policies that have affected our community. Then they would work as a team to build and present a shared briefing for local decision makers.

I conceived of this course for two main reasons. The first was in response to the all too ubiquitous questioning, including in higher education itself, of the relevance of historical research. Here was a course in which students would show peers, faculty, and the broader community how historical research could be brought to bear to contextualize current challenges.

Another impetus was York College’s growing commitment to integrating student learning with community engagement. The main campus sits one and a half miles south of its new downtown Center for Community Engagement, with most academic and residential buildings just over the city line on the former grounds of a suburban country club. For many years, York College, and the majority of its student body, was deeply disconnected from the nearby urban center. A majority–minority deindustrialized city (one where a majority of residents now are from minority populations) with a rising poverty rate thrice the national average, York City sits at the center of a county along the Mason-Dixon line, about 50 miles north of Baltimore and 100 miles west of Philadelphia. With about 45,000 residents, York houses about one-tenth of the county’s population but more than one-third of its poor. Like in so many larger, better-known Rust Belt communities, the city is still struggling to confront the ongoing legacies of a difficult history of racism, job loss, and disinvestment. But York’s diversity, community spirit, and public and philanthropic support are encouraging revitalization and community-building efforts too, and many of these are tied directly to understanding and facing York’s past. I want my students and myself to be part of that process, and I was fortunate to be able to draw upon the resources and energies of the college’s aforementioned community engagement center and affiliated Arthur J. Glatfelter Institute for Public Policy, both of which embody a recently revised college mission to embrace community partnerships.

Guiding these students was perhaps the most demanding and fulfilling teaching experience of my nine years at York College.

To best pursue these learning outcomes, I designed my new course entirely around the historical policy briefing as the final product (unlike some examples elsewhere in which the policy briefing concept has been built into existing courses). The course was cross-listed in political science (which was facilitated by my multidisciplinary Department of History and Political Science) and attracted a mix of junior and senior history and political science majors, plus a few others. The rigor of the class and its unfamiliar format meant that only seven students remained by semester’s end. This small class size ultimately offered opportunity, though. Even as it reduced the range of material their research could cover, it became logistically feasible for all seven students to publicly present their own original research at the final briefing.

At the start of the course, students had little notion of what to expect. They began learning the local history of York through a series of short journal articles published by the local historical society. They then explored policy challenges facing York today by hearing from community stakeholders representing local institutions such as the YWCA, NAACP, County Planning Commission, and Pennsylvania Immigrant Resource Center. A majority of the class was most interested in a presentation by the CEO of the York Community Progress Council, the War on Poverty–era Community Action Program that remains the central federal poverty-fighting agency in the county. After her presentation, the students voted to focus on the local history of policies designed to address poverty. Their individual research projects analyzed the long history of the county almshouse, the local politics of national minimum wage policy, housing discrimination, the history of community welfare organizations like the United Way and the Community Action Programs initiated under the War on Poverty, educational inequalities, the local course of deindustrialization, and the demographics and geography of poverty within specific census tracts over the last half century.

Students often found conducting such research challenging. Many initially gravitated toward more readily accessible national source material. But through a combination of their own dedication and regular coaching from me and each other, students identified an array of locally relevant primary sources, including archival sources at the York History Center’s library and at the York County Archives, repositories of local organizational records, published books, census data, archived web pages recording policy stances of prominent local politicians, congressional sources documenting the actions of York County’s federal representatives, and especially historical York newspaper sources. With this research, students each wrote a research paper from which they drew in crafting their presentations.

Students in the course gained hands-on experience in primary research, preparing and presenting a professional briefing, and engaging the community where they live and learn.

Over the course of a month, the students and I worked together to revise their fifteen-minute presentations into a focused, cohesive hour-long briefing in which each student spoke for six to ten minutes. This was an arduous and sometimes tense process, as students rehearsed full presentations three times in front their peers, with three rounds of substantial revisions. When the evening of the briefing arrived, students were eager and anxious, but their preparation shone through, and each rose to the challenge to offer their best work yet. The result was the tremendous success described above. One student reflected that the stakeholders’ enthusiastic response, including numerous requests for copies of the presentation slides, confirmed that the students had achieved their goals in researching, packaging, and disseminating relevant history for local policy leaders.

This course was an invaluable learning experience that I look forward to repeating. Though it was certainly more work to execute than a standard upper-level history course, I received immense, and necessary, support from my institution, especially from the college’s Center for Community Engagement and its dean, Dr. Dominic DelliCarpini, who advocated for a critical one-course reduction from my normal four-course teaching load and provided financial resources, physical space, critical guidance, and help connecting with local policy makers, NGO directors, businesspeople, educators, and philanthropists. I would be happy to communicate with faculty who hope to develop or adapt similar courses at other institutions that will support this kind of student-led history research–based community engagement.

At the upcoming American Historical Association annual meeting, I am excited that two students from the class will be joining me for a workshop titled “Teaching History’s Relevance to Policy: Applying the History and Policy Education Program to the Classroom and the Community.” York College senior Jordan King and 2019 graduate Cody Little will share their research and perspectives on the course. Together the three of us will reflect upon the benefits and challenges of this kind of community-oriented, project-based learning. We will also consider ways future iterations of the course might be improved. Our hope is that attendees interested in implementing a similar course at their institutions can learn from our experiences as instructor and students.

Not only did this opportunity stimulate my creativity as a teacher and historian; more importantly, students in the course gained hands-on experience conceptualizing and conducting purposeful primary research, preparing and presenting a professional briefing, and engaging the community where they live and learn. In the process, they illuminated lessons from York’s past to help local policymakers better understand and grapple with the challenges of its present.

Corey M. Brooks, associate professor of history at York College of Pennsylvania, is the author of Liberty Power: Antislavery Third Parties and the Transformation of American Politics. He taught Policy and History in York in the spring 2019 semester.