Historian of US labor and social history 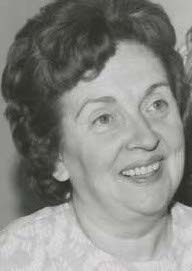 Elizabeth “Betty” Balanoff, professor emerita of history at Roosevelt University, died after a long illness on May 28, 2019, in Chicago. She was 92. Born in the small town of Salisbury, Missouri, to Adelaide and Harold Brummall, she studied biology as a pre-med student at the University of Missouri, transferring to the University of Chicago in 1945 to pursue a growing interest in the social sciences. In 1947, she volunteered for the aldermanic campaign of James Balanoff Jr. She married him, thus becoming connected to a family well known for progressive activism in the Midwest. James was a steelworker who served as president of Local 1010 of the United Steelworkers, her son Thomas is president of Local 1 of the Service Employees International Union Illinois Council, and her sister-in-law Miriam Balanoff served as a state legislator and judge. Their activism informed her contributions to the history of the American labor movement.

While raising four young children, Balanoff worked part-time until 1963 as a market research interviewer. She lived in Gary and Hammond, Indiana, for most of her adult life, but commuted to Chicago to pursue a master’s degree in history at Roosevelt University, earning her degree in 1964. She then returned to the University of Chicago for a PhD, where she studied with John Hope Franklin, and wrote her dissertation on the history of African Americans in Gary. Her doctorate was awarded in 1974.

In 1966, she began a long career at Roosevelt University, starting as an adjunct instructor and then moving to a full-time position as an assistant professor; she was promoted to full professor in 1981. For 25 years, she taught American history to generations of students, many of whom later became accomplished historians. She was a pioneer in the teaching of African American history, Native American history, women’s history, immigration history, and labor history. She also taught the first courses at Roosevelt in the history of childhood and the family; her class in labor history was the first open to undergraduates at a Chicago university. In 1976, she participated in a faculty exchange, lecturing at trade union colleges in Moscow and Leningrad. She was a kind, generous, and accomplished teacher.

Balanoff is best known for the Labor Oral History Project. Initially funded by an NEH grant, the endeavor saw her interviewing over 70 labor leaders and rank-and-file union members from 1970 to 1985, creating a valuable resource that is among the most requested items in the Roosevelt University archives. Among those interviewed were Mollie Levitas of the Chicago Federation of Labor, Lillian Herstein of the Chicago Teachers Union, Addie Wyatt of the United Food and Commercial Workers, and Irving Abrams and Fred Thompson of the Industrial Workers of the World. The Illinois State Library funded a project in 2001 to digitize the transcripts, which are now available online.

Balanoff’s interviews have been cited in numerous books and articles on labor history. She also presented workshops on oral history methods to groups such as the Society of American Archivists and the Western Association of Women’s Historians, and at many other professional associations, colleges and universities, and public libraries. Her pioneering work preserving the stories of labor union activists was recognized with awards from the Working Women’s History Project and the Illinois Labor History Society.

Betty Balanoff advocated for social justice throughout her life. She supported the Civil Rights Movement and worked for the election of Richard Hatcher, the first African American mayor of Gary. After retiring in 1991, she pursued another of her passions, environmental justice. She cofounded the Coalition for a Clean Environment in Northwest Indiana and was a leader of Northwest Indiana Residents for Clean Air. She also served on the Hammond Public Library Board for seven years.

She is survived by four children, seven grandchildren, and nine great-grandchildren. Roosevelt University has established a teaching award in her name.