Born in the late 1830s as Terminus, the end point of the Western & Atlantic Railroad, Atlanta was built on a heritage of industry, growing into a modern city of the New South. Our most famous exports are CNN, Coca-Cola, Martin Luther King Jr., and (perhaps awkwardly) Gone with the Wind—almost all of which have more resonance and cachet outside the United States than they do within. While the city’s website makes the dubious claim that “Die-hard southerners view Atlanta as the heart of the old Confederacy,” on the whole Atlanta looks to the future.

The city’s 19th-century history is not well represented by Gone with the Wind, though the novel’s influence on the popular imagination remains strong. By the Civil War, Atlanta’s population was almost 10,000, making it an important transportation and commercial hub. So important was Atlanta that General William T. Sherman considered its capture the key to victory, both for the United States army and for Abraham Lincoln, who was locked in a fierce reelection campaign in the summer and fall of 1864. Having been dealt consecutive blows by retreating Confederate troops, then by Sherman, the city bounced back after the war by rebuilding its railroad. In 1868 the capital of Georgia moved from Milledgeville to Atlanta. In 1887, Atlanta adopted the phoenix as its symbol and Resurgens as its motto. 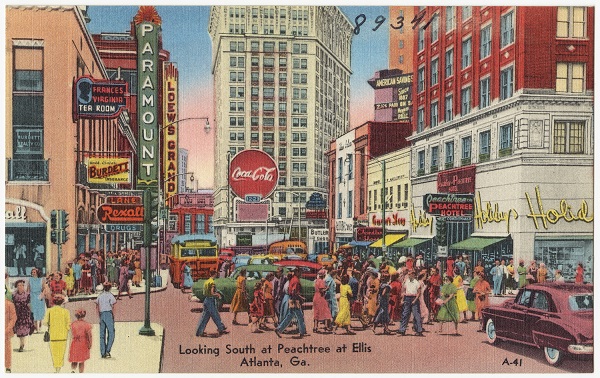 Cracks sometimes have appeared in the city’s shiny veneer, despite the best efforts of 19th- and 20th-century boosters. A horrific race riot in 1906 made national and international headlines, yet white city leaders continued to promote Atlanta to businesses as the Gate City to the South, as did a successful 1920s nationwide advertising campaign, “Forward Atlanta.” But as Atlanta grew, segregation increased. On the city’s west side, the historically black colleges of the Atlanta University Center became the intellectual center of the African American community, while on the east side, Auburn Avenue, described by Fortune magazine in 1956 as the “richest Negro street in the world,” became a commercial, cultural, and religious epicenter. White residents clustered on the north side of the city and eventually, by midcentury, migrated in droves to the suburbs. The legacy of Jim Crow has proven hard to erase in Atlanta, which today remains one of the most segregated cities in the country.

Nevertheless, Atlanta was a beacon during the early civil rights movement. It was longtime mayor William Hartsfield (in office 1937–41 and 1942–61) who famously promoted Atlanta as “the city too busy to hate.” The slogan might not have rung true for all Atlantans, but Hartsfield did oversee the relatively quiet integration of Atlanta’s public school system in 1961. If Hartsfield’s name is familiar outside of Georgia, it is probably because he also had the vision that resulted in the construction of Hartsfield-Jackson International Airport, today the world’s busiest. As we often say, when you die, it doesn’t matter if you’re going to heaven or hell—you’re going to pass through Hartsfield-Jackson.

Since the 1980s, when the Atlanta Olympic Committee was preparing its marketing campaign to win hosting honors for the 1996 Olympic Games, city leaders have framed it as “a miracle modern city,” in the words of then-mayor Maynard Jackson. Mention of the city’s 19th-century history was scrubbed in favor of representing it as home base of the civil rights movement and a wonderland of gleaming skyscrapers. Today, much of the Olympic infrastructure has been repurposed—Centennial Olympic Park has become Atlanta’s tourist epicenter, fringed with such attractions as the World of ­Coca-Cola, Georgia Aquarium, CNN Center, College Football Hall of Fame, and Center for Civil and Human Rights. In late 2014, the park was connected to the Martin Luther King National Historic Site on Auburn Avenue via the Atlanta Streetcar.

Atlanta adopted a preservation ordinance rather late (in the 1980s) and as a consequence lost vast quantities of its historic fabric—a fact locals often bemoan. A reporter for the weekly newspaper Creative Loafing once said that Atlanta should be called “the city too busy to leave a building standing for more than 25 years.” But it is a city of hidden gems, such as Inman Park, a late 19th-century neighborhood that went into decline in the mid-20th century before being revitalized as one of the city’s most beautiful and interesting communities, and Cabbagetown, an industrial area formerly home to the Fulton Bag and Cotton Mill, now one of the nation’s largest loft developments and a vibrant residential area. Atlanta is, ultimately, a city of neighborhoods, and thanks to the vision of a graduate student from Georgia Tech, Ryan Gravel, and the commitment of the city’s leaders, many of those neighborhoods are now being linked, by the BeltLine, into the “most comprehensive transportation and economic development effort ever undertaken in the city of Atlanta” and among “most wide-ranging urban redevelopment programs” in the country, as its website boasts. The BeltLine, a redevelopment of a historic 22-mile railroad corridor that encircles the city, will connect 45 in-town neighborhoods through rail transit and multiuse paths, including parks and green spaces.

Since its founding in 1837 as the endpoint of a railroad, Atlanta has defied expectations. The Atlanta metro area is now home to almost 5.5 million people spread out over 6,000 square miles in 28 counties. It is the economic engine of Georgia and much of the Southeast. My hope is that attendees of the 2016 annual meeting will all get a chance to explore the city beyond the meeting hotels. But in case you do not get to venture far afield, take comfort in knowing that, unlike in 2007, when the AHA was last in Atlanta, you can now travel between the Hilton, the Marriott, and the Hyatt by skybridge, avoiding traffic on Courtland Street.