I just arrived in Germany for a short research trip about the regulation of family migration in West Germany. While I review West German attempts to curb migration from Turkey in the early 1980s, history gallops on outside of the archives. Angela Merkel visited Turkey this weekend in order to discuss how to tighten border controls; Henriette Reker was elected the first female mayor of Cologne on Sunday after being stabbed because of her pro-refugee stance on Saturday; and on an everyday level, local municipalities are struggling to process the new arrivals, relying on the volunteer labor of both Germans and refugees to create shelter and stability. 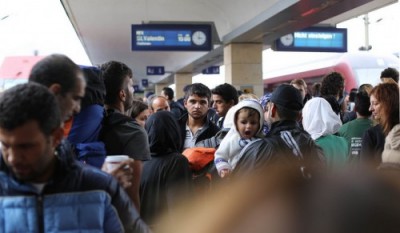 Refugees wait to catch a train in Vienna. By Josh Zakary on Flickr. CC BY-NC 2.0

The German situation is only one piece of a global problem. According to the UN Refugee Agency, 59.5 million people (1 in 122) are currently displaced or forced migrants in 2015. Over 51% of these refugees are children under 18. These numbers have been rising continually since 2011, but 2015 is the highest level ever recorded. Although the conflict in Syria is currently creating the most refugees (with Turkey hosting most of them), there are refugees on every continent.

With those figures in mind, it’s fitting that the 2016 annual meeting of the American Historical Association should be themed around “Global Migrations: Empires, Nations, and Neighbors.” In fact, media reports have often drawn direct parallels between the humanitarian crisis of World War II and today and have acknowledged that history can provide invaluable perspective on the current crisis.

At the AHA, two sessions will shed light on a frequently made historical analogy by reconsidering the situation of forced migrants after World War II: “Forced Migrations in Comparative Context” offers four case studies of displacement in the immediate postwar period, while “Zionism and Jewish DP Politics in the Aftermath of the Holocaust” looks at how Jewish displaced persons adapted existing political traditions in response to the experience of displacement. 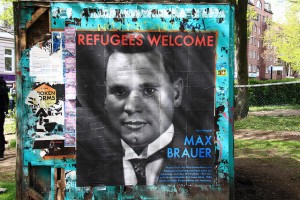 In Hamburg, a “refugees welcome” poster invokes historical memory: Max Brauer was a Social Democrat who was forced to flee Nazi Germany, he returned in 1946 and was elected the first mayor of Hamburg. By Rasande Tyskar on Flickr. CC BY-NC 2.0

Although World War II and its immediate aftermath offer a powerful template through which to think about the current crisis, historians would do well to cast a wide net both temporally and geographically. Because most countries require asylum seekers to prove that they are “political” refugees in order to be granted asylum, we might be interested in questions of how different kinds of movement are categorized. How will states cope with displacement caused by climate change, creating “environmental refugees”? How do some kinds of movement come to be deemed in need of humanitarian aid, while other kinds of movement become stigmatized? Certain sessions will seek to provide historical context for these questions. “Fellow-Feeling in an Imperial Age” will consider how humanitarian priorities developed in the British empire, while “Mobile Subjects and the Transformation of Law and Space Across 18th- and 19th-Century Eurasia” will offer perspectives on how a variety of imperial states re-conceptualized sovereignty and citizenship in response to long-distance migrations.

European leaders held an emergency summit about the refugee crisis on Sunday. Since Hungary and Croatia closed their borders, over 60,000 refugees have entered Slovenia—a country of only 2 million. Slovenian Prime Minister Miro Cerar warned that the European Union “will start falling apart” without a swift solution. Refugees will continue to arrive on the eastern borders of Europe—but a century of forced migrations and ethnic cleansing has made eastern European states unprecedentedly ethnically homogeneous, creating questions about whether they can welcome new arrivals. Which lessons from the past are ultimately going to be most helpful for creating a more humane future? The 2016 annual meeting will offer historians many chances to debate that question. 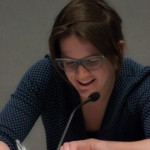 Lauren Stokes (@laurenstokes) is a PhD candidate at the University of Chicago, where she is completing a dissertation about family migration in West Germany. She will be presenting at the 2016 meeting on the panel “Between the Family and the Global: Managing Population Migration to Western Europe in an Age of Globalization, 1945–90.”