In early 1867, freedman Peter Price returned to the North Carolina plantation where he had worked the previous year. It was time to collect his share of the proceeds from the year’s crop, which had just been sold. But the landlord refused to pay him for his labor, saying that he would see “Hilly Brand further in Hell than a Jay Bird could fly before [he] should have the crop.” Price then walked to the nearest army post, in Greensboro, about 15 miles distant, where he met with detached US army officer Hugo Hillebrandt. Hillebrandt issued an order that Price be paid. Price walked back to Piedmont and was again refused. He turned around and began another long trek to Greensboro.

In the Reconstruction South, it was frequently the army that upheld newly freed people’s rights. But where was the army, how much of the South could it access, and did it have the power to uphold emancipation in more remote areas? With their recently published digital project, Mapping Occupation, Gregory P. Downs (UC Davis) and Scott Nesbit (Univ. of Georgia) seek to answer these questions. The project, accessible at mappingoccupation.org, offers a new way to view and teach Reconstruction.

Built in mapping platform ArcGIS, the project analyzes data from thousands of military records documenting the locations of army posts in former Confederate states between May 1865 and December 1880. A US map displays data points that include the number of infantrymen, cavalrymen, and African American troops. With formerly enslaved men and women eager to claim their rights but ex-Confederates reluctant to grant them, freedom was only as effective as it could be enforced, which depended heavily on the presence of the US army. Mapping Occupation shows where armed enforcement could take place.

But how does the scholar go about shaping an effective digital mapping project? In an interview, Downs and Nesbit shared details of their experience building Mapping Occupation.

For many years, discourse on Reconstruction emphasized the weakness of occupation. Downs wanted to analyze occupation policy and its social repercussions, but he realized that the basic data on army presence in former Confederate states did not exist. He plunged into the National Archives, sifting through boxes of army records. After compiling a prodigious Excel spreadsheet of outpost data, it occurred to him that “the premise that there was no occupation might be in doubt.” With the data showing a considerable army presence in the Reconstruction South, he knew he had to argue for its significance.

But what to do with all the data? It couldn’t go in Downs’s resulting book, After Appomattox (2015)—it was simply too large. But in summer 2011, about a year into work on the book, historian Ed Ayers put Downs in touch with Scott Nesbit. A veteran of digital history, Nesbit had worked on the pioneering Valley of the Shadow project (1993–2007) as a graduate assistant and was then immersed in his own project, Visualizing Emancipation. Both historians wanted to investigate occupation on the level at which freedpeople interacted with army officers. As Nesbit said, “What happens when you’ve got a stable army presence that starts to change people’s expectations of what the power dynamics are and how [does that shape] what people think these new rights emerging about freedom mean?” With these questions in mind, the two turned to the spreadsheet.

With Downs’s intimate knowledge of the data, Nesbit’s experience in digital collaborative projects, and a development and design team that included a graduate student in landscape architecture and about five people from the University of Georgia’s Information Technology Outreach Services, Downs and Nesbit began considering what data to include and how to present it. With so much information about the posts and a limited capacity to display it clearly on a map, they focused on elements that directly impacted the “zones of occupation” (areas the army could travel to in order to address offenses) and “zones of access” (areas within which freedpeople could travel to bring complaints). The presence of cavalry, for instance, was vital in extending the reach of the army. Downs and Nesbit also included numbers of black troops, noting that for many years historians have underestimated black troops’ involvement in Reconstruction in the interior South. 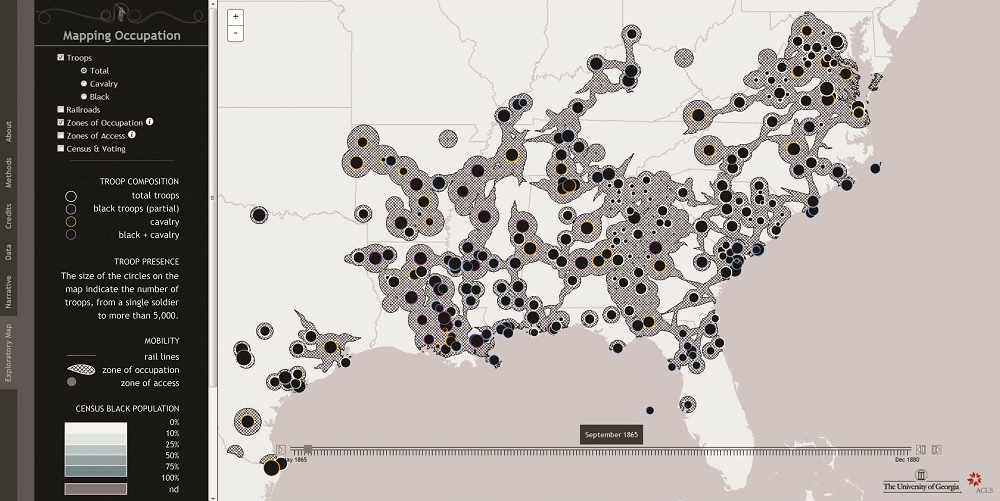 “This map is the start of interpretation and not an end to it,” Nesbit emphasized. The many variables from location to location invite questions about Reconstruction on increasingly smaller scales. What was whites’ level of hostility to troops? How many people actually were able to travel to these bases? How was women’s experience of occupation different? Did marauders frequent the area, making it dangerous for troops to address complaints? To return to the account of Peter Price, officer Hillebrandt had insufficient troops to accompany him back to the plantation, for soldiers had been murdered on the road he would have needed to travel. “It illustrates the kind of complaints people have, the centrality of force to what they’re asking, and the complexity of delivering that force,” Downs said. This is where Downs and Nesbit hope their project can be a springboard for new research. Each data point has its own history, and instructors could design assignments in which students could look at reports of specific outrages against formerly enslaved people (such as theft, assault, or rape) to test a location’s access to the army and the effectiveness of local troops in upholding people’s rights.

The Value of Mapping Occupation

“Nobody in the field had any idea of where the soldiers were, or really had only the vaguest sense of how many were out there,” Nesbit reflected when asked about the project’s contribution to Reconstruction scholarship. “It’s really helpful to know where the federal government had outposts of power and where it did not.” And as Downs suggested, each data point on Mapping Occupation represents a zone where the notion of what it meant to be free was being worked out. Even after the end of the Civil War, freedpeople were frequently victims of physical violence or murder, and some were still being held as slaves. Freedpeople brought complaints of these offenses directly to army posts. Downs enumerated some: “Am I free if I’m getting whipped?” “Am I free if I’m not being paid my wages?” “Am I free if they still say I need a pass?”

Downs noted that Congress would try to address such questions in the Civil Rights Act of 1866 and in the Fourteenth Amendment but that in the meantime army officers were encountering these issues on the local level, and their reports to Washington helped prompt legislation. “Many people look at Reconstruction from the perspective of Washington and policy,” he explains. “Others look at it from a grassroots perspective. But the military presence is where these two sync up.” Mapping Occupation brings this space to the fore, enabling scholars to see where conversations about what it meant to be free took place.