On Hamilton and Learning to Think Historically

The premise of Hamilton: An American Musical sounds a bit like a desperate high school history teacher’s last-ditch effort to engage apathetic teens: a hip-hop musical telling the story of Alexander Hamilton, one of the less iconic founding fathers. 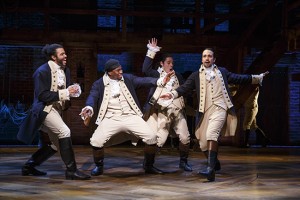 In fact, history teachers and their students should be front-row at Hamilton. Not only is it an innovative and impressive stage production, it demonstrates a way to engage with history thoughtfully and creatively.

Consistently glowing reviews have praised Hamilton for its blend of musical styles (the whole performance is sung in a combination of rap, hip-hop, and classic show tunes) and its diverse cast. The media frenzy has only increased since writer and star Lin-Manuel Miranda won a MacArthur “genius grant.” But Hamilton deserves to be analyzed more closely through the lens of its most obvious theme: history.

Hamilton is a bio-musical grounded in a commitment to historical accuracy: it is based on the Pulitzer Prize-winning biography by Ron Chernow, who was subsequently brought on as a historical advisor during the show’s production. It tells the story of Alexander Hamilton’s life from the moment he arrived in the United States as a young man until his death following a duel with his longtime adversary Aaron Burr. All this is set against the backdrop of the founding of the United States. Flattened in the public imagination by countless identical retellings, this origin story’s familiarity allows Miranda to add details and nuance in ways that play with the idea of historiography, asking where our history comes from, who gets to tell it, and why.

Hamilton constantly gestures towards the events left out of the history. Burr’s rapped narration lets details sneak in—about the early two party system, or the plan by John Laurens to enlist a regiment of slaves in return for their freedom—that hint at the many directions a historical narrative could take. The particular narrative that Miranda presents also illustrates how history can be shaded depending on who is doing the telling. For instance, Hamilton portrays Thomas Jefferson as pompous, cocky, and a bit of a bully, an interpretation that will surprise those who know only a revered Jefferson. Hamilton’s obvious theatricality also suggests that it is not an objective view of the proceedings of a man’s life. Its gaudy costumes and mix of musical styles and vernaculars, some of which are decidedly anachronistic, are all reminders that history is sifted through the priorities of those who tell it—a process that lands some stories in textbooks and leaves others out. 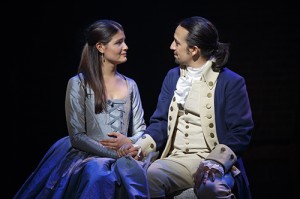 However, interpretations are only as good as the sources in which they are grounded. Documents and written records are crucial in Hamilton’s plot, as Hamilton’s words establish him as a fixture in the early Republic’s political landscape. Hamilton’s copious writings are referenced in the musical’s lyrics, and his quill and desk return throughout the play as motifs that foreground the importance of these primary sources. It’s worth noting that The New-York Historical Society has a special exhibition on view through November 29 that includes original copies of some of the documents referenced throughout Hamilton, including a letter written by Hamilton while he served as George Washington’s aide-de-camp during the American Revolution and a letter to Hamilton’s then-fiancée, Elizabeth Schuyler.

Yet Hamilton shows how historians’ reliance on documents can make telling history precarious. In a pivotal scene after Hamilton has betrayed his wife, Elizabeth (called by her nickname Eliza throughout the play), she burns the letters he has written to her over the years. It’s an imagined scene that nonetheless demonstrates powerfully how fragile the historical record can be. She sings, “Let future historians wonder how Eliza reacted when you broke her heart,” deliberately asserting her agency over what is remembered. Miranda ends the production with Eliza, too. The cast joins in song to explain that after Hamilton’s death it was Eliza who collected his papers for preservation. The lesson is clear: the sources historians rely on to craft historical narratives exist not by some consequence of nature, but because people like Eliza Hamilton worked to preserve them.

Hamilton not only ponders the sources of history, but also plays with the notion of historical accuracy itself. The musical was cast deliberately with actors of color, who fill every major role except that of King George III. The play’s success despite this apparent deviation from the conventions of historical narrative reveals that historical retelling does not necessarily rely on representational accuracy (that is, in this case, having white actors play white historical figures) to generate its power. But the production is more than just an example of effective colorblind casting. Most of the men and women onstage would not have been welcomed as citizens of the nation Hamilton helped create, but Hamilton insists that its history still belongs to them.

Miranda recently expressed interest in filming Hamilton with its current cast. Hopefully, that desperate high school history teacher will have the chance to show it to her class. Students deserve to see US history as something they have a role in crafting, not just something they ought to remember. The production asks that we not let history be told from a single perspective, especially if it’s one that props up a narrow vision of the country. Instead, Hamilton empowers its audience to think critically about the stories we are told, to engage actively with the messiness of the past, and to make it our own.