In late November 1999, a brigade of turtles stormed Seattle. Surprisingly loud, quick, and agile, they thronged the streets and shocked the bourgeoisie—not to mention members of the World Trade Organization, who were in town to negotiate global trade policy. Upon closer inspection, however, these radical reptiles turned out to be human activists sandwiched in cardboard shells they had spray-painted green. Along with masked anarchists (known as the black bloc) and union members, the human turtles faced down police and contributed to what’s still called—whether in admiration or consternation—the Battle of Seattle. 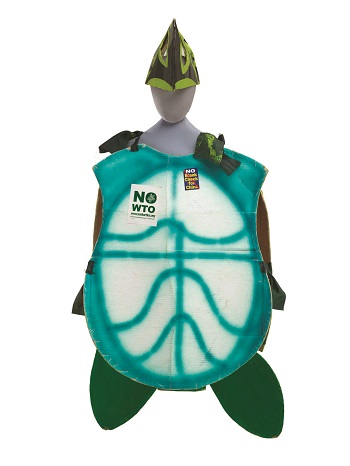 Today, one of those corrugated turtle shells is enshrined in a reverently dim stretch of corridor in American Enterprise, a new exhibition at the Smithsonian Institution’s National Museum of American History in Washington, DC. If it seems odd that the curators have chosen to tell the story of business in the United States by including an artifact associated with a thoroughgoing critique of capitalism, consider its close proximity in the exhibit to another object: a napkin upon which economist Arthur Laffer sketched his eponymous curve in 1974—a visualization that would transform tax policy and influence the Reagan administration. The juxtaposition characterizes the spirit of the whole. To say that American Enterprise employs a “show all sides and let viewers make up their minds” curatorial strategy would be missing the point entirely. As an expression of the place of business in the United States today—at a time when inequality shapes public conversation and Thomas Piketty’s Capital in the Twenty-First Century has become a bestseller—the exhibit acknowledges the ills of capitalism, but it also celebrates entrepreneurship as an expression of individuality. American Enterprise has a point of view, in other words—that Americans have had to find ways to support both the common good and business innovation and initiatives.

On a recent walk-through, cocurator Kathleen Franz of American University explained that the exhibit offers a narrative in objects and biographies, guiding museumgoers to think about how business history has an impact on the present day, in their own lives. “We wanted to explore the tension between capitalism and democracy,” she said, gesturing to the first of four “Debating Enterprise” panels, showing quotations from George Washington, Alexander Hamilton, and Thomas Jefferson on the proper economy for the new republic. “The conversations we had were intense,” Franz continued. “We knew we were telling business history from a different perspective, which played a role in what we thought needed to be represented in the exhibit.”

That perspective is both individualistic and inclusive. A wall of capsule biographies and images of entrepreneurs—famous and infamous, successful and failed—lines the back of the new Mars Hall of American Business (named after the exhibit’s lead donor, Mars, Inc.). In chronological order from the colonial era to the present, the featured personalities represent the changing and motley population of the United States as well as the conflicts between these personalities. It’s not just irony that has a panel picturing “Transportation Tycoon” Cornelius Vanderbilt hovering over another panel depicting the notorious slave trader James DeWolf of Providence, Rhode Island—it’s an effort to show, perhaps obliquely, where 19th-century wealth came from and how it circulated. Similarly, the Vanderbilt and DeWolf panels are fixed between photographs of the Paiute translator and activist Sarah Winnemucca (1844–1891) and the Chinese “exploited attraction” Atong Moy (about 1817–unknown). The elevation of Winnemucca and Moy to the status of inclusion in a national museum may seem dubious, but this small slice of history makes the case that entrepreneurship in the United States has included various people who nonetheless had differing relationships to capital, wealth, and power.

Franz and American Enterprise’s three other curators were clearly influenced by trends in historiography about business, science and technology, the environment, slavery, capitalism, and beyond. Walking into the exhibit, viewers confront a huge cart used by Métis beaver-pelt traders in the mid-19th century, materializing stories in Sylvia Van Kirk’s Many Tender Ties and other works. Photographs of civil rights movement picketers fighting for equality in public accommodations recall Lizabeth Cohen’s arguments about citizenship in A Consumers’ Republic, while a selection of items representing teenage girls’ consumer culture post–World War II (45 rpm records, Seventeen magazine’s original marketing kit for advertisers, and the short-lived 1953 magazine Color, aimed at African American girl consumers) builds on the work of Susan Douglas and Miriam Forman-Brunell. “Sven Beckert is my best friend,” joked Franz, referring to one of the historians credited with reinvigorating inquiry into the history of capitalism. (The two have never met.)

American Enterprise has met with some criticism. It’s hard to know when the Wall Street Journal critic Edward Rothstein reached his breaking point, but it seems to have come long before the corridor in which the “NO WTO” turtle looms near the Laffer napkin. To Rothstein, the exhibit was too “personal.” “An egalitarianism is at work,” he wrote, asking, “isn’t there . . . a reason why, say, J.P. Morgan might require more sustained attention than a Hawaiian pineapple farmer’s wife? . . . [W]hen history is told from below, it tends to miss the scale of what happens above.”

Perhaps. Certainly, this critique of social and cultural history is familiar enough to academic historians today. The exhibition’s curators, however, have attempted to engage members of the public with a democratic approach to capitalism. “Some people hear business history and think, yawn,” Franz said. “Our perspective was ‘it’s about you.’ We wanted to show that all of our lives are embraced by commerce.”