Lunch has always been one of my three favorite meals of the day. I find myself getting hungry around noontime, and a sandwich, salad, or last night’s leftovers does a dandy job of filling me up until dinner. As much, though, as I like lunch, until recently I had not thought much about the historical root of my noontime eats.

The National History Center and the American Historical Association are hosting monthly brown-bag lunches for any and all historians who find themselves in Washington, DC. These events got me thinking about how the midday meal in the United States had changed over time. 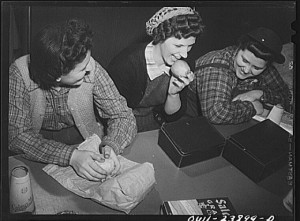 Women employees eating lunches brought from home at Ross Heater, makers of condensers for the Navy. Library of Congress.

Eating lunch with colleagues at the office is a relatively new phenomenon. Indeed, as Abigail Carroll explains in Three Squares: The Invention of the American Meal, lunch itself is new. Until the mid-19th century, Americans ate dinner, their main meal, midday. Changing work patterns shifted dinner to the evening, and, to tide themselves over until the nightly repast, Americans invented lunch. Based largely on the snack, lunch, Carroll writes, often featured cold foods and, increasingly in the 20th century, sandwiches. For many, it was also a snappy meal, with businessmen eager to get back to work and working people expected to do the same. Some, typically comfortably off men and women, however, rushed less and made the new meal central to their professional networking.

The NHC/AHA brown-bag lunches fit squarely within the meal’s networking tradition. All historians are welcome to come break bread—or, rather, bring their already-sliced, perhaps gluten-free version—and get to know their colleagues. And they have. Since May, the informal lunches have drawn historians at different points in their careers and working in diverse settings. Grad students and emerti have attended. Historians working in the Library of Congress and executive branch agencies, as documentary editors, as independent scholars, or in faculty positions in history departments or other departments have joined. Some live in the DC area, while others have been here temporarily. Staff of the NHC and AHA join the lunches too. 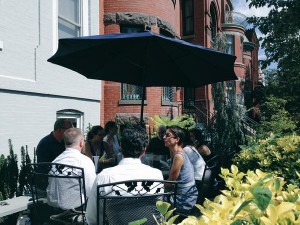 Historians gather on the AHA’s patio.

In DC or planning to be? We invite you to join us. The lunches are held at the AHA building at 400 A Street SE. When weather permits, we eat outside. When it doesn’t, we eat in the Beveridge Room. Due to meetings and staff obligations, lunches are not held on a regular day each month, but vary. The next lunch is this Friday, October 23, and upcoming dates can be found here.

As to the food itself, our colleagues have generally hewed to the 19th-century norm of cold lunches, with sandwiches, salads, and dinner leftovers the grub of choice. Now that I’ve had a chance to learn a little about the origins of the meal, however, this early Americanist may opt for what 17th- and 18th-century men and women ate morning, noon, and night: pie.