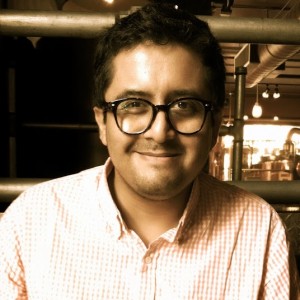 Javier Puente is an assistant professor of Latin American history at the Instituto de Historia, Pontificia Universidad Católica de Chile. He lives in Santiago, Chile, and has been a member since 2011.

I grew up in a country engulfed by civilian conflict and political violence. As a child of a military family, this conflict acquired a much more intimate dimension and deeply affected my quotidian life. Prior to going to college, I was completely unaware of the extent of the conflict and how unexceptional our family life had been. While becoming an undergraduate student in law, I had to take general education classes that introduced me to new ways of comprehending Peru’s immediate past and my very historical subjectivity. It did not take me long to switch majors and pursue a history degree. At the Universidad Católica in Peru, I learned a great deal from a number of outstanding mentors and professors, among whom I would like to mention the late Jeffrey Klaiber, a widely renowned Jesuit scholar who nourished many generations of Peruvians and Peruvianists and is now deeply missed. However, my education was really strengthened at home, where I tested many of the ideas I acquired in the classroom and typically found hesitation, resistance, skepticism, and even bitter criticism. No experience has prepared me better for a hostile audience than those conversations after dinner.

As a first-year tenure-track professor at the Instituto de Historia of the Universidad Católica de Chile, I am primarily working on developing new classes and lectures, and otherwise adjusting to a new work environment. When not preparing lectures, I work on further advancing my book manuscript, tentatively titled Village Peru: Landscapes, Sheep, and the Ecology of Campesinos in an Andean Heartland, which reconceptualizes 20th-century nation-state formation at the local level as an ecological quest, in which state governmentality and communal rationalities clashed over ideas about space, resources, and social relations of production. I have joined an interdisciplinary team of scholars at my home institution—from the animal sciences, geography, medicine, nutritional and ecological studies—with shared interests in livestock, soil, water, and their long-term relationship with humankind. The team will devote its efforts to an ongoing development project with grazing rural communities in Mozambique. Finally, I intend to start working on my second major project next summer, a history of rice and rice plantations, their transition from coastal to rainforest environments in Peru, and the manifold impacts of having rice as the primary crop and carbohydrate nationwide.

Yes and no. I started my doctoral training envisioning a dissertation primarily focused on Shining Path—the Maoist party that declared the commencement of an armed struggle in 1980. During seminars and workshops, I became aware of how potentially insular a sole focus on what has become known as the Internal Armed Conflict could be. Recent scholarship published on Shining Path has highlighted the need for seeing the latter period of conflict as an end point of long-term political and socioeconomic evolutions. In turn, my dissertation ended up focusing on the long history of a local, rural community located in what seemed to be a peripheral region of the conflict—geopolitically speaking. Yet the narrative provided by the very political intimacy of communal affairs showed enduring structures within which agrarian tensions and rural violence would arise. As I began the process of transforming the dissertation into a book manuscript, I could identify three elements that articulated these agrarian tensions: land, resources, and the ecologically framed social relations of production that emerge when these factors collide. My intent is to de-politicize the way we have conceived nation- and state-making by moving to the forefront the often-neglected rural spine of political projects. Finally, as I advance my career as a rural historian I aim to contribute to the revitalization of the study of local and rural environments—intersecting nature, politics, and the discourses that facilitate negotiation and legitimate dissent—and better explain recurrent episodes of social violence.

Peruvian literature on the Internal Armed Conflict has become particularly prolific with personal testimonies. There are two pieces I think any person interested in the human dimension of social tragedy and collective suffering, in Peru and elsewhere, should pay attention to. First, Lurgio Gavilán’s account of his manifold roles during the civil strife in Peru, published under the title of When Rains Became Floods (Duke Univ. Press, 2015). Lurgio Gavilán, an anthropologist completing his doctorate in Mexico, joined Shining Path during his childhood, was enlisted in the army amidst the militarization of the conflict, and ultimately became a Franciscan. Second, José Carlos Agüero’s reflections on his role as the child of two Shining Path guerrillas. Los Rendidos: Sobre el Don de Perdonar (Instituto de Estudios Peruanos, 2015)is a generous act of public catharsis that reveals the extent and limits of historical guilt and forgiveness. The lives and testimonies of Lurgio and José Carlos shed light upon a time of obliteration and darkness.

Besides personal motivations mentioned above, and a certain cathartic aspect involved in historical writing—I truly believe who we are determines what we write. I like how history, professionally speaking, stands at the forefront of the liberal arts in a world increasingly dominated by other forms of knowledge. History has remained vitally focused on the human being while at the same time has diversified its interests, methodologies, and practices—revealing the web that historically interconnects diverse subjects over time and space. Furthermore, there are only a handful of careers in which contemplating, intellectually reflecting, and generating knowledge are so fundamental. More intimately, and at the risk of expressing something utterly embarrassing, every time I expose myself to new scholarship through books, articles, and conferences I “enjoy” the deep (and fairly overwhelming) sense of ignorance that floods me. A mentor who surely prefers to remain anonymous told me, long ago, this feeling was a step closer to wisdom. I must confess I am very skeptical about that.

I became a member of the AHA as a senior graduate student, prior to presenting at the Conference for Latin American History meeting. While my mentors at Georgetown did a great job in promoting student memberships with professional associations, I think graduate students should be generally more fully informed about the advantages of joining the AHA in earlier stages of their careers, something I only learned after actively attending two conferences. I remained as a member primarily for fellowship and, later on, job-hunting purposes. It is at the annual meeting, though, when one really realizes the whole potential of being part of the AHA. When presenting my own scholarship, I was generously invited to join all sorts of collective endeavors. Some have already materialized in the form of articles in edited volumes and subsequent panel presentations. Likewise, I have greatly benefited from learning about colleagues in different stages of their careers and, in the case of early-career scholars, this knowledge has been absolutely instrumental in a new editorial position I started this fall. As a final note, I would like to join a rising advocacy for adjunct instructors, graduate students, and other underpaid colleagues paying conference fees for having access to the Job Center. This contradicts one of the foundational pillars of the AHA as a vehicle for empowerment of many deserving but unrewarded scholars. Ultimately, as I transition back to Latin America after seven years of doctoral and postdoctoral training, I am certain the AHA will serve as a primary point of contact between my academic environment and US academia.

In my first AHA meeting in New Orleans, I was able to personally meet a lot of the people I had only learned about through their scholarship. I think many times we envision authors of great (and not-so-great) books in a certain way, and that image rarely corresponds with reality. Some look (and genuinely are) a lot cooler; some seem (though typically are not) more daunting. During one cocktail event, I talked to a scholar—who shall remain nameless—who came across as very nice and laid-back. I only realized who the person was after several minutes of an otherwise interesting conversation and a few bottles of beer. It was a weird feeling of excitement and embarrassment.

I like football, or soccer, as it is (unfairly) known in the United States. I am not sure I would go as far as to say that everything I learned about morality was through soccer, but my colleagues working on sports history have taught me a great deal about the many things that are presented and represented inside a football field. Lately I have become very interested in yoga, meditation, vegetarianism, and a number of other seemingly hipster-ish practices. I have failed in becoming vegetarian, cannot meditate for more than a few minutes, and am still working on my chaturanga—but I will fight the good fight.