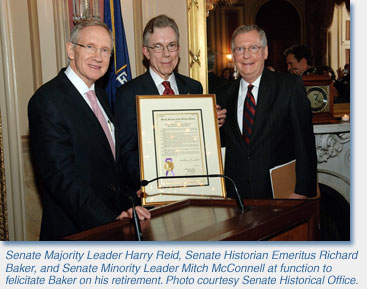 Several current and former senators of the United States—including the majority leader, Sen. Harry Reid (D-Nev.) and the minority leader, Sen. Mitch McConnell (R-Ky.)—gathered in a Senate reception room on an afternoon in early August to bid a truly bipartisan and fond farewell to Richard A. Baker, who was retiring at 69 after serving for 34 years as the historian of the Senate.

The U.S. Senate has a long and colorful history. Much of that was recorded in minute books and registers that gathered dust in dank, dark basements in the Capitol. It was only in 1975 that the Senate set up a historical office, and appointed Richard Baker as the very first official historian of the Senate.

Baker, who studied at the University of Massachusetts at Amherst, Columbia University, and Michigan State University before going on to get his PhD from the University of Maryland at College Park, brought with him a passion for history—for congressional history in particular—that sustained him in the job that he held for more than three decades. Whether overseeing the compilation of inventories and bibliographies and preserving the Senate’s record, answering a multitude of queries about the history of the Senate, or introducing new senators to the hoary lore of the Congress, Baker was kept busy. Yet he also managed to write several books, including Senate of the United States: A Bicentennial History (1988), Thirty Minutes of Senate History (1998), a compilation of 30-minute historical talks he gave to the Senate Democratic Conference; and, most recently, 200 Notable Days: Senate Stories, 1787 to 2002 (2006). He assisted Senator Robert C. Byrd (D-W.Va.) with his magisterial, multivolume history of the U.S. Senate, and collaborated with him on a history of the Roman Senate. As Sen. Byrd remarked in a statement quoted in the New York Times, Baker was “ready to go above and beyond the call of duty in providing his assistance” and “although he was responsible to 99 other senators, he was always there, eager to help.” That Baker extended his help in a professional, nonpartisan manner was echoed in the fond and laudatory remarks offered by Sen. McConnell, who declared, “Over the last 34 years, Dick has learned just about everything there is to know about the Senate, and he’s shared his vast knowledge of this place with anyone who’s asked.” McConnell recalled how Baker once went beyond the usual assistance he patiently rendered to anyone—journalists, historians, authors, and tourists alike—who asked about the Senate’s history, to accompany historian David McCullough on an after-hours run in the corridors of the Capitol to recreate Harry S. Truman’s similar run the night President Roosevelt died. McConnell also quoted from a message received from another historian of the Senate, Robert Caro, who stated, “During his decades as Senate Historian, Dick made the Senate Historical Office not just a storehouse but a treasure house of information about America’s great deliberative body.”

Baker, a former president of the Society for History in the Federal Government pushed for openness in government and was responsible for drafting the rules for providing access to the Senate’s records at the National Archives. However, Baker did not work to expand access to the Senate’s history merely for historians. He was as much interested in the general public getting to know more about the Senate. Not surprisingly, Baker was closely involved in the planning of the new Capitol Visitor Center. He was long troubled that visitors to the Capitol were precluded from seeing the Senate’s gallery if the Senate was in recess. He was moved, therefore, when Sen. McConnell announced at the retirement ceremony that as special parting gesture, the Senate had decided that the gallery would be opened to visitors to see even when the Senate was in recess.

A few days before the function to felicitate Baker, the Senate unanimously approved a resolution introduced by Sen. Reid and cosponsored by all his 99 colleagues, which designated Baker as historian emeritus of the United States Senate “as a token of the appreciation of the Senate for his long and faithful service.” As Baker told the New York Times, historians have a good life because they never really retire. “You just switch workplaces,” he said. 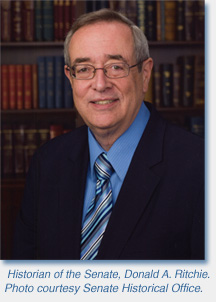 Donald A. Ritchie, who was the associate historian of the Senate,succeeds Baker as the Historian of the United States Senate. A graduate of City College of New York, he received his PhD in history from the University of Maryland at College Park, and joined the Senate Historical Office in 1976. He has published several articles on American political history and oral history. His books include Reporting from Washington: The History of the Washington Press Corps (2005), Electing FDR: The New Deal Campaign of 1932 (2007), Doing Oral History (2003), and the Oxford Guide to the United States Government (2001). He has also coauthored two textbooks, The American Vision and The American Republic.

Ritchie has also edited the Minutes of the U.S. Senate Democratic Conference, 1903–1964 (1999), and also edits the Executive Sessions of the Senate Foreign Relations Committee (Historical Series, 1978–present). A former president of the Oral History Association and Oral History in the Mid-Atlantic Region (OHMAR), Ritchie has served as the co-chair of the 2009 Program Committee of the Organization of American Historians. He received OHMAR’s Forrest Pogue Award for distinguished contributions to the field of oral history.

Betty K. Koed has been appointed to be the associate historian of the United States Senate in Ritchie’s place. She has a PhD from the University of California at Santa Barbara (UCSB), where she studied U.S. political and public history. Prior to joining the Senate Historical Office in June 1998, Koed taught at UCSB and served on the editorial staff of The Public Historian. She is a former officer of the Society for History in the Federal Government, and has co-edited that organization’s quarterly newsletter, The Federalist. She served on the editorial board of The Public Historian from 2000 to 2009. She is also adjunct professor of history at Cornell-in-Washington. She is currently producing an administrative history of the U.S. Senate, 1789 to the present, as well as documentary histories of Senate impeachment trials, notable Senate investigations, and contested Senate elections. She is senior editor of the print and online editions of the Biographical Directory of the U.S. Congress and serves as the Senate’s history webmaster.