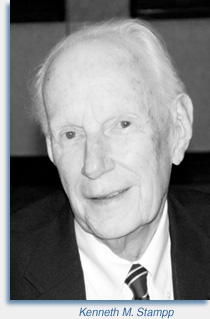 Kenneth M. Stampp, a formidable scholar and teacher and one of the most influential historians of the 20th century, died in Oakland, California, on July 10, 2009. He is best known for his sharply revised assessments of three central chapters in the American experience: slavery, the coming of the Civil War, and Southern Reconstruction. Although his works aroused controversy in some quarters, his arguments were intellectually compelling and his interpretation has prevailed. Any comparison of textbooks in United States history published from the 1920s to the present would reveal how profoundly he has reshaped the ways we think about our past.

Born in Milwaukee, Wisconsin, on July 12, 1912, Kenneth Stampp was heavily influenced in his youth by his family’s devout Methodism, Socialist and LaFollette Progressive traditions, the largely German neighborhood, and an unpopular war. By the fifth grade he aspired to be a history teacher. After receiving his BA in 1935 from the University of Wisconsin at Madison, Stampp taught briefly in high school before choosing to enter a doctoral program in history.

Entering graduate school in the Great Depression, Stampp found Madison hospitable to his radical politics. He worked with William B. Hesseltine and several other professors steeped in Charles Beard’s economic interpretation of history. He also established a close friendship with fellow students Richard Current and Frank Friedel. Outside the classroom he attended Communist and Socialist party meetings, finally opting for membership in the Socialist party as more congenial to his pacifism. Throughout his long career, however, Stampp remained an independent and unaligned thinker, refusing to adopt uncritically any particular ideology or interpretive scheme. His graduate training reinforced his interest in the South; he wrote his master’s thesis on the anti-slavery movement in the South and his dissertation (and first book) on Indiana politics during the Civil War.

After a short stint teaching at the University of Arkansas, Stampp joined the faculty at the University of Maryland in 1942 (the same year he received his PhD) and taught there with two enduring friends, historian Richard Hofstadter and sociologist C. Wright Mills. Unable to reconcile World War II with his pacifist views, he managed to avoid military service. “The draft board never called me, and I was not going to volunteer,” he said.

In 1946 Stampp accepted an appointment as assistant professor of history at the University of California at Berkeley. He remained there until his retirement in 1983. During the 1950s, as one of the “young Turks,” he was instrumental in transforming the department through appointments and tenure decisions into one of the most prestigious in the nation. In 1957 he became the Alexander F. and May T. Morrison Professor of American History.

And the War Came: The North and the Secession Crisis, 1860–61, published in 1950, quickly established Stampp as one of the leading historians of the Civil War. The critical issues that brought on the “irrepressible conflict,” most of all slavery, did not yield to any sectional compromise. The inescapable tragedy of this costly war, Stampp believed, is that it had to be fought.

The depiction of slavery familiar to generations of Americans featured a docile black population whose history was said to have been one of submission gladly endured. The Peculiar Institution, published in 1956, demolished the myths sustaining this interpretation; it remains to this day the indispensable study of the enslavement of African Americans in the Old South, how they learned to survive, how they insisted on their humanity, and how they transcended their condition. The book has influenced nearly three decades of scholarship and teaching. In all subsequent studies, the voices of the slaves themselves could no longer be denied. “Tisn’t he who has stood and looked on, that can tell you what slavery is,” Stampp quotes a slave, “‘tis he who has endured. I was black but I had the feelings of a man as well as any man.” And no historian had made as clear the fact that though defined as chattel the slaves proved to be from the very moment of their enslavement “a troublesome property.”

Even as historians had once mischaracterized slavery, they condemned Reconstruction as a tragic era of unrelieved corruption and depravity foisted on a prostrate South by alien and venal Carpetbaggers and Scalawags and by Negroes incapable of exercising the civilized functions of government. For nearly a century, this distorted view of Reconstruction united whites in opposing, forcibly if necessary, any challenge to segregation, disfranchisement, or white supremacy. No period in American history stood in greater need of reappraisal.

Stampp accepted the challenge of reappraisal, and in Reconstruction, 1865–77, published in 1965, he countered with an altogether different version of reality. Building on several state studies and the previous work of W.E.B. DuBois (which the American Historical Review had ignored), Stampp underscored the achievements of the first integrated governments in the South, the bipartisan character of corrupt governments in this period, and the ability of blacks to learn the uses of political power and act on their own vision of a biracial democracy. In the end, Stampp argued, not black corruption but white terrorism undermined the efforts to bring democracy to the South.

In his long career, Stampp’s many distinctions included the presidency of the Organization of American Historians (1977–78); election as a fellow of the American Academy of Arts and Sciences (1975); election to the American Antiquarian Society (1972); a Guggenheim fellowship (1952–53, 1968); a Fulbright lectureship at the University of Munich; the Harmsworth professorship at Oxford University; the Commonwealth lecturer at the University of London; Gettysburg College’s Lincoln Prize for lifetime contributions in Civil War studies (1993); and the American Historical Association’s Award for Scholarly Distinction (1989).

The breadth of Stampp’s interests extended well beyond the academy. He was also an avid reader of fiction, and a devotee of the symphony, the ballet, the theater, and the opera. In a different arena, he was a passionate fan of the Milwaukee Braves and the Green Bay Packers.

Stampp cared deeply about the world in which we lived, and what we make of this society. From his Socialist days in Wisconsin to the election of 2008 and the inauguration of Barack Obama, he was an avid observer of the political scene, defining himself in 1996 as a “left-wing Democrat.” (He called me the night of Obama’s victory, incredulous that he had lived to witness this event.)

From the very outset, he immersed himself in the political life of Berkeley. He fought early on to abolish the ban on Communists speaking on campus. He was outspoken in opposing the Regents’ faculty loyalty oath, and helped to organize financial support for the non-signers. He supported the CORE sit-ins to force stores to employ black people, and in 1965 he participated in the march from Selma to Montgomery, Alabama, organized by Martin Luther King Jr., to express solidarity with the civil rights movement. During the Free Speech upheaval, he came to the defense of students protesting the ban on political activity on campus, in this case activity in support of civil rights.

What characterized Kenneth Stampp as a scholar was not only impressive archival research but sound judgment, the breadth of his interests, the clarity and rigor of his analysis, a respect for the complexity and integrity of the past, and an elegant and engaging style. He always cared deeply about how to communicate history, about the need to make that history available not only to historians and students but to a larger public. The best history makes a difference in how people conceptualize, think about, and feel their past. Kenneth Stampp made that kind of difference.

His published works and teaching are his legacy. But he will be remembered as well for his sheer presence in our lives and thoughts—in the idea that knowledge of our troubled past may help to liberate us as a people from the ravages of racial bigotry, economic inequality, and war and the weapons of war. Kenneth Stampp as a historian always faced up to the moral dimensions of the debates over slavery, the Civil War, and Reconstruction, that, in the words of Frederick Douglass, “there was a right side and a wrong side . . . which no sentiment ought to cause us to forget.”