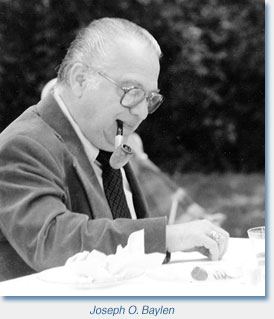 Few students fortunate enough to have attended one of Joe Baylen’s lectures ever forgot the experience. He vividly brought the great personalities of history to life, and sometimes it seemed almost as if he had known them all himself. Joseph O. Baylen, Regents Professor of History Emeritus at Georgia State University, died of pneumonia on June 19, 2009, in Eastbourne, Great Britain, at the age of 89.

An expert on Victorian and Edwardian Britain and Anglo-Russian relations, Baylen was the author of over 130 articles, chapters, and monographs. A favorite subject was British journalist and reformer W.T. Stead; he wrote 22 scholarly articles on Stead alone. Never a narrow specialist, however, Baylen’s publications included topics in Russian, American, French, and Latin American history. For instance, he did pioneering work on the Nicaraguan revolutionary Augusto Sandino (Hispanic American Historical Review, 1951, and Mid America, 1954). Together with Norbert J. Gossman, he edited The Biographical Dictionary of Modern British Radicals since 1770 (Harvester Press, 1979, three volumes). His many awards and honors include two Fulbright Lectureships in the United Kingdom (Wales, 1961; York 1972), a Guggenheim Fellowship (1958), and a fellowship at Princeton Institute for Advanced Studies (1966). From 1972–74, he served on the executive council of the American Historical Association.

Baylen was a consummate researcher, often unearthing treasure troves of lost documents. Former AHA President Wm. Roger Louis once fondly recalled the day when, with eager anticipation, he entered the office of a remote parsonage in rural Britain where he expected to find important, undiscovered source material. But, on entering the room, he found his friend, Joe Baylen, already there enthusiastically sifting through the papers. Because of his skill at research, only a novice graduate student would ever tell Professor Baylen that he or she “could not find much” on any topic.

Born in the ethnically divided, working-class neighborhoods of Chicago in 1920, he worked his way through Northern Illinois University where he graduated in 1941. Almost immediately thereafter, he entered the U.S. Army where he went from private to captain in the next five years. During World War II, he served in the cavalry, army intelligence, and the Office of Strategic Services (OSS). At OSS his supervisor was Marxist philosopher Herbert Marcuse and his co-worker was Julia Child, the French chef. After the war, Baylen returned to graduate school, earning a master’s degree at Emory University (1949) and a doctorate from the University of New Mexico (1949). During his ensuing academic career, he taught at New Mexico Highlands University, Delta State University, Mississippi State University, the University of Mississippi, and Georgia State University, where he spent 16 years. A talented and formidable administrator, he chaired history departments at Delta State, Mississippi, and Georgia State. In 1969, he was designated a Regents Professor of History by the University System of Georgia.

Baylen retired in 1982 and moved to his beloved southern coast of Great Britain. Until he was physically unable to do so, he continued to conduct research, publish articles and book reviews, and serve as a reader and advisor to graduate students in the United Kingdom.

Despite his many academic achievements, Joe Baylen will be most remembered as a master teacher and mentor. Although his numerous graduate students may not have realized it at the time, when Baylen agreed to direct their studies, he was making a lifelong commitment. He supported his students from that instant, throughout their careers, and into their retirements. His devotion and loyalty to his students was total. As Diane Willen, a colleague and later department head at Georgia State, observed, “The bond between Joe and his students was somewhat inexplicable but never in doubt. Joe was loyal and committed to his students’ well-being; they in turn were devoted to him.”

Joseph O. Baylen was truly a unique and unforgettable character who taught and led by example, never asking anyone to do anything that he was unwilling to do himself. He demonstrated to faculty and students alike the advantages of hard work, the value of accuracy and thoroughness, and the importance of treating others, regardless of station, with dignity and respect. Like the illustrious men and women of history he brought to life in the classroom, he was one of those rare individuals who really did make a difference.