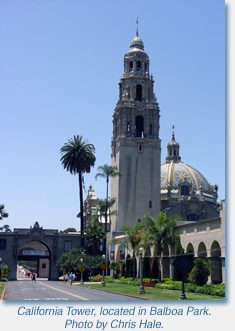 San Diego’s Spanish colonial heritage is one enduring feature of the past that generates intense interest from visitors to the city. Balboa Park and the two San Diego World’s Fairs, held in 1915–16 and 1935–36, are no exception. Both the park and the legacies of the two expositions establish the heart of public institutions dedicated to the fine and creative arts, and culture and history in San Diego. Balboa Park and the World’s Fair contributions to the city blend invented traditions and local history together to create a unique Southern California cultural landscape.

Balboa Park and its museums (www.balboapark.org) will be within convenient reach for AHA meeting attendees, a brisk 30-minute walk uptown toward Hillcrest (or North) along either Fifth or Sixth Avenue from the Marriott or Hyatt. It is a short cab or bus ride as well. Once you reach Laurel Street, make a right (East). Laurel Street turns into El Prado, the main entrance to Balboa Park. Once across the Cabrillo Bridge, one enters the heart of Balboa Park, the California Quadrangle, a group of four Spanish Colonial Revival buildings designed by New York architect Bertram Goodhue and his assistants Carleton Monroe Winslow and Clarence Stein for the Panama California Exposition of 1915–16.

Balboa Park evolved from the Spanish settlement of California in 1769. Before the Mexican-American War in 1846, Spanish and Mexican officials designated the environs of Balboa Park as grazing lands to be shared by the common citizens of the settlement. These lands far surpassed the 1,400 acres of park land today. The land remained a dusty and scrubby landscape inundated with small canyons, where wildflowers bloomed during winter rains and wild cattle roamed freely. In 1868, San Diego city leaders Ephraim W. Morse, Alonzo Horton, and José Guadalupe Estudillo recommended that the old Spanish common lands be turned into a park. Two years later the state of California declared the land “be held in trust forever, by the municipal authorities of said city, for the use and purpose of a free and public park—and for no other or different purpose.”

In 1909, San Diego announced its intention to hold the Panama-California Exposition and local leaders renamed “City Park” as “Balboa Park” in 1910, after the Spanish conqueror Vasquez Núñez de Balboa. The primary reason for the fair was economic: to promote business and industrial growth, and commemorate the opening of the Panama Canal and San Diego’s position as first port of call on the Pacific Coast. There were other primary themes, however. Writing in Sunset Magazine, fair director David C. Collier described the main theme as “The Progress and Possibility of the Human Race,” where the “most interesting things in the world are its peoples,” and what different cultures and peoples “are doing; what they are thinking about and what they are accomplishing.” With a focus on the indigenous and Spanish culture of the southwestern borderlands, Mexico, and Latin America, the Panama-California Exposition strove to educate the people of the American West and the United States about the antiquity, culture, history, and peoples of the Americas and their human connections to the rest of the globe.

The Panama-California Exposition made a lasting imprint on American culture by creating cultural connections with the Southwest Museum, the Museum of New Mexico and School of American Archeology, and the United States National Museum of the Smithsonian Institution. All cultural institutions involved with Native American and Spanish Southwest research formed a powerful network to highlight “ancient America” through comparison with classical Greece, Mesopotamia, and the “Orient.” Where European “tradition” oriented itself towards the Mediterranean, the United States could look to the antiquity of the Americas for cultural inspiration, thus inventing a homegrown nationalism. The USNM and its division of physical anthropology designed exhibitions to showcase three areas in anthropology, namely the physical evolution of humanity, the evolution of culture, and the native races of America and favorably assess the artistic life of Amerindian civilizations. The SAA and MNM coordinated many exhibitions on the Southwest’s native peoples and antiquities. Tourists found the Santa Fe Railway’s “Painted Desert” Indian village the most fascinating exhibition, a 10-acre Indian village with about 100 Southwestern Indians with Pueblos the most numerous, and also Apaches, Hopis, and Navajos. The acclaimed San Ildefonso village potters María and Julian Martínez attended, as well as artists Crescencío Martínez and Alfonso Roybal (Awa Tsireh). Within the Indian Arts, Fine Arts, and New Mexico State buildings, there were dramatic Spanish Catholic paintings and frescoes of ancient American cities by artists Donald Beauregard, Gerald Cassidy, and Carlos Vierra. In tandem with the nostalgic thrust of the New/Old Santa Fe cultural revival of 1912, the MNM impressed their interpretation of the Spanish heritage in Southern California.

The Spanish fantasy heritage theme of the fair created a modern regional tradition, where the built environment and promotional image of Southern California was set firmly in the Native American and Spanish past. Local historic preservation of the Spanish mission and presidio began as well. In the elaboration of this theme, the organizers of the exposition sought to weave the history of Spain, Mexico, and Native America into the tapestry of American memory.

San Diego decided to stage another world’s fair in the early 1930s to overcome the economic depression that had descended upon the city. San Diego thus joined a small company of American cities that had held both a Victorian and Century-of-Progress Exposition, such as Chicago, New York City, San Francisco, and Philadelphia. In July 1934, San Diego businessmen met and named the event the California-Pacific International Exposition. The directors of the CPIE approached the FDR administration and stated that the “exposition will tend to inspire national confidence and a higher appreciation of American institutions, stimulate business and industry, and assist the government in bringing a more abundant life to its people.” In spring 1935 the federal government approved, and with abundance as the theme and the New Deal featured prominently, the fair would portray the latest installment of the California Dream.

The corporate exhibitions included the Ford Motor Pavilion, the Ford Bowl, the General Motors Building, the Standard Oil Tower, and the Firestone Singing Fountains. The Federal Building proved popular, as well as the Palace of Water and Transportation. All these buildings and displays belonged to the newest architecture in Balboa Park, named the Palisades Group, designed by San Diego architect Richard Requa and his assistant Juan Larrinaga. By blending Art Deco and Mesoamerican forms and styles, Requa believed the Palisades embodied modernism, while remaining “in historical harmony with the old buildings,” which had been created by Bertram Goodhue in 1915. Other exhibitions included the House of Pacific Relations meant to promote world peace, the Spanish Village, the Old Globe Theater, the Women’s Palace, a nudist colony called Zorro’s Garden, the Gold Gulch, and the Federal Housing Administration’s Palace of Better Housing that included two exhibits named Modeltown and Modernization Magic. The most popular entertainments, especially for men of all ages, were the burlesque shows, Zorro’s Garden, and the antics of Gold Gulch Gertie, who performed a Lady Godiva ride daily. During the 1936 season after some intrigue and a management shakeup, the Zócalo featured three shows by Fanchon and Marco to offer more wholesome, family-oriented entertainments. Nonetheless, local authorities became chagrined when Sally Rand, the famous fan dancer, performed numerous shows in the Lily Pond in April 1936.

The California-Pacific International Exposition helped renovate and restore the original buildings in Balboa Park with Reconstruction Finance Corporation and State Emergency Relief Administration monies. The California Dream imagery fused with the theme of abundance at the fair to symbolize the high-wage, suburban, white-collar, and consumer-oriented industrial democracy that awaited the United States after World War Two.

—Matt Bokovoy is senior acquisitions editor for Native and Indigenous Studies and the American West for University of Nebraska Press. He is author of The San Diego World’s Fairs and Southwestern Memory, 1880-1940 (University of New Mexico Press, 2005).