Coffee and Careers: Why You Should Attend the 2016 Career Fair in Atlanta

If the thought of a Career Fair makes you shudder, it’s probably because you haven’t been to one at the AHA annual meeting. For the past two years, under the auspices of Career Diversity for Historians, we’ve tried out a new way to host a Career Fair. Taking advantage of the many historians gathered under one roof (technically three, since meeting attendees will be staying at three hotels), our third annual Career Fair aims to highlight the diversity of career paths open to trained historians, as well as the many employers who hire them. It’s a kinder, gentler, more exploratory career fair, so bring your business cards and join us January 9 from 1–5 p.m. in the Atlanta Marriott Marquis, Marquis Ballroom. Oh, and there will be free coffee. 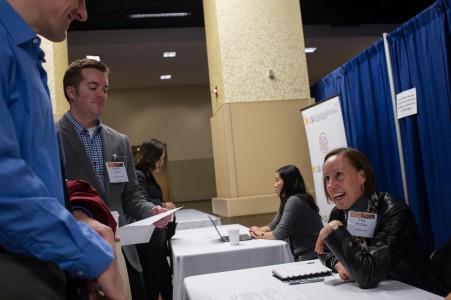 So, what makes our Career Fair different? First off, it’s of and by historians. The advisers represent history PhDs who have found careers beyond the professoriate, as well as representatives from institutions that hire trained historians. Where else can you find historians from such a variety of career paths, and employers from such a variety of sectors, excited to talk to early career historians about their professional options? Last year’s fair attracted more than 30 advisers—independent historians as well as historians from government agencies, historical societies, nonprofits, businesses, colleges and universities, presses, K–12 institutions, and more. Over 100 graduate students and early career historians turned out to talk to this varied gathering. If you’re interested in volunteering as an adviser, or know someone near Atlanta who you think would be a perfect fit, you (or your friend) can sign up here.

In addition, this year we are adding two new features, aimed at tailoring the Career Fair to the needs of early career historians. 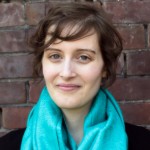 First, I’m delighted to announce that Jennifer Polk (FromPhDtoLife.com) will be joining the Career Fair to emcee events and lead skill-building breakout sessions. A historian with a PhD herself, Jen spoke eagerly of her plans to participate: “Career Fairs can be intimidating, and our intention is to make this one as welcoming as possible! We’re hoping that by providing a bit of extra structure, we can help attendees feel more comfortable meeting other historians to learn a bit about their careers, as a prelude to more formal informational interviews, or simply to practice their networking skills.” Jen will also have a projector at her booth. The slideshow is under construction, but it will highlight reflections from advisers on their career paths and thought-provoking questions from and for attendees.

Join Jen for these scheduled breakout sessions, to be held in the same room as the rest of the Career Fair:

Finally, though it is hardest for graduate students to learn about career paths that lead beyond the professoriate, Career Diversity for Historians has also discovered something else: many graduate students are unaware of what the day-to-day life of an assistant professor is like, and how much the job varies from institution to institution. (For example, see “Professoring 101,” posted earlier this week on AHA Today, in which Career Diversity pilot program leader Jen McPherson follows Professor Caleb Richardson through a typical day at work.) To address this, one booth at the Career Fair will invite attendees to “Ask an Assistant Professor.” Like “The Doctor is In” of Peanuts fame, this booth will host a rotating cadre of assistant professors, volunteering an hour of their time to speak to graduate students about what it’s really like to be an assistant professor. Come with your questions; a roster of volunteers will appear on the Career Fair web page closer to the meeting date.

If you’re interested in attending the Career Fair or any of these breakout sessions, please RSVP, so that we can shape the sessions to best suit expressed interest.

Oh, and if the rest of this does not draw you to the Career Fair, maybe this will: did I mention there will be free coffee? See you there!