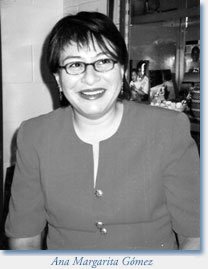 Ana M. Gómez, assistant professor of history at William Paterson University of New Jersey, died on February 11, 2008, after a long battle with cancer. She was only 44, but her short career was distinguished by exceptional teaching and distinguished scholarship. A Latin American historian, Gómez focused on Central American society and the military.

Born in El Salvador, Gómez moved to California with her family during the Civil War of the 1980s. She received bachelor’s and master’s degrees from San Francisco State University. Her interest in Latin American history led her to the graduate program in history at the University of Minnesota, where she received her PhD in 2003.

Gómez’s dissertation, “Al servicio de las armas: The Bourbon Army of Late Colonial Guatemala, 1762–1821,” was written under the direction of Carla Rahn Phillips and Stuart B. Schwartz. Based on extensive archival research in Guatemala and Spain, the thesis was meticulously argued and theoretically sophisticated. It made an important contribution to the history of colonial Latin America, but also had much to say about present-day Guatemalan politics. By examining military culture in the 18th and early 19th centuries within the legal framework of the colonial regime, Gómez helped to explain the prominent role the army has played and continues to play in Guatemalan society. The dissertation was supported by research awards from Yale University, the University of Minnesota Graduate School, the MacArthur Foundation, and the Program for Cultural Cooperation between Spain’s Ministry of Culture and United States Universities.

During her short career, Gómez was remarkably productive. In 2003, she co-edited a book with Sajid Alfredo Herrera Mena, Mestizaje, Poder y Sociedad: Ensayos de Historia Colonial de las Provincias de San Salvador y Sonsonate (Race, Power, and Society: Essays on the Colonial History of the Provinces of San Salvador and Sonsonate) published by Facultad Latinoamericana de Ciencias Sociales. She was also general editor with Herrera Mena of the book series Realidad Historica published by the Universidad Centroamericana “José Simeón Cañas.” In 2007, Gómez and Herrera Mena released the first volume in this series: Los Rostros de la Violencia: Guatemala y El Salvador Siglos XVIII y XIX (The Many Faces of Violence: 18th- and 19th-Century Guatemala and El Salvador). Gómez was a member of the editorial board of the Revista de Historia del Archivo Nacional de El Salvador. She was also an active member of the Latin American Studies Association and the Conference on Latin American History.

Gómez was also a dedicated and extremely popular teacher, from her graduate school days at Minnesota, to her year at Lewis University in Chicago, 2003–04, to her time at William Paterson, 2004–08. Gómez was instrumental in revitalizing William Paterson’s Latin American Studies Program, and she taught a vast array of courses, many of which she introduced for the first time. Her courses included surveys of colonial and modern Latin America, pre-Hispanic civilizations, and women’s history. She also taught seminars on comparative empires, slavery, contemporary cultural currents, and postmodernism. An entertaining, even theatrical, lecturer and passionate discussant, Gómez challenged her students to reflect upon their personal values and commitments, and to experience empowerment through education. No one could ever sleep through her classes.

With Ana Gómez’s passing, the history department at William Paterson is a far duller and frumpier place. Her colleagues will long remember her intellectual rigor, her enthusiasm for teaching, and her devastating sense of humor. An intensely social creature, Gómez loved to share good food and wine with her friends, to argue over politics, and to search out alternative music and movies. To honor Ana Gómez’s memory, her friends and colleagues at William Paterson University have established in her name an annual film festival on issues related to globalism.