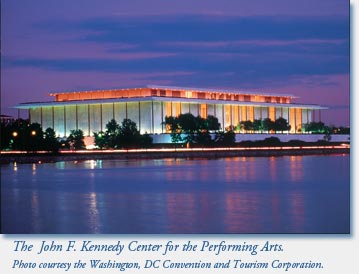 Historians who travel to Washington primarily for research or other professional activities might not realize that the city has an active theater and classical music scene. Opera? The symphony? New plays? World-class choral music? Classics of American musical theater? Innovative dance? Shakespeare in the park? Washington has it all.

Some of Washington's theaters, including Ford's Theater (soon to be closed for renovations) and the Kennedy Center, are historic landmarks familiar to many visitors. National tours make their way to the Kennedy Center (which is also the home of the National Symphony Orchestra, directed by Leonard Slatkin, and the Washington National Opera, directed by Plácido Domingo), the National Theater, and the Warner Theater. But Washington also contains small theaters, including Studio Theater, Wooly Mammoth Theater, and the Arena Stage, which draw on a rich pool of local and regional talent to present original productions and new works. One of my favorite venues for a concert or a play is the Folger Shakespeare Library's beautiful and intimate Elizabethan theater, where you can hear the Folger Consort or catch one of the many theatrical productions or readings staged there each year. You can enjoy a show in the beautifully restored Lincoln Theater on U Street (a vaudeville and movie theater that opened in 1922) or the renovated Atlas Performing Arts Center on H Street (the old Atlas movie theater, built in 1938, and the new home of the Washington Savoyards), both old Washington institutions enjoying a new lease on life. The GALA Hispanic Theater makes its home in another Washington landmark, the renovated historic Tivoli movie palace in Columbia Heights.

Washington's non profits, embassies, patriotic and genealogical organizations, and museums contribute to the city's flourishing cultural life. Many embassies sponsor chamber groups and other concerts, and the city's museums host concerts and theater productions. Many of these events are free. You might hear Grieg at the Norwegian Embassy, Schütz at the German Embassy, or Satie at the French Embassy. The Library of Congress owns a unique collection of priceless musical instruments (including two Guarneri violins), and performers play some of those instruments in free concerts open to the public (get more information at www.loc.gov/rr/perform/concert/). The National Portrait Gallery sponsors an innovative Cultures in Motion program (www.npg.si.edu/event2/event1.htm), while other Smithsonian museums organize concerts and productions to accompany special exhibits (check the extensive schedule at www.si.edu/events/perform.asp). Other concert venues include DAR Constitution Hall, the Organization of American States, Tudor Place, Dumbarton Oaks, and Dumbarton House.

In addition to the National Symphony Orchestra and the Washington Opera, music lovers can hear the Baltimore Symphony Orchestra (directed by Marin Alsop), which performs locally at Strathmore Hall in Bethesda. The city has three large symphonic choruses and far more small ensembles, including choral groups that specialize in the music of Latin America (Coral Cantigas), Germany (the Washington Kantorei), early music (the Folger Consort, Hesperus, Chantry, and others), Bach and his contemporaries (the Washington Bach Consort), and choral music from many centuries (the Woodley Ensemble and Cantate Chamber Singers). These groups perform at churches (including the National Cathedral and the Basilica of the National Shrine of the Immaculate Conception, both interesting destinations in their own right and two wonderful spots to catch free organ recitals) and other sites all over town. The Benjamin T. Rome School of Music at Catholic University also offers frequent performances. Washington universities also have good theater and concert facilities, with American University's Katzen Arts Center, Georgetown University's Royden B. Davis Performing Arts Center, George Mason's Center for the Arts, and the University of Maryland's Clarice Smith Performing Arts Center just four of the more recent additions.

With all of this tempting entertainment to distract you, one thing you don't necessarily have to worry about is bankrupting yourself with your cultural pursuits: one of the best kept secrets in Washington (until now) is that the city has a half-price ticket office provided by the Cultural Alliance of Greater Washington. You can find discount tickets for upcoming performances at 407 Seventh Street NW (www.cultural-alliance.org/tickets/today.html, Metro: Gallery Place and Archives). If you are doing research at the National Archives, several Smithsonian research libraries, the Library of Congress, or the Folger Shakespeare Library you can walk to the ticket office on your lunch break.

What's on During the Annual Meeting?

Early January is a relatively quiet time for local theaters, but there are still some shows to see. The Foundry Theatre's The Brothers Size, a new play by Tarell Alvin McCraney, opens January 3 at the Studio Theater (1501 14th St., NW; 202-332-3300, www.studiotheatre.org, Metro: Dupont Circle or U Street/Cardoza). Two plays by Christopher Marlow, Tamburlaine and Edward II, will close on January 6 at the brand new Harman Center for the Arts, home of the Shakespeare Theater Company (610 F St., NW, 202-547-1122, www.shakespeare dc.org, Metro: Archives or Gallery Place). If musical theater is your thing, you can enjoy the musical, Twice Upon a Time: Dr. Seuss' The Lorax and The Emperor's New Clothes at Imagination Stage (4908 Auburn Ave., Bethesda, 301-280-1660, www.imagination stage.org, Metro: Bethesda). Monty Python's Spamalot will close at the National Theatre on January 6 (1321 Pennsylvania Ave., NW, 202-628-6161, nationaltheatre.org). You can catch the London touring production of My Fair Lady at the Kennedy Center (2700 F St., NW, 800-444-1324, www.kennedy-center.org). At the Arena Stage through February 24, you can see the regional premiere of Ella, a musical about Ella Fitzgerald (1101 Sixth St., SW, 202-488-3300, www.arenastage.org, Metro: Waterfront).

There will certainly be more productions and concerts to enjoy during the annual meeting—be sure to check the Washington Post's Friday Weekend section for a full listing of events, or visit Ticketplace.org for the best deals in town. If you can't tear yourself away from the AHA meeting to enjoy these cultural opportunities, remember to check out the music, dance, and theater scene the next time you come to Washington. Fortunately, most productions are at night so you will still find time for your research. And be sure to come back in the summer and enjoy some of our local seasonal treats—a free outdoor performance at the Carter Barron Amphitheater in Rock Creek Park, a Tuesday night choral sing-along, or a concert by the Navy Band at the Navy Memorial.

—Allison Games, Georgetown University, is a member of the Local Arrangements Committee