Editor's Note: This essay is the second in a series on the National Parks. See also "America's National Parks System: Sunset or New Dawn?" and "Remembering Repression: The GULAG as an NPS Exhibit."

From its creation in 1916, the National Park Service considered itself an educational institution. Its role as an educator began with the creation of small museums at places like Yosemite and Mesa Verde, and as the national park system grew, so did its educational methods and media as it developed more elaborate exhibits, films, and publications. For the most part, however, its interpretation of historic events focused on description rather than analysis or insight. This was especially true for Civil War battlefields as the NPS recognized early the sensitivity among southerners of a federal agency interpreting the Civil War in the South. In the 1930s, the National Park Service created an outside review process so that all interpretive scripts for the Civil War battlefields in Virginia were reviewed by Virginia's state historian, H. J. Eckenrode, and Douglas Southall Freeman, Robert E. Lee's reverential biographer and editor of the Richmond News Leader.1 NPS managers wanted to ensure that the causes of the war, especially issues related to slavery, remained outside battlefield interpretive programs.

The National Park Service continued its deferential approach to Civil War interpretation throughout the next half century. At the conclusion of the war's centennial in 1965, the NPS and the Virginia State Civil War Commission collaborated to produce a program on April 9, 1965, at Appomattox Court House National Historical Park. The concluding ceremony of the Civil War Centennial focused more on dedicating the reconstructed court house than on acknowledging the surrender of Lee to Grant or commemorating the death of the Confederacy. The historical vacuousness of the observance led Michael Kammen to observe: "The Virginia Commission and the Park Service somehow managed to extract a mythic Confederate moral victory from the facts of defeat, with histrionics and warped history as minor costs."2

Between 1933, when Franklin D. Roosevelt transferred the Civil War battlefields from the War Department to the Department of the Interior, and the late 1990s, the NPS avoided all mention of the causes of the war in its exhibits, films, and publications. Eighty years after the 50th reunion at Gettysburg in 1913, the agency still adhered to Governor William Mann's admonition that "we came here, I say, not to discuss what caused the war of 1861–65, but to talk over the events of the battle here as man to man."3 In a small exhibit inside Fort Sumter installed in 1995, the National Park Service first connected slavery with the coming of the war.

Three years later, battlefield superintendents decided, as the country approached the 150th anniversary of the war, that it was time the NPS began presenting the causes of the war to the visiting public. Once word of the meeting and its "radical" resolution became public, the National Park Service was inundated with approximately 2,400 cards and letters from the Sons of Confederate Veterans, members of Civil War Roundtables, and the general public who were motivated to write after reading incendiary articles claiming the NPS was "demonizing and slandering" the South with its "new" interpretation of the war. Many of these letters expressed the mistaken belief that the NPS was going to eliminate all military history from the parks and replace it with "some momentarily fashionable, politically correct, sensitive etc., ideology."4 Another correspondent believed that the park service should not "change history so that it is politically correct," while yet another objected to the battlefields being used as "South-bashing, hate-generating propaganda centers."

The anticipated interpretive apocalypse did not occur, of course, because (1) the decision to present the causes of the war was intended only as a preface to, and not to replace, the military interpretation of the battlefields, and (2) the Park Service worked closely with Civil War scholars to ensure that the enhanced interpretation conformed to current historical thinking about slavery and its role in the secession movement and war. The resulting exhibits and publications have been received almost without comment from those who had convinced themselves the National Park Service was engaging in "South-bashing." Indeed, the revised or new exhibits and publications clearly reflect the scholarship of secession over the past decade. The National Park Service also realized that using primary materials whenever possible carried more influence than quoting even the most highly regarded of Civil War scholars. Presenting the entirety of Mississippi's declaration of "Immediate Causes which Induce and Justify the Secession of Mississippi," for example, in the new interpretive center at Corinth, Mississippi, brought visitors, even skeptical visitors, face-to-face with the words and ideas of the secessionists themselves. The declaration's second sentence, "Our position is thoroughly identified with the institution of slavery—the greatest material interest in the world," speaks volumes about the motivations of those who engineered Mississippi's secession in January 1861.5 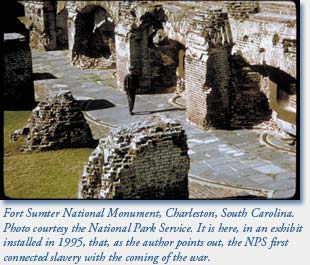 American slavery is perhaps the most hotly debated (and misunderstood) historical subject currently discussed in public. The intensity of the debate reflects the continuing power of the Lost Cause interpretation of the war. Constructed in the decades following the war and popular even among professional historians during the first half of the 20th century, the Lost Cause interpretation has been refuted by scholarship over the past 50 years. While no longer accepted by historians, this interpretation, which cleanly separated the issues of slavery from the more palatable cause of "States Rights," retains much of its power among a large portion of the American public. Any suggestion in a museum exhibit, or historic site interpretive program, or even a movie review, that slavery was "somehow" (to quote Lincoln from his second inaugural) connected to the causes of the war will prompt a public outcry.

The gulf between what historians know about the causes of the Civil War and what a large percentage of the public thinks about the causes of the war is large. The scholarship of the past five decades that places slavery at the center of the sectional controversy has been largely ignored or rejected by neo-Confederates as "revisionist history." The complexity and contentiousness of public conversations between historians and the public on the subject of slavery strongly suggest that historians, whether public or academic, should more actively seek ways to converse with the public on this volatile topic. Former presidents of the American Historical Association have stressed the need for all historians to engage the public in conversations about the past. Joyce Appleby ("Should We All Become Public Historians," Perspectives, March 1997) and James McPherson ("Putting Public History in its Proper Place," Perspectives, March 2003*) urged the readers of this publication to think and act beyond classrooms to engage the public in discussions about current historical thinking and about how history is produced.

The National Park Service has discovered that while a certain portion of the American public resists acknowledging the role of slavery in the coming of the Civil War, a larger percentage appreciate the directness and forthright interpretation that evolved from the 1998 meeting in Nashville. Engaging the tough subject of slavery has also made the NPS a better educational organization, and its interpreters better educators. Public spaces are ideal venues for the presentation of new and exciting historical information and interpretations. As a society, we cannot afford to let our federal agencies promote interpretations of the past that are no longer accepted by the scholarly community. We all have a role to play. Agencies like the National Park Service have an obligation to build strong and ongoing relationships with scholars and scholarly organizations and institutions, while scholars have an obligation to voice their concerns when they confront public interpretations of the past that are no longer historically correct and to offer their assistance to correct tired interpretive media.

Conversations about slavery in today's society are contentious precisely because understanding the role slavery played in American history is important to understanding today's society. If talking about slavery is difficult, we need to talk about it more, not less. Attending to the public's knowledge of slavery is a shared responsibility. Public historical agencies and scholars alike have parts to play in sharing with the public their excitement about the past and the seductive, and never-ending, pursuit of historical truth. Federal historians and academic scholars should aggressively seek opportunities to speak to public audiences. Addressing various publics is not only exciting, it makes us better historians. Hostile audiences force us to hone our speaking skills and choose our words even more carefully. Public history is not just for public historians. Academic historians, as Joyce Appleby and James McPherson have noted, also can feel the rush of being active in the public sphere. As a public historian for over 30 years, I can encourage you with deep experience, "Come on in; the water is fine!"

—Dwight Pitcaithley was chief historian of the National Park Service from 1995 to 2005.

*We regret that in the print edition, we incorrectly listed the month in which the James McPherson article was published; the correct date is March, 2003.