Getting Ready for Amsterdam: The Beijing General Assembly of CISH

It is a notable marker of the westward drift of world economic power from the Atlantic Basin to East and South Asia in general, and of the rapid emergence of China as an industrial super-power in particular, that the planning meeting for an international congress of historians scheduled for Amsterdam in 2010 should have taken place in Beijing. The parent organization of the congress is the International Committee of Historical Sciences, better known even to Anglophones by the more appealing acronym of CISH, from the French Comité International des Sciences Historiques. I attended the organizing meeting in Beijing (September 16–18, 2007), hosted by the Chinese Academy of Social Sciences (CASS), as the U.S. delegate by virtue of my chairing the AHA's Committee on International Historical Activities, ably seconded and advised by Executive Director Arnita Jones.

CISH, whose secretariat has for some years resided in Montreal, has been active for nearly a century, its raison d'etre the planning, organization, and execution of a large-scale, quinquennial congress (the last was in Sydney in 2005) drawing mainly historians, but also archaeologists and other historically oriented scholars of the human sciences, from around the world, though primarily, it seems fair to say, from Europe. Indeed, one of the issues under discussion by this General Assembly, attended by representatives of more than 30 national historical committees of the 54 currently subscribed member nations (among them Georgian, French, Japanese, Dutch, and even Kazakhstan historians) and internationally recognized specialist organizations (ranging from the International Federation for Research on the History of Women to the International Commission for the History of Travel and Tourism) is the minimal participation in the organization itself and its congresses of contingents from Latin America, Asia, Africa, and the Islamic world. To this observer, at least, the average age of the participants in the General Assembly appeared relatively high, the gender overwhelmingly male (by my quick count, only 11 of about 60 delegates were women).

The Sunday before the convening of the General Assembly was dedicated to an extremely interesting day-long symposium on the state of Chinese historiography, organized by the Association of Chinese Historians (ACH) and featuring some of the most prominent scholars in the country, who presented papers on topics ranging from new approaches in ancient Chinese history to the ways in which the post-Mao era is being treated in recent scholarship. Questions from the listeners on the issue of Taiwan produced gracious smiles and polite evasions among the panelists at one point, and the discussion in another panel of the recent kinder, revisionist approach to the history of the Kuomintang drew vigorous nods of approval and a quickened interest from the audience. The day concluded with a banquet hosted by the ACH in the lovely venue of a centuries-old imperial observatory near the CASS installations where the meetings were held.

Monday's session of the General Assembly was devoted to reports from the secretariat that touched upon CISH's continuing vitality despite the organization's relative poverty (its UNESCO subsidy has steadily declined, since it is seen by the U.N. as an elitist organization meriting less support than basic literacy programs around the world); the financial burdens attendant upon publishing selected congress papers in the CISH Bulletin; the local arrangements for the 2010 Amsterdam congress, which make the meeting sound extremely attractive; and so forth.

The lively Tuesday morning session focused exclusively on the approval of the three major themes, 15 roundtable sessions, and several joint sessions (with other historical organizations) culled by a subcommittee of the permanent Bureau from among the scores submitted for consideration since the Sydney congress by national and specialist committees (the AHA included); the list appears in the online version of Perspectives (www.historians.org/Perspectives/issues/2007/0710/0710cish.cfm) along with information about submitting proposals for the 2010 Congress to the Committee on International Historical Activities, which will vet the proposals and forward a select group to CISH. An interesting insurgency developed during these discussions by the international committee on women's history, suggesting that one of the three major themes be devoted more explicitly to the history of women and gender or, failing that, the inclusion of more such themes among the roundtables; the first of these (supported by the AHA delegation) failed to gain approval, while the second did go through. 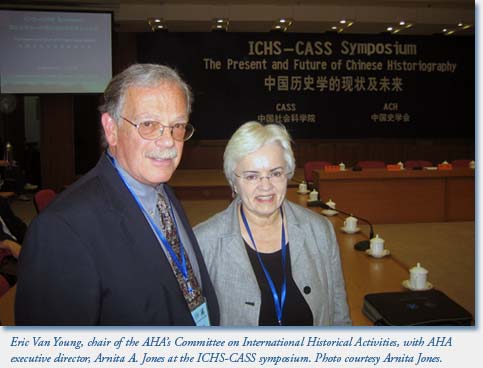 Of particular interest to historians in the United States may be the debate surrounding a recent European Union Framework resolution criminalizing Holocaust denial or the gross trivialization of cases of genocide. The Bureau of CISH put before the General Assembly a resolution expressing concern about this on the part of historians as possibly chilling the freedom of historical investigation, and suggesting that it be further discussed at the 2010 Amsterdam meeting. We (Arnita Jones and I) dissented from this approach, finding it too weak in its protection of the freedom of historical inquiry, and I asked to read into the record of the debate a statement (written by Anthony Grafton—the vice president of the AHA's Professional Division—and recently adopted by the AHA's Council as the organization's official position) strongly condemnatory of the Framework resolution. Remarkably little debate followed among the delegates, and when the vote came there were seven negatives (among them our own and that of the representative of Britain's Royal Historical Society) and a number of abstentions, but a strong majority in favor of the proposal. Several delegates, in private conversation, expressed interest in having copies of the AHA document while noting that Americans seem obsessed with free speech issues. Speaking for myself, and acknowledging that the European experience of the 20th century makes for different attitudes toward such issues, I should make clear that my own vote against the bureau's reasonable but, it seems to me, weak resolution, was prompted not by what was in the document, but what was not in it; that is, a mechanism for coming to some conclusion without endlessly extending discussion.

All in all the CISH General Assembly meeting was engaging both intellectually and culturally, and the planning for the Amsterdam congress promises a scholarly event of high interest. Indeed, I join with Arnita Jones (see her essay touching on various aspects of CISH) in encouraging AHA members and other historians in the United States to send in proposals (by December 15, 2007) for participation in the Amsterdam congress. As mentioned earlier, the details about the procedures for submitting proposals are available online at www.historians.org/Perspectives/issues/2007/0710/0710cish.cfm. Readers interested in knowing more about CISH can visit the CISH web site at www.cish.org.

—Eric Van Young (Univ. of California at San Diego) is chair of the AHA's Committee on International Historical Activities.