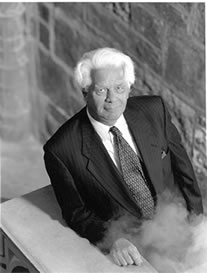 Born in a suburb of Cleveland, Ohio in 1931, Raymond McNally received a Jesuit education at St. Ignatius High School, where he distinguished himself as a musician and student. The latter attribute earned him a scholarship to Fordham University. Initially a French major, he spent his junior year abroad living with a Russian family while studying at the University of Paris. He returned to America with a newfound interest in Russia.

After graduating from Fordham with highest honors in 1953, he was awarded a Fullbright Scholarship to study at the Free University of Berlin, where he pursued his doctoral degree. During that time, he specialized in 19th-century Russian intellectual history under the tutelage of Werner Philipp. His research culminated in 1956 with the publication of his dissertation, “Das Russlandbild in der Französischen Publizistik Zwischen 1814 und 1843.” Upon returning to the United States, McNally taught at John Carroll University in Cleveland for two years. In 1958, he began his career at Boston College, where he taught until he retired in 1999. Within the field of Russian intellectual history, McNally was a particular authority on the liberal intellectual Peter Chaadayev, an edition of whose major works McNally published in 1969. In 1971 he published Chaadayev and His Friends: An Intellectual History of Peter Chaadayev and His Russian Contemporaries.

McNally’s keen interest in classic horror literature and films, in particular the 1931 version of Dracula and the Bram Stoker novel on which it was based, led him next to investigate Dracula as an historical figure. The outcome of this inquiry was In Search of Dracula, co-authored with his colleague, Radu Florescu. A number of other Dracula volumes followed, including Dracula: A Biography of Vlad the Impaler, 1431–76 (1974) and Dracula: Prince of Many Faces (1989). More recently, he and Florescu published The Strange Case of Dr. Jekyll and Mr. Hyde. At the same time, McNally continued to give papers and publish articles on Chaadayev and his circle as well as on other aspects of Russian intellectual history.

A colorful and dynamic teacher, McNally acquired a broad following among students, both for his mainstream courses on Russian and European history and his more deliberately popular courses on Terror and Horror. His seminar in Russian intellectual history and his thesis direction enriched the preparation of several graduate students who went on to make important contributions to the field.

In addition to his roles as professor and mentor Raymond McNally founded in 1964 and headed the Russian and East European Center at Boston College, and in 1995, with the late Donald Carlisle, established the Balkan Studies Institute, housed at Boston College. His academic pursuits were complemented in the 1960s and 1970s by political activism and community service. An outspoken opponent of the war in Vietnam and of the military dictatorship in Greece, he also served for 12 years on the town of Brookline school committee and on the Democratic State Committee of Massachusetts.

With a keen sense of humor and an ebullient personality, Ray McNally was much liked by both his students and his colleagues, who will miss him. He is survived by his wife, Carol, and five children.