The June issue of the American Historical Review features an “AHR Exchange” on the impermanence of class rule. Jonathan Dewald (Univ. at Buffalo) takes up the question of why ruling classes fail, with a reconsideration of the example of the French Revolution. Can a class, secure in its power and legitimacy, suddenly be swept from the scene by revolutionary transformation? In “Rethinking the 1 Percent,” Dewald argues that, in fact, the French nobility’s social and economic position in the 18th century was much weaker than has been suggested in recent historical writing. For a century prior to the upheaval of the 1770s, he points out, nobles’ landed revenue fell, and in the last generation before 1789, they sold a significant amount of property. Over the same period, the state reduced its support and increased its demands. Partly as a result of these financial and political pressures, the nobility’s numbers shrank over the 18th century. These changes, Dewald insists, help explain the nobles’ inability to control events as the revolutionary crisis unfolded after 1789.

Dewald’s argument is engaged by three scholars—two French historians and a historian of China. The latter, Nicolas Tackett (Univ. of California, Berkeley) considers the questions raised by Dewald by applying them to his own research area, medieval China’s Tang dynasty (618–907 CE). Tackett proposes conceptualizing the elite not merely as a static social class, but rather as a network of families better positioned than any other group to survive the erosion of institutions that once offered protection, the emergence of rival elites, and even the development of a revolutionary social movement. In medieval China, Tackett maintains, the eventual demise of the aristocracy—like that of many elites in world history—came as a consequence not of revolutionary change but rather of catastrophic violence spanning two decades at the turn of the 10th century.

Timothy Tackett (Univ. of California, Irvine), a distinguished scholar of the Old Regime, the Revolution, and the Terror, offers his own reactions to Dewald’s article. While underlining the importance of Dewald’s synthesis of recent research on the socio-economic evolution of the French nobility, he questions how helpful it is in explaining the putative “collapse” of the nobility in 1789 or the “framing” of the early Revolution. Most tellingly, Tackett wonders if “the French of the late eighteenth century—or any people in any period—assessed their situation in terms of multi-secular economic trends, or whether they viewed the world above all on the basis of what had transpired in their own and perhaps their parents’ lifetime.” Finally, Gail Bossenga (Elizabethtown Coll.), a scholar of the Old Regime, argues that deep entanglement with—and dependence on—the state made the nobility vulnerable when war and financial crisis made their privileges unsustainable.

The “AHR Exchange” is accompanied by three research articles that consider 20th-century internationalism. In “Communicable Disease: Information, Health, and Globalization in the Interwar Period,” Heidi J. S. Tworek (Univ. of British Columbia) explores globalization through a study of the interwar League of Nations Health Organization (LNHO). Tworek uses the relatively late development of the international health network to show how and why information globalized at a different pace than migration and trade. In a period of intensified nationalism, the LNHO organized an infrastructure based on new ship-to-shore wireless technology around colonial networks and port cities. Tracing such infrastructures, Tworek contends, can help historians overcome artificial divides between the national, international, imperial, and global.

David Motadel (London School of Economics), in “The Global Authoritarian Moment and the Revolt against Empire,” looks at the same era, but from a different angle. His article sheds light on the history of anti-imperialism in the 1930s and 1940s, when global authoritarianism was surging. In particular, Motadel looks at the evolving relations between anticolonial nationalists and the Nazi regime. Wartime Berlin, Motadel claims, became a hub of global anti-imperial revolutionary activism. German officials worked to catalyze anti-imperial movements, reaching out to subjects of the British and French empires and minorities of the Soviet Union. We tend to imagine exile politics as inherently internationalist and progressive. But Motadel’s research illuminates a countertendency: interwar anticolonial nationalists, in search of an alternative to (Wilsonian) liberalism and socialism, turned to the rising authoritarian states that stood for the primacy of the nation and a new world order based on ethnonationalism, not multiethnic empires.

Finally, Abdel Razzaq Takriti (Univ. of Houston), in “Colonial Coups and the War on Popular Sovereignty,” takes us into the postcolonial struggles for sovereignty in the Gulf States of the Middle East. He finds that the perpetuation of imperial power rested on “colonial coups” in Sharjah (1965), Abu Dhabi (1966), and Oman (1970). These transfers of power, Takriti argues, depended far more on British machinations to favor one group over another than they did on internal power struggles.

The June issue also includes two contributions, both dealing with questions raised by the postcolonial experience, to our new “History Unclassified” section. In the first, Thomas Meaney (Max Planck Society in Göttingen) reconstructs a missing link in Frantz Fanon’s life and death. Based on his exclusive interview with C. Oliver Iselin, the CIA agent who oversaw Fanon’s hospitalization in the United States in 1961, Meaney’s essay suggests that Iselin’s memories of decolonization reflect the wider arc of how American attitudes evolved and congealed toward the Third World. The second “History Unclassified” essay, by Rachel Gillett (Utrecht Univ.), offers her personal account of singing in a concert of restored Napoleonic music. Even while offering a reminder that the past can be “made audible,” Gillett notes her growing discomfort with the imperial implications of “proclaiming Napoleon’s greatness and glory.”

Finally, in addition to our regular array of featured reviews, the June issue also includes a set of reflections about the fascinating recent documentary film Bisbee ’17. In 1917, the isolated Arizona copper-mining town of Bisbee became the site of a radical strike and subsequent vigilante roundup of over 1,000 strikers and their supporters, who were then “deported” to the New Mexico desert. Filmmaker Robert Greene revisits this event by interviewing the descendants of Bisbee residents on both sides of the barricades, and by asking his interlocutors to reenact this signal event in their community’s history. The result, as the five scholars who consider Greene’s achievement show, is an unusual visual meditation on the intersection of memory, history, violence, and community. 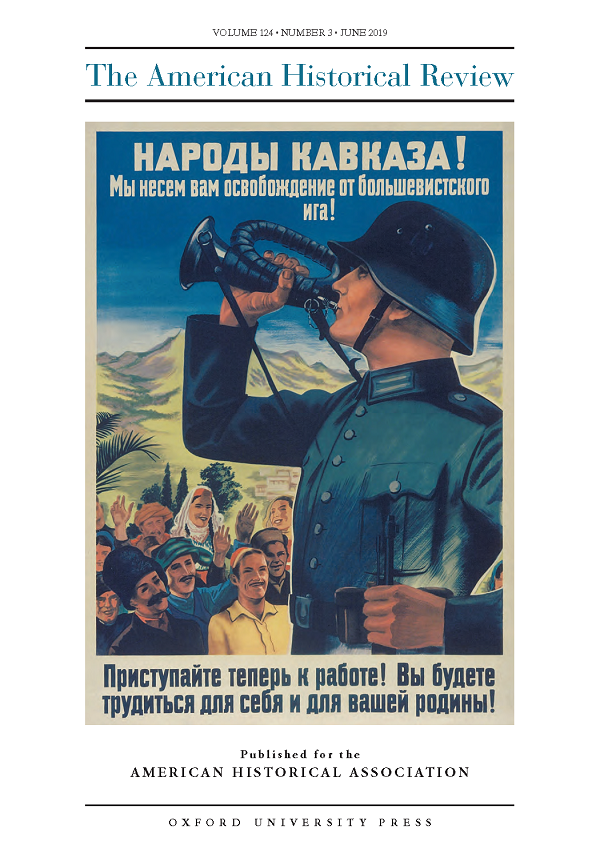 “Peoples of the Caucasus! We liberate you from the Bolshevik yoke!” (top). “Start working now! You will work for yourselves and your homeland!” (bottom). This 1943 German propaganda poster depicts a cheerful, ethnically diverse group of Caucasians in local attire being “liberated” by the German army, visualized as a Wehrmacht soldier blowing a bugle. As German troops marched into the Caucasus, these posters were put up across the region to win over the local population. The Germans spread similar propaganda across Central and South Asia, Africa, and the Middle East, promising national self-determination and postwar sovereignty in an effort to mobilize national liberation movements against the Allies. In “The Global Authoritarian Moment and the Revolt against Empire,” David Motadel traces the paths of nationalists from the Global South who turned to Hitler’s regime during the war years. At the height of the conflict, scores of these revolutionaries flocked to Germany, among them Indians, Arabs, and Central Asians, forming a nationalist international against the old world order. German Federal Archives, Image Plak 003-040-027.

Alex Lichtenstein is editor of the American Historical Review. His most recent book, co-authored with his brother, photojournalist Andrew Lichtenstein, is Marked, Unmarked, Remembered: A Geography of American Memory (2017).