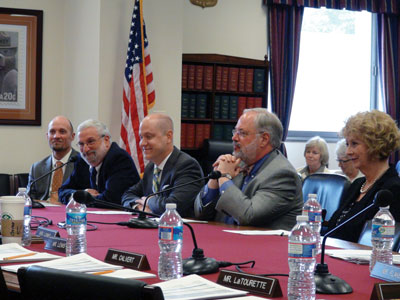 American Historical Association Executive Director James Grossman testified on March 22, 2012, before the House Committee on Appropriations' Subcommittee on Interior, Environment, and Related Agencies. Speaking on behalf of the AHA and the National Humanities Alliance, Grossman joined several other humanities advocates to urge the subcommittee to provide no less than $154.3 million to the National Endowment for the Humanities (NEH) for fiscal year 2013. This represents a small increase over the 2012 appropriation, and was the same amount requested by the Obama administration.

Grossman told the subcommittee that the current level of support going to NEH was "akin to plowing under our seed corn," as young scholars find themselves unable to complete the research that goes into the books that launch academic careers. This has wide implications, Grossman argued. Without an understanding of our own heritage, those of other nations, and of foreign languages, he stated, "We can neither formulate informed foreign policy or even military strategy, nor compete in a global marketplace." (See an edited transcript of the oral testimony offered by Grossman. The written testimony that he also submitted is available online at http://blog.historians.org/file_download/49.)

The subcommittee also heard testimony from Deborah Tannen, university professor in the department of linguistics at Georgetown University. Tannen told the subcommittee of how, when she was an assistant professor making $17,000 a year, a small NEH stipend of $2000 meant the difference between a summer of research and a summer of scrambling for a salary. She continued to describe how an NEH grant of $3,500 funded a program that demonstrated "the wide appeal of a linguistic approach to understanding communication between men and women," and led to her runaway bestseller You Just Don't Understand: Women and Men in Conversation. Tannen emphasized that she and many other recipients of NEH funds at critical points in their career paths now serve as volunteers on NEH panels and judge applications, "thus making a donation of untold hours" and enhancing the "comparatively modest investment made by American taxpayers."

Hunter R. Rawlings III, the president of the Association of American Universities, told the subcommittee about the NEH's Bridging Cultures Initiative, a program "designed to renew and reinforce the bridges between the different cultures and viewpoints that are part of the fabric of American life." With sufficient funding, he continued, the NEH would be able to take proposals for themes like "Becoming American" and "Connecting Local to Global: History of Trade, Migration, and the Movement of Ideas." Rawlings pointed to how these initiatives are directed at a wider goal of "improved civil discourse." The AHA is a partner with the NEH on a Bridging Cultures program, "Bridging Cultures at Community Colleges."

Speaking about the impact the NEH has at the state and local level, Paul Ulrich, board member of the Wyoming Humanities Council, described family literacy programs, bilingual education programs, civic discussion programs, Native American forums, services to K–12 schools, support to Main Street museums, and resources to local libraries, all funded by state humanities councils with support from the NEH. "By partnering with over 9,800 local organizations, the councils achieve a five-fold return on their federal funding," Ulrich told the subcommittee.

Allen Mikaelian is the associate editor of Perspectives on History and the AHA's media relations coordinator. This article has been adapted from a blog post of March 22, 2012 on AHA Today.