History E-books May Be Good for Reading, but Not (Yet) for Reviewing

Are historians ready to receive e-books for reviewing purposes? A survey of AHA award committee members suggests the answer is "not yet."

Publishers seem ready, and in some cases eager, to start sending e-books for review. Staff at almost a dozen publishers I consulted over the past two months noted the potential for significant savings in printing and postage costs. Moreover, most of them had invested in new technologies to make it simple and easy to direct e-book copies to designated reviewers—though a number of small- and medium-sized presses were still wrestling with different technology options.

But the members of AHA award committees strongly resisted the idea of e-books for review. In a survey of 101 members selected to read books for AHA prizes over the past four years, more than two-thirds (68 percent) of the respondents said they had no interest in receiving electronic copies (see Figure 1). Only 8 percent said they would prefer to receive copies in electronic form, while 23 percent indicated they might be willing to receive the books in digital form.

Figure 1: Importance of Interaction with Physical Books on Willingness to Accept E-Books for Review 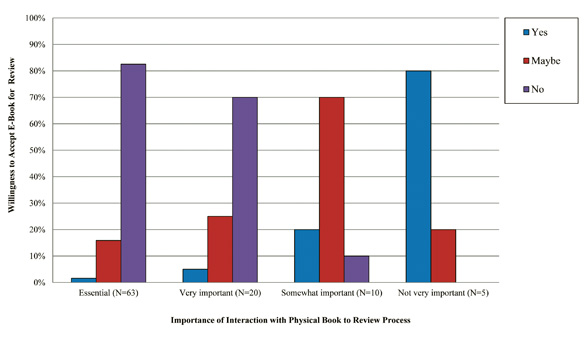 The members of these committees are more senior than the membership as a whole, as all have at least one published book to their credit. But they are carefully selected to be representative of the discipline across a range of other demographic and intellectual categories, so their responses do seem representative of an important segment of the history profession.

The respondents are not wholly negative about the notion of e-reading, as 62 percent of them reported that they currently read e-books in some form. Among the committee members, the Kindle platform seems the most popular for e-book reading, as it was selected by a third of our respondents. This was followed by the iBook reader (selected by another 23 percent), while a variety of lesser-known readers accounted for the rest.

The committee members made it clear that they are increasingly happy to use e-readers for casual reading, but that e-books fail to facilitate their current methods for reviewing texts. Fully 64 percent of them said "interaction with a physical book" is "essential" to their reviewing process, and another 20 percent indicated it was "very important." Only 5 percent of the respondents said it was not important at all to them. Not surprisingly, only the latter group (five respondents in all) seemed particularly receptive to receiving e-book copies.

The survey also asked respondents to describe their current procedures for review, and, 82 percent indicated they regularly write in or physically mark the print volumes that they review. For instance, 38 percent indicated they always or usually write in the margins of the book, almost 32 percent use Post-it notes to mark sections for further reference, and 29 percent reported that they like to underline in their copies (Figure 2). 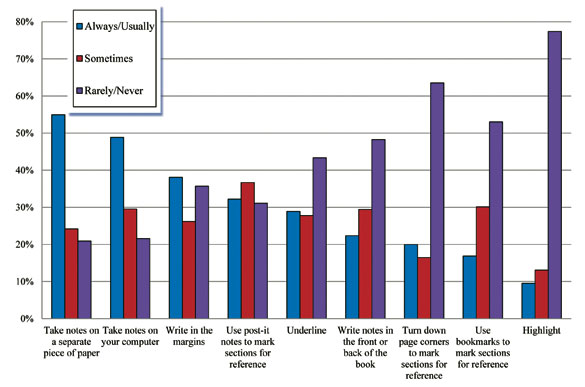 The current technologies allow readers to highlight and add comments to electronic books, but the survey respondents clearly indicated that these provide an inadequate substitute. As one respondent observed, "I want to see the book and easily flip from the text to the notes and references. I don't enjoy reading electronically and given the number of books that we are required to read I prefer to have the book in my hands so that I can mark up the important passages and arguments."

The respondents offered a number of reasons for preferring print to electronic publications for review. For the initial reading and assessment of the book, a number of respondents said they found paper much easier to "skim" than the electronic copies. And for more in-depth reading, the respondents with some e-reading experience regularly cited the limitations of links between notes and citations in scholarly texts. Others worried about how e-books might hamper the writing of reviews or summarizing results. One respondent indicated e-books might be an adequate substitute for print, but only "if it allowed highlighting and copying phrases or a paragraph at a time to transfer to notes."

Finally, more than a third of the respondents (36 percent) said they viewed the free copies of books they received as an important benefit of their service. Even though a number of respondents indicated that the number of paper copies they receive could be a significant burden on their bookshelves, quite a few of them said they keep the best books for future research and teaching, and give the rest to their university libraries or students.

We will continue to monitor member interest in the use of e-books for review on the award committees, but the responses to the survey indicate that this will not be a pressing concern in the near future (except for books that only exist in a digital format). And the publishers do not seem inclined to hurry us along. None of the publisher representatives I consulted seem inclined to make e-book copies mandatory for review. In the meantime, they and we will be working out the necessary procedures to deliver e-books at some point in the future.

Robert B. Townsend is the AHA's deputy director.