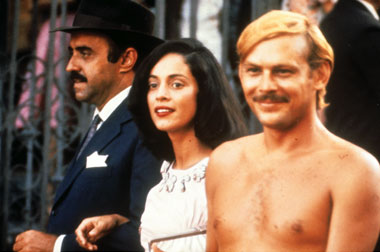 Few films manage to capture and communicate images that sum up a nation's identity at a particular historical moment. Bruno Barreto's Dona Flor and Her Two Husbands brilliantly conveys a vision of Brazilian culture and identity in the 1970s at the very moment this vision's power peaks, and then begins to decline.1 Through its phenomenal international box office success, the film sells to the rest of the world this alluring and compelling vision. Until very recently, Dona Flor was the highest-grossing Brazilian film of all time, primarily because of its success overseas. The film has been a very powerful influence shaping the way tens of millions of Brazilians and non-Brazilians "imagine" Brazil. Filmed on location in Salvador da Bahia (on the northeastern coast), Barreto's cinematic version of Jorge Amado's 1966 novel portrays a Brazil profoundly shaped by centuries of cultural and racial mixture (mestiçagem), primarily of Portuguese and African peoples. The film and the novel brilliantly capture this vision of mestiçagem through Bahia's food, religions, carnaval, and race relations. At the center of this vision of Brazilian culture and identity is the mulata, the light-skinned, racially mixed beauty who (in this vision) epitomizes the luxuriance and sensuality of Brazilian mestiçagem. The film consolidated (especially for international audiences) the image of this sexy mulata at the center of Brazilian culture, and the actress Sonia Braga as the iconic symbol of the Brazilian mulata.

In 20th-century Brazil, the most important national myth, what the anthropologist Roberto DaMatta has called the "fábula das três raças" (the tale of the three races), has been Gilberto Freyre's exuberant and optimistic vision of mestiçagem—that all Brazilians share a history of racial and cultural mixing of Native Americans, Africans, and Europeans.2 Before the publication of Freyre's monumental The Masters and the Slaves (Casa-grande e senzala in the Portuguese original) in 1933, many Brazilian and foreign intellectuals had recognized this mixing but very few viewed mestiçagem favorably.3 By the 1970s and 1980s, nearly all Brazilians, at some level, shared this belief—it had become something of a "master narrative of Brazilian culture."4 The literary works of Amado, and the films based on his novels, became some of the most important vehicles for crystallizing and communicating this Freyrean vision of mestiçagem in the 1960s and 1970s.

As the film opens, Vadinho, the bon vivant husband of Flor, drops dead on the streets of Salvador surrounded by his fellow carnaval revelers. As Flor (played by Sonia Braga) grieves over the coffin of her departed husband, the pre-Lenten carnaval festivities continue outside the wake on the streets of Salvador. Much of the first half of the film flashes back through their life together and we see how much Flor loved Vadinho's sensuality and lovemaking, but fought with him constantly over his gambling, womanizing, and drinking. Vadinho is the iconic malandro in Brazilian culture, the clever but always morally dubious rogue. In the second half of the film, the dull but respectable local pharmacist, Teodoro, courts and marries Dona Flor. The ghost of Vadinho reappears, visible only to Flor (most of the time in the nude), and mocks the pathetic lovemaking of the tendentious and boring Teodoro. As she succumbs to the passionate sexual advances of the phantom Vadinho, Dona Flor eventually realizes that she has the best of both worlds, the sensual and torrid lovemaking of her malandro first husband, and a bourgeois life as the wife of her bland yet respected second husband. In the final scene, Dona Flor leaves her house and heads down the streets of Salvador with the elegantly dressed Teodoro on one arm, and the completely nude Vadinho on the other.

In retrospect, Barreto's film is something of the culmination of a decades-long process of projecting the power of Freyre's myth of mestiçagem aurally and visually across all of Brazil and overseas. Film and music propelled images and sounds of Brazil onto a global stage in the 1950s and 1960s, bringing this vision of mestiçagem to all Brazilians and the world. Carmen Miranda in the 1940s, and bossa nova in the late 1950s and early 1960s helped forge an international image of Brazil as an exotic and culturally rich land. The novels of Jorge Amado (1912–2001) provided the most potent and enduring images of Freyre's myth of mestiçagem and the sensual mulata in the decades after 1950. The images Amado created in print were translated to the screen—small and large—and his literary image of the sensual mulata was brought to life in the work of the alluring Sonia Braga on television and in film. Amado was a native of Ilhéus in southern Bahia, and nearly all of his novels (some two dozen) are set in the northeast, often in the city of Salvador, nearly universally viewed as the touchstone of African influence and culture in Brazil. His work, in many ways, is a window into the mulatto soul of Brazil. As Amado himself once said, "It's enough to see a mulata walk on the beach or down the street to understand the mysteries of mestiçagem, cultural syncretism, and a certain national specificity."5

Amado's work takes the imagery of mestiçagem to a vast public in Brazil (and abroad), through his record-breaking book sales in the decades after 1958, and then through the media of television and cinema. In Gabriela, cravo e canela (Gabriela, Clove and Cinnamon, 1958), Dona Flor e seus dois maridos (1966), and Tenda dos milagres (Tent of Miracles, 1969)—to cite the most notable examples—Amado paints a vision of Brazil that brings to life in fiction the very essence of the Freyrean vision of mestiço nationalism in the tropical setting of Salvador da Bahia. Amado's Bahia, with its sights, sounds, smells, and tastes (and its sensuality), became the archetype for many as the most Brazilian of Brazilian regions. As Amado became the bestselling author in Brazilian publishing history (at home and abroad), his imagery—especially of the sensual mulata—became by the 1980s some of the most pervasive and potent imagery in both the imaginário nacional and internacional. The translation of Gabriela into many languages quickly made it the best known Brazilian novel of all time.6 In Brazil, the telenovela version of Gabriela (1975) and the film version of Dona Flor consolidated the image of this sexy mulata at the center of Brazilian culture and Sonia Braga as the iconic symbol of the mulata.

Many critics have noted the profound irony of the impact of the small and big screen versions of Gabriela and Dona Flor and their star attraction. Much like Carmen Miranda in the 1930s and 1940s, Braga is white by Brazilian standards—that is, very light-skinned. While Miranda donned the traditional costume of the black Afro-Brazilian women of Bahia and made the sounds of samba a national and international pillar of Brazilian culture and identity, in the 1970s Braga darkened her skin through makeup and tanning and rose to international stardom as the emblematic Brazilian mulata. After viewing her performances Jorge Amado himself declared her the living and breathing epitome of the Brazilian mulata.

In retrospect, the hold of Freyre's vision of mestiçagem peaked in the 1970s and 1980s and Barreto's film, in effect, crystallized this luxuriant, tropical, sensual vision just before it began to come under powerful attacks from the emergence of Afro-Brazilian movements that rejected Freyre's vision as racist and wrongheaded, and intellectuals who declared any form of "national identity" an elusive fiction. Although surveys continue to show that the vast majority of Brazilians continue to hold to the notion that they are a people defined by cultural and racial mixture, the resonance and hold of Freyre's vision of mestiçagem has continually declined over the past generation as Brazilians have engaged in an increasingly contentious debate over the nature of race relations. Those who continue to hold to this myth see a Brazil fundamentally different than those who believe that the myth obscures a history of racial discrimination and inequality. As the debates over Brazilian identity have intensified and (to some extent polarized) Brazilians, it would be very hard today to produce a film comparable to Dona Flor in its ability to capture and communicate so effectively a single vision of national identity. Whatever one might think of the Freyrean vision of mestiçagem, Bruno Barreto and Sonia Braga created an iconic film that provides us with an unforgettably sensual cinematic image of the most powerful myth of Brazilian identity in the 20th century.

Marshall Eakin is professor of history at Vanderbilt University. He is the author of, among other books, Brazil: The Once and Future Country and Tropical Capitalism: The Industrialization of Belo Horizonte, Brazil.