... and Other Primary-Source Video Sites on the Internet

In my experience, movies have a bad reputation in the classroom. Many teachers, myself included, tend to schedule period-long films on the days that they can't be in class for some reason. Therefore, many students interpret a movie screening as a signal that they don't have to pay attention that day. Most educational documentaries, while often worthy and impressive efforts, simply aren't made to fit the parameters of a single class period.

This situation is the natural result of using films in videotape or DVD formats. Showing relevant clips from longer movies is either technologically infeasible or just very cumbersome. However, now that broadband and other kinds of high-speed internet access are common in classrooms at all levels of the American educational system, history educators can readily access film clips posted on the World Wide Web from classroom computers. Educational documentaries are commercial products, and therefore seldom available on the Web free of charge. However, many primary-source historical film clips are available for nothing to anyone with a Web browser. Undoubtedly, the largest collection of such clips is available on YouTube.

Even if you've never visited YouTube before, you've probably read or heard about it. It's the web site on which a fictional character named "Lonelygirl15" became an internet sensation and where hundreds of thousands of people went to watch a guy scream, "Leave Britney alone!" while crying under a blanket. However, YouTube also contains a treasure trove of primary-source historical video for those teaching the history of anywhere in the world from the invention of motion pictures about 110 years ago up to the present. 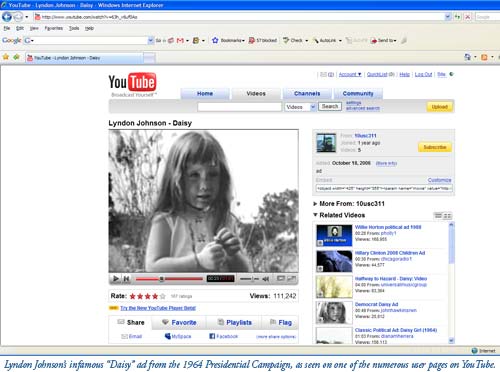 Thanks to YouTube, I have been able to show film clips to my students that I had talked about in class for years, but never had the ability screen before. To cite a few examples, the infamous "Daisy Ad" from Lyndon Baines Johnson's 1964 presidential campaign is on YouTube. So is Lucy and Ethel wrapping chocolate in a candy factory (a scene I've often invoked with respect to both television in the 1950s and as an illustration of the "speedup" in labor history classes). A two-minute clip from John Ford's movie, The Grapes of Wrath depicting an eviction is an excellent way to illustrate the plight of sharecroppers during the Great Depression. Rather than talk about the birth of rock ‘n roll, I can now play a clip of Elvis Presley's first single, "That's All Right Mama" put together by a fan with pictures of young Elvis displayed on the screen. Indeed, YouTube is particularly good for watching all kinds of musical performances from opera to Rock.

Consulting with a colleague of mine, I quickly found a series of other clips that would be of use in world history classes: Einstein explaining the theory of relativity (in English), a newsreel announcing Mussolini's execution (which includes footage of the firing squad doing its work), a 1917 speech by Lenin, and a collection of file footage depicting Mao Zedong at various stages of his career. Since YouTube is used by people all over the world, not all sites of interest to world history teachers are translated into English, but since one can always turn the sound down and explain the significance of the images on screen as they appear, this might not matter.

The fact that most of the content on YouTube comes as clips is perhaps the best thing about it besides the available selection. Although I have seen some films that run as long as an hour, most YouTube clips are under 10 minutes long. This means that it is possible to stop a lecture for just a brief period of time, show the clip and either discuss with students what they just saw or explain its significance yourself without losing much time from your presentation. I favor using primary-source clips rather than available fragments of documentaries because historic film stands on its own as an instructional tool. Since primary-source clips are usually self-contained, I don't have to waste time explaining the context from which they came. (Although if those teaching the history of any period before the invention of motion pictures want to use YouTube in class, they obviously have no choice but to use secondary clips.) It has become a cliché to suggest that some students are visual learners. Brief primary-source film clips can benefit learners of all kinds through their explanatory power without taking too much time from other kinds of instruction.

What separates YouTube from other sites with historical footage available is not just the ability to post movies of your own (which is not a prerequisite for using the site), but the fact that you cannot download clips from YouTube onto your computer for viewing independent of the site. As its help page explains, "YouTube's video player is designed to be used within your browser as an Internet experience." However, to access YouTube videos quickly, you can embed them on a blog or a web page or keep the URL handy for direct access. If you register with YouTube (which is free), you can set up your own playlist of videos. You can also do what I do, which is to mark the videos I want to use in class as "favorites." Before class, I then call up my "favorites" page on the classroom computer screen. From there I can see pictures and descriptions of each clip and play them with a single mouse click.

Of course, the main problem with using the Web for anything is that the information you use today may not be available to you tomorrow or next month or especially 10 years from now. This is certainly true with YouTube. I have been using the site for about a year now and already some of the clips I have used in class are no longer available. The company, now owned by Google, has faced several lawsuits over its brief history from media firms seeking compensation for uncompensated use of their copyrighted material posted by YouTube members. So while users should be aware that removal of films from YouTube is always a possibility for a variety of reasons, I am unaware of any such lawsuits being provoked by historical footage. In fact, YouTube's user agreement specifically puts the onus on copyright holders to prove they own the rights to a particular clip before YouTube will take it down. So while clips from a documentary taped off of TV last week might disappear by the time you want to use them next semester, most of the primary source clips on YouTube that historians would find useful are a pretty safe bet to stick around for a while. Even if they disappear (as did the first version of the Lucy and Ethel clip I put in my favorites file), there are often multiple versions of popular clips you can use (as there was with Lucy and Ethel). I also subscribe to the favorites lists of other users who post useful historical content. "Universal Newsreels," for example, is nothing but Universal Newsreels, including the Mussolini video described above.

YouTube is certainly not the only place to find primary-source video clips on the internet, and for some periods of history it is not even the best. Easily the best selection of readily accessible early silent films is at the Library of Congress. Its motion pictures are spread over a number of collections and posted on the Web as part of the library's American Memory project. These collections include "Edison Companies, Film and Sound Recordings," "Early Films of New York City," "Work and Leisure 1894–1915," "The Coolidge Era and the Consumer Economy," and "The Variety Stage, 1870–1920." My favorite clips for classroom use include sequences showing a crowd on Lower Broadway in New York City from 1903, the arrival of immigrants at Ellis Island in 1906, and a promotional film for an electric refrigerator from the Electrical League of Pittsburgh c. 1926. As the earliest silent film clips tend to be only two or three minutes anyway, they are perfect for not taking too much time from a lecture. Indeed, since they're silent, teachers can provide commentary as they play.

Another excellent source for movies is the Prelinger Archives. This collection, which is actually owned by the Library of Congress but available at a different URL, includes 60,000 films described by the curators of the site as ephemera: advertising, educational video, government shorts, and so on. My favorite film from this collection is a short promotional film for Franklin Roosevelt's National Recovery Administration starring Jimmy Durante. Many of the movies here are much longer than most of those on YouTube, but of exceptional historic quality. Pare Lorentz's classic documentary The Plow That Broke the Plains is about half an hour. About 10 years ago, I spent $75 to buy it on videotape. Now anyone can get it for free.

Other than the kind of movies, what distinguishes these sites from YouTube is the ability to download clips onto your computer. From there, it becomes possible to embed them into a PowerPoint presentation, show them directly from an external storage device or even directly off your desktop if you can call that up in your classroom. Like YouTube, the Library of Congress cannot guarantee that all the films it has are outside copyright protection, but educational users can certainly count on the persistence of its resources more than nearly anything else on the web.

Undoubtedly, there are countless intriguing clips of historical value on YouTube and the internet at large that have yet to come to the attention of most historians, including me. To see the ones I cite in this article and the other clips that I've used in class (as of April 2008), you can click the hyperlinks in the text above if you're reading the electronic version of this article or visit my YouTube user page at www.youtube.com/user/jonrees11, which includes links to all my saved favorites. I also write about other aspects of teaching history with YouTube on my personal history blog, More or Less Bunk [http://moreorlessbunk.wordpress.com]. These posts discuss other clips that I have found useful and by the time you read this will include a call for commentators to leave URLs for clips they've found useful but which I haven't mentioned. Perhaps as a professional community we can begin to map these invaluable teaching tools together.

—Jonathan Rees is an associate professor of history at Colorado State University-Pueblo. He is the author of the forthcoming Rockefeller's Cross: Employee Representation at the Colorado Fuel and Iron Company, 1914–1942. He can be reached at Jonathan.Rees@colostate-pueblo.edu.