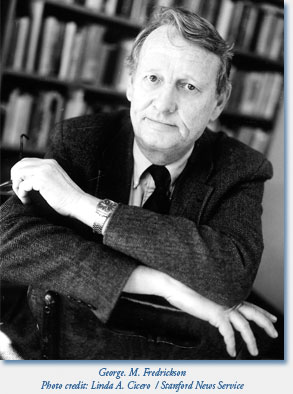 Former president of the OAH; renowned historian of race

George M. Fredrickson, the Edgar E. Robinson Emeritus Professor of History at Stanford University, died at home on February 25, 2008, of heart failure. He was a pioneer in the study of comparative ideologies of race and racism throughout the world, as well as an award-winning teacher.

A prolific writer, Fredrickson authored eight original books, edited four more, and wrote numerous articles. His most acclaimed works were his comparative histories of race relations in the U.S. and South Africa, including White Supremacy: A Comparative Study in American and South African History (1981), which won the Ralph Waldo Emerson Prize and the Merle Curti Award and was a finalist for the Pulitzer Prize and the National Book Award. Several other books also garnered major awards, including the Anisfield Wolf Award in Race Relations for The Black Image in the White Mind: The Debate on Afro-American Character and Destiny, 1817–1914 (1971); the Thomas & Znaniecki Award for Not Just Black and White: Historical and Contemporary Perspectives on Immigration, Race, and Ethnicity in the United States (2005, co-edited with Nancy Foner); and the Choice Outstanding Academic Book of 2003 for Racism: A Short History (2003). Fredrickson's most recent book, Big Enough to Be Inconsistent: Abraham Lincoln Confronts Slavery and Race, based on his 2006 W.E.B. DuBois Lectures at Harvard University, was published the week before he died.

George Fredrickson was born on July 16, 1934, in Bristol, Connecticut, and grew up mostly in Sioux Falls, South Dakota. He received his AB from Harvard University, magna cum laude, in 1956, then studied at the University of Oslo on a Fulbright Scholarship, and spent three years in the Navy. He completed his doctoral degree at Harvard under intellectual historian Donald Fleming. His first book, The Inner Civil War (1965), was a major contribution to the intellectual and institutional history of the United States. Fredrickson chronicled the influence of the Civil War on major intellectual figures of the era, including Ralph Waldo Emerson and Oliver Wendell Holmes. This research into the Civil War era, as well as his personal experiences during the 1960s, triggered an abiding interest in slavery, abolitionism, and racial ideologies.

Fredrickson's most important works focused on the history of race and racism in the U.S. and throughout the world. The Black Image in the White Mind (1971) examined the ways in which whites north and south established differing ideologies of black inferiority that were used to justify both pro-slavery and anti-slavery movements before the Civil War, and laid the groundwork for virulent racism following emancipation and into the first decades of the 20th century. Fredrickson's sweeping analysis remains central to our understanding of racial ideology in the United States of that time.

Fredrickson's comparative works on race and racism in the United States and South Africa, White Supremacy; Black Liberation: A Comparative History of Black Ideologies in the United States and South Africa (1995); and The Comparative Imagination: On the History of Racism, Nationalism, and Social Movements (1997) solidified his standing as one of the leading historians of race and racism, and also established him as the premier comparative historian of his generation. His Racism: A Short History (2002) explored the emergence of anti-black and anti-Semitic ideologies in the West from the Middle Ages to the present.

At the end of his life, Fredrickson returned to a focus on racial ideology in the U.S. Civil War era. His final book examined Abraham Lincoln's ideas about slavery and race. The title referred to a quotation from W.E.B. DuBois: Lincoln was "big enough to be inconsistent" in his thinking on slavery and race—to change his views to a more expansive belief in the equality of blacks as citizens. But Fredrickson reluctantly concluded that the president's commitment to states' rights meant he would have been unlikely to support the Fourteenth Amendment had he lived.

George Fredrickson taught at Harvard and Northwestern universities before moving to Stanford University in 1984. Known as a committed and beloved undergraduate teacher, Fredrickson received the Allan V. Cox Medal for Faculty Excellence Fostering Undergraduate Research from Stanford University in 2000. At Northwestern and Stanford universities, Fredrickson was also a mentor to many graduate students, who appreciated the seriousness, fairness, and respect with which he fostered their intellectual development. He was especially proud to have directed a substantial number of dissertations by African American students at a time when there were few in the academy. Fredrickson also served as president of the Organization of American Historians in 1997–98, contributed regularly to the New York Review of Books, and lectured around the world.

Fredrickson was an activist as well as a scholar, participating in civil rights marches in the early and mid-1960s, and taking a leading role in the South African divestment movement at Stanford in the mid-1980s. As he told the San Jose Mercury News during the divestment campaign, "The thing I have worked on for the last 20 years has been the history of race relations. . . . I tried to study racism in a rather clinical way, but when confronted with racism I have a rather strong reaction. And there's a side of me that says that you shouldn't just study it." On that score, he never changed his mind.

Albert Camarillo, the Miriam and Peter Haas Centennial Professor in Public Service at Stanford University, called Fredrickson "a man of many dimensions. . . . He was a man of enormous intellect who was deeply committed to the values of equality, justice and opportunity. . . He was a gentle, big man. I never heard him say a mean word about anyone—other than he didn't like racists."

George Fredrickson retired from Stanford University in 2002, but continued to be active in both public and academic life. He is survived by his wife of 52 years, Helène; his daughters Anne, Laurel, and Caroline; his son, Thomas; his sister, Lois; and four grandchildren.