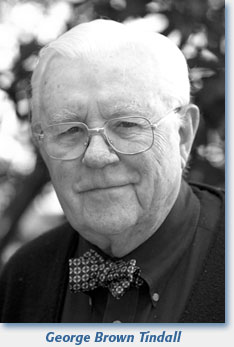 George Brown Tindall, Kenan Professor of History emeritus at the University of North Carolina at Chapel Hill, died December 2, 2006, in Chapel Hill at the age of 85. Tindall, who served as president of the Southern Historical Association in 1973, was one of the nation's pre-eminent historians of the modern South. His writing was characterized by a combination of deep scholarship, a willingness to challenge conventional historical assumptions, and a clear and uncluttered style that reflected his commitment to The Elements of Style by E.B. White and William Strunk, a well-thumbed copy of which always sat on his desk.

Tindall's iconoclasm began at an early age. His family ran a hardware store in Greenville, South Carolina, where he grew up during the 1920s and 1930s, but his outlook was hardly typical of the South of that era. As a senior at Furman University, then a small Baptist college in upcountry South Carolina, he edited the campus literary magazine with his future wife, Blossom McGarrity, and contributed a wide range of fictional and non-fictional writing. Some insight into his early sensitivity to issues of race can be seen in one of his short stories in which he subtly and sympathetically described the class tensions surrounding the courtship of an upcountry black couple at a time when most whites were oblivious to the complexities of African American life. And in the aftermath of the Japanese attack on Pearl Harbor, he urged his readers to reject the angry cries for revenge. "Remember Pearl Harbor," he wrote. "We faintly recalled having heard it before. ‘Remember the Alamo!' ‘Remember the Maine!' all of which, being translated, mean ‘Remember to Hate.'" Instead, he urged his fellow students to work to create a different postwar world. And that meant examining critically the institutions and the prejudices that surrounded them.

After serving four years in the Army Air Force, he enrolled in graduate school at the University of North Carolina at Chapel Hill and eventually worked under the direction of the distinguished Southern historian Fletcher Green. But Tindall hardly chose the typical topic of a young, white Southerner beginning an academic career. Instead, he wrote his doctoral dissertation on the struggles of black South Carolinians in the dark days of the post-Reconstruction era. South Carolina Negroes, 1877–1900 broke new ground in African American and southern history when it was published in 1952. What seems most striking today is the way in which Tindall avoided the condescension and careless prejudices that had marked the work of earlier white historians writing about black life in America. Long before the term "agency" had become commonplace, he treated the black actors in his story as something other than villains or victims, showing their struggles to surmount the growing climate of racist repression that shaped South Carolina's social and political life in the 19th century. At a time when Plessy v. Ferguson was still the law of the land, he bluntly described segregation as an institution designed for the same purpose as slavery: "maintaining the subordination of the Negro by a caste system based on race." Throughout the 1950s and afterwards, he and his wife, Blossom, quietly but persistently opposed all forms of discrimination in their professional and personal relationships.

After brief appointments at three other universities, Tindall returned to Chapel Hill in 1958, where he remained until his retirement in 1990. During his 32 years at Chapel Hill he directed 26 dissertations and published more than 40 articles and a half dozen books including The Disruption of the Solid South (1972), The Persistent Tradition in New South Politics (1975), and a collection of influential essays, The Ethnic Southerners (1976). As an informal adviser to the Southern Growth Policies Board in the 1980s (chaired by Arkansas Governor Bill Clinton) he persistently reminded board members of those Southerners who had been bypassed by the economic progress of the postwar era. The final report—"Halfway Home and a Long Way to Go"—reflected his unwillingness to embrace a celebratory vision of the Southern past.

Perhaps his greatest impact upon the profession can be seen in two quite different books. The first was The Emergence of the New South, 1913–45 (1967), published in the Louisiana State University Press's History of the South series. Each of the 20 chapters in the 807-page volume was a model mini-monograph, superbly researched, elegantly written, and drawing together the complex stories of black and white Southerners struggling through the economic, social, and political transformations of the critical years from World War I through World War II. In a 1994 essay in The New York Review of Books, historian Charles Dew described Emergence of the New South and C. Vann Woodward's Origins of the New South (1951) as "the twin peaks of New South historiography."

America: A Narrative History, published in 1984 by Norton Press was an anomaly on several levels. At a time when most historians rushed toward multiauthored "social history" texts, Tindall was a single author, writing about all of American history. (Historian David Shi later joined Tindall in revising the book for subsequent editions.) While America reflected the insights of a new generation of historians, Tindall introduced complex ideas to his young readers by placing them in a graceful narrative that emphasized the centrality of culture, religion, and politics. It would become one of the most successful textbooks of the last two decades, selling more than one and a half million copies.

Although he wrote about serious issues, George Tindall was a master of a wry wit that he used to great effect—but only on the pompous, the arrogant, and the morally indifferent. He rightly gained the admiration and affection of those who knew him.