Creating a Virtual Student Community at the University of Maryland

The sudden explosion of internet-based classes has sparked concerns and debates within higher education, focused on issues of instructional quality, faculty and student preparation for this new format of learning, plagiarism prevention, and intellectual property rights, among others. At the University of Maryland University College (UMUC), the history department is especially concerned with the issue of student involvement in the life of the program, the university, and within the broader profession. The UMUC history program seeks to duplicate the student-to-student and student-to-department interactive contacts one ideally finds at a strong small liberal arts campus by creating a virtual student community embracing an ever growing number of globally dispersed history majors.

Founded in 1947, the University of Maryland University College consists of three main branches. The university has a proud tradition of providing educational opportunities to the men and women serving in the armed forces, a legacy reflected in the fact that classes are offered by UMUC-Asia and UMUC-Europe at over 150 sites overseas, including Afghanistan. UMUC-Adelphi (referred to as "stateside") provides classes to non-traditional and working adult students at sites in Maryland. With the introduction of internet classes, the university has been transformed into one of the largest public providers of online education in the U.S., if not the largest. During fiscal year 2005, UMUC enrolled approximately 75,000 students in all programs worldwide, a figure which is projected to grow by 90 percent by 2015.1

This huge growth in a distributed format poses unique challenges and opportunities for the UMUC history program. Since January 2000, the department has been organized and coordinated on a global scale. In the following year the curriculum was overhauled and a new BA history major replaced the previous General Studies degree. But the introduction of online classes has had the greatest impact, as seen in Figure 1, illustrating the program's stateside enrollments over seven academic years. In academic year 2001, the first year of delivering history classes via the internet, students enrolled in online classes as often as face-to-face. By 2005, online enrollments accounted for nearly 85 percent of the stateside program's total enrollments. 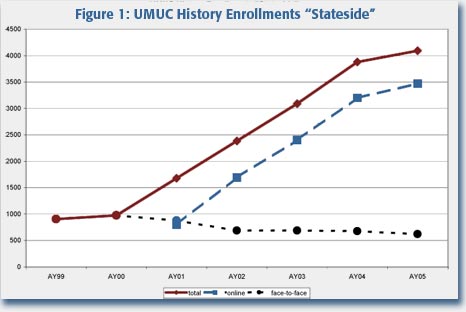 This growth means that creating an inclusive community of history students and encouraging academic excellence—and at times simply maintaining contact with students—are major priorities for program success. Toward these ends several rather traditional efforts were made in early 2000 to attract majors and involve them in the life of the history department. For example, the department initiated an annual essay contest, providing an incentive and rewards for student research and writing for the past six years. UMUC history t-shirts were sold to raise funds for student activities, and to provide a collective identity. And the department took every opportunity to bring faculty members and students together face-to-face.

Without a doubt the most important of these efforts is PHAT 999, a secure online discussion site into which all students seeking a history major or minor are automatically enrolled. Since the UMUC delivery platform requires a four-letter designator, the site uses the letters from the national history honor society's name, PHi Alpha Theta, giving an acronym that always brings a smile. Created in fall 2001 with less than 200 students, PHAT 999 grew to 1,212 history students in May 2005, including all officially declared history majors worldwide, plus students seeking a minor in history and alumni. The site is renewed annually, and the student roster reviewed and updated several times during each academic year. Faculty moderators monitor all discussions, publicize professional events and opportunities of interest to students, and maintain direct contact with every UMUC history major worldwide.

With the introduction of the history major and of online history classes, and with PHAT 999 as a tool for reaching all history students, the number of students seeking to complete their degree in history increased dramatically, as illustrated by Figure 2. In fall 1999, there were approximately 35 majors stateside; by fall 2001 the number had reached 136. In academic year 2003 approximately 500 UMUC students worldwide were pursuing a BA in history; in 2004 the number was over 650. By May 2005 there were 969 majors worldwide. Of these, there were 522 history majors stateside, less than half living in Maryland and the Washington, D.C., metropolitan area. In UMUC-Europe the number of majors doubled from 189 in academic year 2004 to 367 in 2005. 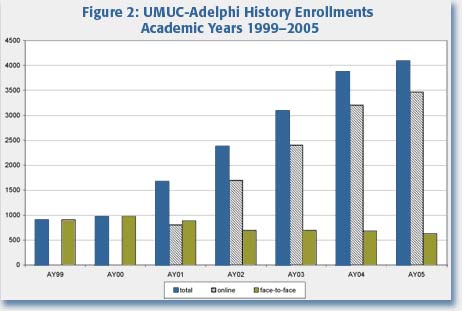 Along with creating a space for student interaction, membership in the Phi Alpha Theta history honor society was established as the marker of student achievement among UMUC history students, an effort supported by the society's national director. By setting a standard of excellence that all students could work toward, while providing activities that all students could participate in, the "local chapter" provides the heartbeat within the larger student body. The honor society sponsors "guest speakers" within PHAT on topics of student interest, in particular on graduate studies, teaching certification, and career opportunities. With the growing number of majors and increased student efforts to achieve, the number of initiates into Phi Alpha Theta has risen steadily, from its low point of four initiates in 1999-2000, to 39 in 2004–05, and to 43 in 2005–06. By providing an immediate activity to participate in and contribute to, co-hosting the regional Phi Alpha Theta conference in 2002 rejuvenated the UMUC chapter. Since then UMUC history students have attended and actively participated in every Mid-Atlantic regional conference as presenters and panel moderators, including one who flew in from Spain to present his research in 2003. In 2006, in addition to attending their own regional meeting, UMUC students attended other meetings in Arizona, North Carolina, and New Jersey, and presented an entire panel at the 2006 national biennial meeting.

The newest project of the members of the honor society is perhaps the most indicative of the global dispersion of UMUC's students, and is also the most innovative, inclusive, and collaborative project undertaken so far. Unable to hold a traditional initiation ceremony for inducting members into Phi Alpha Theta, the UMUC chapter experimented with various online initiations for several years. During 2005–06, the project took a new turn. All history majors, not just the honor society members, were asked to submit digital pictures of places of historical importance from around the world. Several hundred photographs were uploaded into a discussion area within PHAT, and then sorted and matched to the text of the full Phi Alpha Theta initiation ritual, presented on DVD with voiceover narration and additional materials.

The Importance of the AHA and Other Professional Organizations

But this student activism has spread far beyond the usual undergraduate activities. At the 2004 meeting of the American Historical Association, the American Association for History and Computing sponsored a panel "Online History, the Students' Perspective" that included undergraduate students from UMUC and Florida Gulf Coast University and a graduate student from the University of Illinois at Urbana-Champaign. The AHA has been particularly encouraging of undergraduates, a welcome that enabled UMUC students to attend the meetings in Washington, D.C., in 2004, Seattle in 2005, and Philadelphia in 2006. The Organization of American Historians extended a similar welcome for its 2006 annual meeting. In the past two years, students have been recognized by the American Academy of Political and Social Sciences Junior Fellows program, a honor that both recognizes their achievements and encourages advanced study.

This experiment in creating a virtual student community has worked far better than anticipated. The department can contact any of its students easily, although there is a bit of drudgery involved in the basic administrative work of maintaining the site. Student isolation is prevented, and student enthusiasm to participate in every professional opportunity is evident in the collaborative projects they undertake and student interest in our larger profession. Graduates of the UMUC history program are entering graduate and professional programs in increasing numbers, including programs at the University of Maryland Baltimore County, the University of South Florida, Georgetown University, the University of California at San Diego, as well as the innovative online MA programs at Sam Houston State University and Ft. Hays State University. By establishing eligibility for the honor society as a standard of student achievement, among other measures, the department encourages and rewards student excellence. These successes would not have been possible without the encouragement, the example of professional involvement, and the very generous support offered by the worldwide history faculty. But ultimately the success of the UMUC history students is due to the energy and enthusiasm of the students themselves, who have sought every opportunity to become active, involved, and included historians.

—Bud Burkhard served as collegiate professor and UMUC academic director for history 1999–2006. He attributes the growth of the program to the worldwide UMUC history faculty and the history students, and thanks them all.